Milley was allegedly “certain” that Trump “had gone into a serious mental decline” following his loss in the 2020 election and worried that the former president could “go rogue,” according to excerpts of the book “Peril” reviewed by CNN. He also told his senior staff that “you never know what a president’s trigger point is,” the authors allege.

The top U.S. general allegedly called a secret meeting at the Pentagon two days after the Capitol riot to review the process for military action — including a nuclear response, according to the book. Milley allegedly asked every senior military official present at the meeting not to take orders from anyone, even the former president, regarding a nuclear strike without consulting him first.

“No matter what you are told, you do the procedure. You do the process. And I’m part of that procedure,” he allegedly said. The book alleges he went around the room and looked each official in the eye, asking for verbal confirmation that they understood. 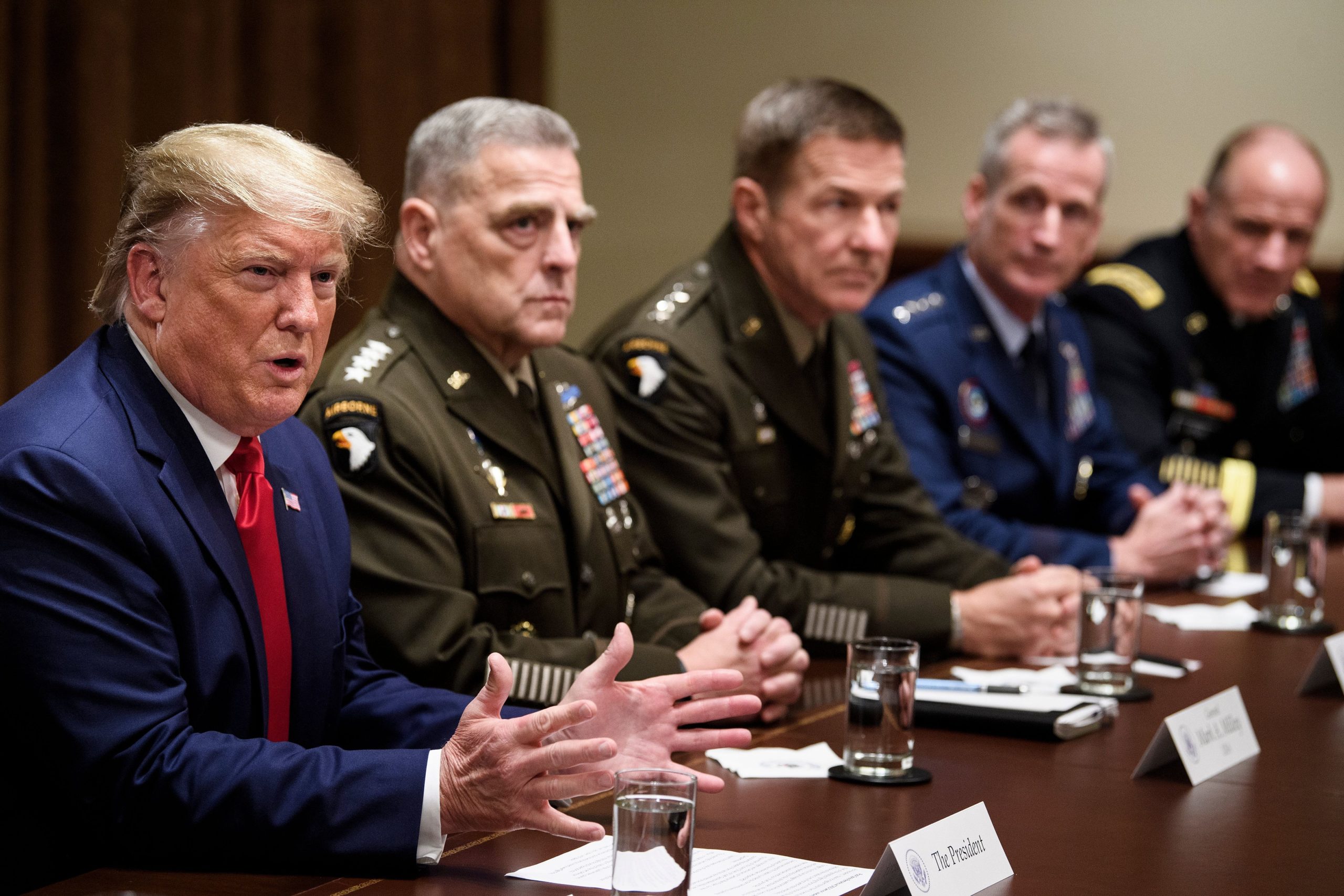 Chairman of the Joint Chiefs of Staff Army General Mark A. Milley (2nd L) and others listen as President Donald Trump speaks during a meeting with senior military leaders in the Cabinet Room of the White House Oct. 7, 2019 (Brendan Smialowski/AFP via Getty Images)

Before ordering a nuclear launch, the president would likely consult with the vice president, his White House advisers, U.S. Strategic Command, the Joint Chiefs of Staff and the Secretary of Defense. MIT nuclear strategy expert Vipin Narang told the The Washington Post in a January interview that none of those officials are in the nuclear launch chain of command.

Narang made clear that the president has the “sole authority” to order a nuclear launch and anyone who disrupts the chain of command by refusing an order from the president “would be doing so illegally and risk the charge of mutiny.”

Milley’s concern about Trump making unpredictable moves toward the end of his presidency came from personal experience, according to the book. The authors noted that Trump had signed a military order after the election to withdraw all troops from Afghanistan by Jan. 15 without the knowledge of his national security team.

Milley described the former president as engaging in erratic behavior after the election, stating that he was “screaming at officials and constructing his own alternative reality about endless election conspiracies,” according to the book.

Woodward and Costa wrote that Milley “felt no absolute that the military could control or trust Trump and believed it was his job as the senior military officer to think the unthinkable and take any and all necessary precautions.”

Milley spoke with House Speaker Nancy Pelosi about Trump’s behavior following the Capitol riot, according to a transcript of the call obtained by Woodward and Costa. He allegedly tried to assure Pelosi that the nuclear arsenal was safe, the authors wrote. (RELATED: Gen. Milley Allegedly Promised To Warn China In Case US Prepared Military Strike)

“What I’m saying to you is that if they couldn’t even stop him from an assault on the Capitol, who even knows what else he may do? And is there anybody in charge at the White House who was doing anything but kissing his fat butt all over this?” Pelosi allegedly said, according to the transcript. “You know he’s crazy. He’s been crazy for a long time.”

“Madam Speaker, I agree with you on everything,” Milley allegedly responded.

The general also told his top service chiefs to watch everything “all the time” following the call with Pelosi, according to the book. He allegedly urged then-National Security Agency director Paul Nakasone and then-CIA director Gina Haspel to do the same.

Woodward and Costa wrote that he was effectively “overseeing the mobilization of America’s national security state without the knowledge of the American people or the rest of the world.”

“Peril” is Woodward’s third book covering the Trump administration and is set to be released Sept. 21.