A Loudoun County Public School district counselor is facing criminal charges after she allegedly had an “inappropriate relationship” with a student from 2013 to 2015, according to the Loudoun County Sheriff’s Office.

Former counselor Ann Barrett, 42, was accused by a custodian of taking “indecent liberties” with a high school student, according to Fox 5. The relationship took place between 2013 and 2015, according to investigators. An investigation began in May 2021 after the Sheriff’s office became aware of the incident.

The victim was a student at Freedom High School. Further information regarding the victim’s identity has not been released, according to the county sheriff’s office. 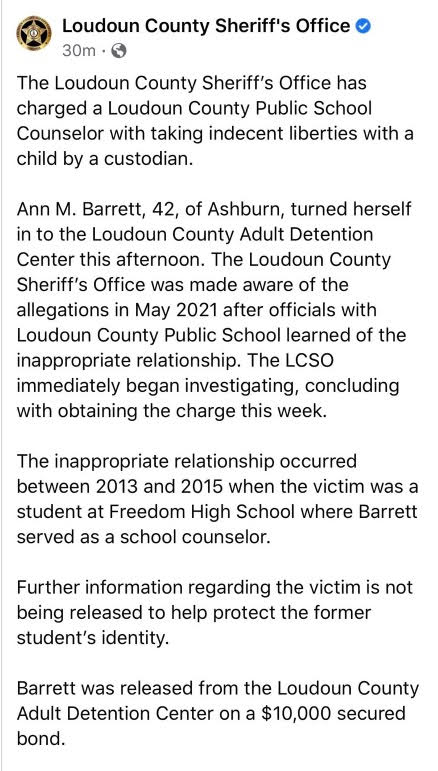 Loudoun County Public Schools have been rocked with accusations of sexual assault over the past couple of weeks. One teen was found guilty of sexually assaulting a teen in a high school bathroom in May 2021. (RELATED: Judge Finds Skirt-Wearing Teen Boy Guilty Of Sexually Assaulting Female Classmate In Loudoun County School Bathroom)

The Loudoun County school board initially claimed it was not aware of the “specific claims” relating to the sexual assault allegations, though reporting from WTOP uncovered that the district’s superintendent emailed board members on the day of the assault.

Reports of another sexual assault came from an LCPS middle school. According to the Loudoun County Sheriff’s Department, a seventh-grade boy at Harmony Middle School was allegedly “touching other students inappropriately over their clothing.”

Virginia Attorney General-elect Jason Miyares said during an interview that he will investigate how prosecutors and law enforcement in Loudoun County handled these sexual assault cases.