FBI Director Christopher Wray “made it clear” during an October speech that FBI agents “would not be attending school board meetings” and the Bureau “would stay in its own lane,” a former agent who saw the speech told the Daily Caller News Foundation.

Cecil Moses, a retired FBI special agent and former police chief in Alabama, was in Scottsdale, Arizona, for the national conference for the Society of Former Special Agents of the FBI, where he said Wray met with former agents on Oct. 22 and assured them that the Bureau would not be monitoring school board meetings.

“He made it clear he didn’t want it to be any misconception, that there’s going to be FBI agents out there looking over the shoulder of parents or monitoring school board meetings and the like,” Moses told the DCNF. “He made the comment that the Bureau will stay in his own lane and I think that’s a very, very cogent comment.”

Parents across the country have joined a nationwide movement against what they believe is harmful ideology permeating American public schools. Many parent activists have shown up at school board meetings to air their grievances, which were likened to “the equivalent to a form of domestic terrorism and hate crimes,” by the National School Boards Association (NSBA) in a Sept. 29 letter to President Joe Biden’s administration.

On Oct. 4, Attorney General Merrick Garland’s Department of Justice (DOJ) issued a memorandum instructing the FBI to “use its authority” to work with local law enforcement to investigate parents who have contributed to a “disturbing spike in harassment, intimidation, and threats of violence” following the NSBA letter. Parents fought back against the characterization.

Moses said the memorandum issued by Garland was “ill advised” and “really caught the bureau by surprise.” He stated that he doesn’t believe the memo was discussed prior to release in the way a statement of that nature normally would be.

Moses said his familiarity with the investigative guidelines that were promulgated by the DOJ memorandum leads him to believe that what Garland proposed violates of the department’s own guidelines, regarding what the FBI can and cannot do with respect to private citizens. 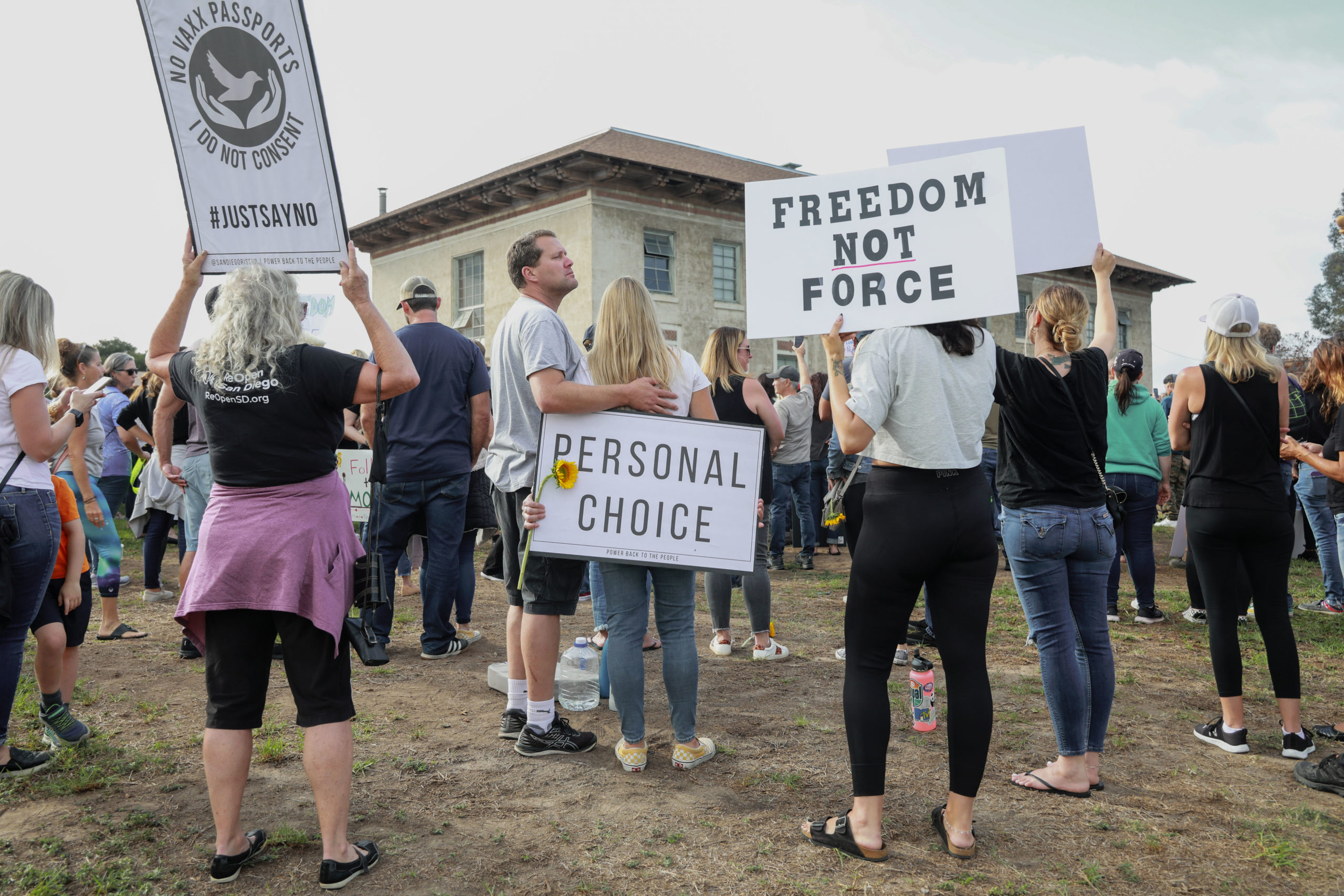 Anti-vaccine protesters stage a protest outside of the San Diego Unified School District office to protest a forced vaccination mandate for students on September 28, 2021 in San Diego, California. The School District was holding a virtual hearing on whether to enact a mandate for students to receive at least one dose of a COVID vaccine. (Photo by Sandy Huffaker/Getty Images)

“We have to be very careful to not deem unsavory talk or horrible ideas and speech as being terrorism, because you have a right in this country to free speech,” Mark Vines, a former FBI agent and host of the podcast “The Mark Vines Show,” told the DCNF. “People say stupid things, people say evil things, people say bad things. But you have a right to do that, as long as you’re not harming other people.”

The standards that must be met are referred to as the “domestic terrorism triad,” Vines said. First, the perpetrator must be committing a crime, second, through that crime, they must be trying to further a social or political agenda, and third, it must be done through the use of force or violence.

All three prongs are required to constitute a domestic terrorism case, which Vines said he is not aware of at any school board meetings.

“I think Christopher Wray knows that … he’s painfully aware that that’s not the role of an FBI agent,” Vines said. “But is he going to say that publicly? Well, I guess that’s a good way to get fired by your boss.”

“I did have some people tell me that they were at a luncheon and heard him say that, which would make sense to me now,” Vines added.

Frank Runles, a former FBI special agent and host of the “Lies People Tell” podcast, agreed with Vines that Garland himself probably knows his memorandum is not within FBI jurisdiction.

If a threat is communicated in a way that impacts interstate commerce across state lines, whether it’s through the mail, phone or the internet, the FBI would have jurisdiction and would address that, but local conflicts don’t fall under that category, Runles told the DCNF.

“The question is, why does he do it?” Vines asked. “It was to put a chill, it was to send a message to the American people: don’t do this, because we’re gonna come after you. Now, the reality is different, but it doesn’t matter. It seems like this administration, much of this is messaging,” Runles said.

The only reasoning Vines said he can come up with to issue such an order is that the officials in the current administration are ideologues so deeply intrenched in their ideology that it has taken on a religious-like importance in their minds.

“These are true believers in what they’re doing,” Vines said. “That’s my only explanation for it, because otherwise it makes zero sense.”

Runles said the FBI has become a politicized organization that operates at two levels.

“The FBI that’s inside the beltway, that’s the artificial FBI that gets all of the press because they’re the ones doing the bidding of the political wheelers and dealers,” Runles said. “Then you have the real FBI, that’s all the agents, people out there in the field just trying to put bad guys away and protect the public,” who he said are equally up in arms with the FBI’s current actions regarding parents.

FBI bureaucrats who have spent their whole career climbing the ranks in Washington, D.C., live in a bubble, which is a “completely different mindset of anywhere else in the FBI” and things that happen in D.C. would never be tolerated in a field office, Runles said.

Field agents across the country are “sure as hell are not interested in mom and dad being pissed off at the Loudoun County School Board,” because they have a right to be “pissed off,” Runles said. It is their constitutional right to speak their mind and say “mean things, as long as it’s not threatening,” he added.

“Parents are allowed to say ‘you guys suck and you need to resign,'” he said.

“We are not investigating peaceful protests or parent involvement in school board meetings,” Garland said. “There is no precedent for doing that and we would never do that. We are only concerned about violence and threats of violence against school administrators, teachers, staff.”

A lot of the FBI’s problems can be attributed to cronyism, which happens through the promotional system that allows people who have a particular political agenda to surround themselves with others who have a similar agenda, Vines said.

“The organization at the highest level, seventh floor level has become very, very left wing,” he said. “To the point of almost being Marxist.”

In his memo, Garland directed the FBI to work with every U.S. attorney and federal, state, local, tribal, and territorial leaders in each federal district to discuss strategy for threats and “open dedicated lines of communication for threat reporting, assessment and response” within 30 days of his statement, which Runles said is “nonsense.”

Garland’s memorandum talked about what seemed like a task force to field calls and address potential threats against school board members, which is “absolutely not necessary,” because every local, state and federal agency already knows how to report threats under the current system, Runles said.

This type of communication already exists across the country, which was set up by the Joint Terrorism Task Forces (JTTF) following 9/11 for the purpose of having specific “communications avenues in every major field division in the FBI,” Vines said.

There are currently around 200 JTTFs across the country, which are the U.S.’s front line of defense against both international and domestic terrorism, according to the FBI’s website.(RELATED: ‘There Are No Conflicts Of Interest,’ Garland Responded To Questioning Over His Son-In-Law’s Pro-CRT Education Company)

“When Merrick Garland puts this memo out saying we’re establishing communication procedures with all these different agencies … Merrick Garland doesn’t understand the system he already has a place,” Vines said. “That system has been in place since 2001, and has been very, very effective.” 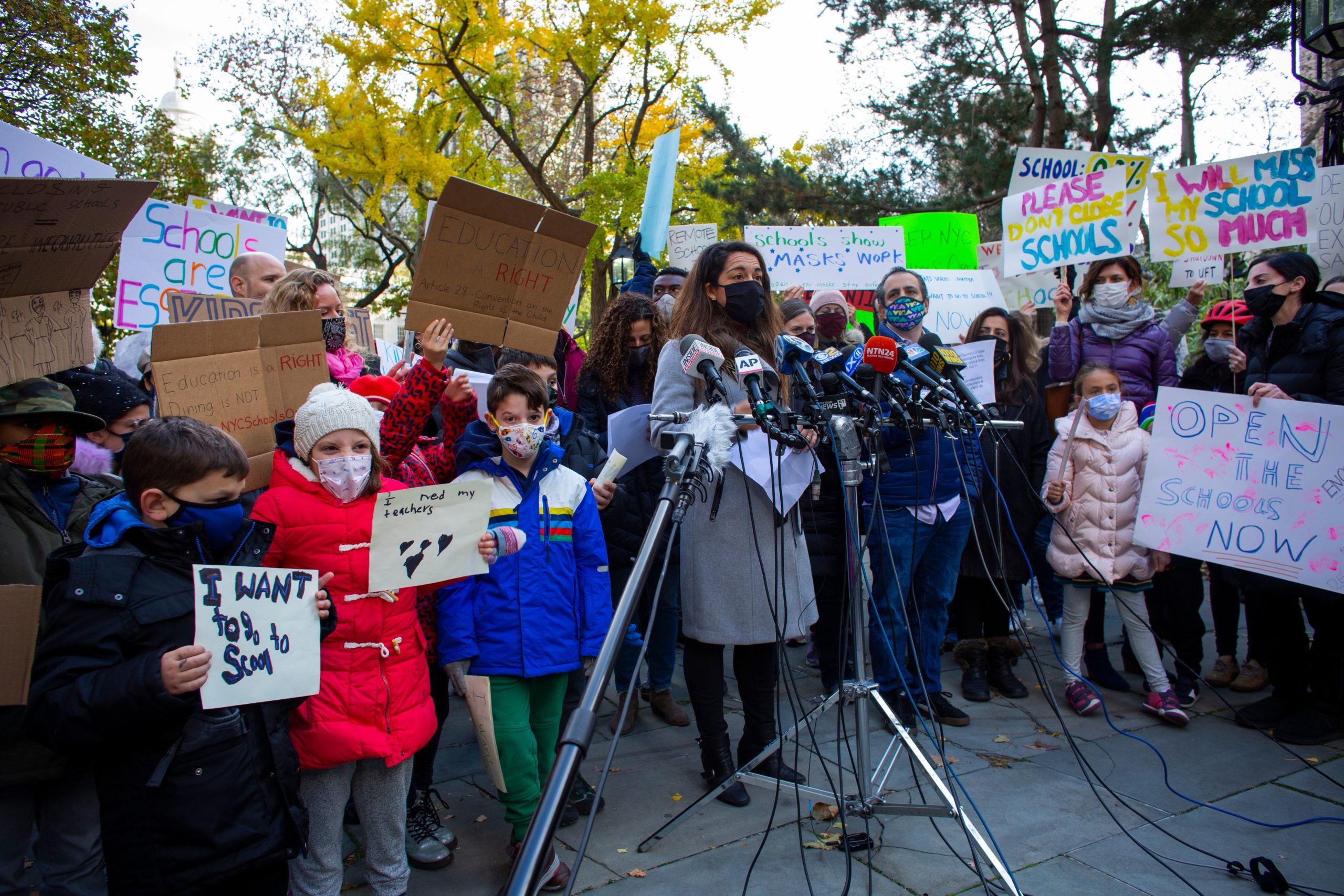 Runles believes the memo was issued for public consumption to let the the American people know, specifically rowdy parents, that the FBI has their eye on them and can use the tools at its disposal if they so choose.

“I don’t doubt that Chris Wray is saying in front of audiences, especially retired agents who are completely up in arms about this, saying, ‘Yeah, no, no, no, we’re not gonna do that,'” Runles said. “This is purely for show.” (RELATED: Merrick Garland Cites Unexplained Threats Of Violence To Involve Authorities In Culture War Issues)