While there is agreement between large factions of both Republicans and Democrats that social media companies should be liable for certain third-party content hosted on their platforms, the parties differ on what that content should be, and why platforms should be liable in the first place.

“Wednesday’s hearing made clear that Republicans and Democrats have drastically different solutions to hold Big Tech accountable,” Republican Rep. Cathy McMorris Rodgers, who serves as Ranking Member on the House Energy and Commerce Committee, told the Daily Caller News Foundation. “Republicans are fighting for free speech, while Democrats continue to push for more censorship and control. Bipartisanship will not be possible until Democrats agree that we need less censorship, not more.” 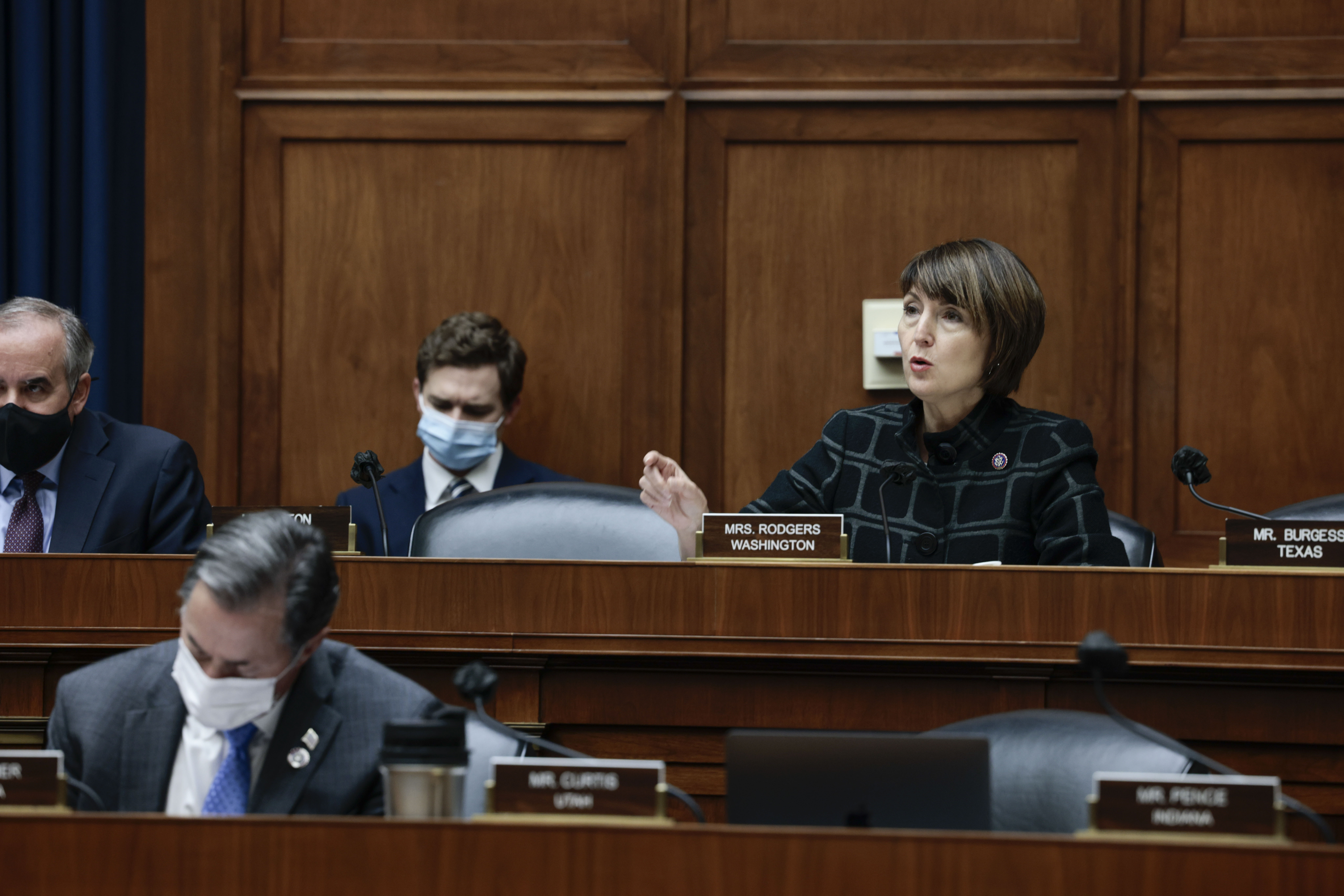 WASHINGTON, DC – NOVEMBER 16: Rep. Cathy McMorris Rodgers (R-WA) speaks at a hearing with the Subcommittee on Environment and Climate Change in the Rayburn House Office Building on November 16, 2021 in Washington, DC. The hearing was held to discuss clean energy solutions for the current supply chain crisis. (Photo by Anna Moneymaker/Getty Images)

Republicans have long seen Section 230 as a tool to prevent social media platforms from censoring conservative content, whereas Democrats have made clear that they intend to use Section 230 reform to incentivize tech companies to remove more content, particularly “misinformation” and “hate speech,” and alter which content companies promote with recommendation algorithms.

So far, no Section 230 reforms aimed at addressing hot-button issues like censorship or misinformation have been enacted. And despite a flurry of proposals in the past few years from both sides of the aisle, Congress has only passed one major bipartisan piece of legislation targeting Section 230: the FOSTA-SESTA package signed into law in April 2018, which exempts conduct that promotes or facilitates sex trafficking from liability protections. (RELATED: Is Anything Actually Going To Happen To Facebook?)

“A lot of what you hear from Democrats is concerns about misinformation regarding health and elections, and a lot of concerns that you hear from Republicans is they feel conservatives are unfairly censored by tech forums,” Jeff Kosseff, cybersecurity law professor at the United States Naval Academy, told the Daily Caller News Foundation. “It’s hard to reconcile those two perspectives.”

This fundamental divide was evident at Wednesday’s hearing, in which Democrats excoriated Republicans for using Section 230 to obtain “a license to have the right to lie without consequence,” and touted several bills intended to push companies to take down more “misinformation” on their platforms.

US President Donald Trump waves goodbye to the media after signing H.R. 1865, the “Allow States and Victims to Fight Online Sex Trafficking Act of 2017” at The White House in Washington, DC, April 11, 2018. (Photo by Chris Kleponis-Pool/Getty Images)

“The Democrats’ idea is that if we threaten you with lawsuits, you’ll start taking more things down,” Daniel Lyons, law professor at Boston College Law School who testified at the hearing, told the DCNF. “The real effect is going to be increased content moderation and a reduction in total speech available, because, if platforms choose to do anything, they’ll take down lots and lots of content out of fear of being sued.”

The most recent of Democrats’ Section 230 proposals, the Justice Against Malicious Algorithms Act (JAMAA), is intended to hold tech platforms liable for content, particularly misinformation, algorithmically boosted on their platforms. If enacted, the law would remove liability protections from platforms that recommend “personalized” content contributing to “physical or severe emotional injury” of a user.

“Technology companies like Facebook say their platforms give every user a voice, but they amplify some voices over others,” Democratic Rep. Jan Schakowsky said when announcing the bill. “The Justice Against Malicious Algorithms Act holds these companies accountable for the severe harm they cause by spreading dangerous information.”

Another Democrat proposal considered at the hearing, the Protecting Americans from Dangerous Algorithms Act, would remove Section 230 liability protections for certain content in an attempt to “hold large social media platforms accountable for their algorithmic amplification of harmful, radicalizing content that leads to offline violence.”

“Liability is just a means to an end—the objective is to incentivize changes to the algorithm,” Democratic Rep. Tom Malinowski, who co-sponsored the bill, told Wired. “The premise of the bill is that without the incentives created by liability, they’re not likely to make those changes on their own, but that they do know how to make things better and would do so if there’s sufficient pressure.”

The proposals have failed to earn support from Republicans, who view Democrats’ attempts to incentivize tech platforms to remove misinformation as a backdoor for political censorship.

“While the Section 230 bill before us today pushes for more censorship, Republicans are fighting for free speech,” McMorris Rodgers said in her opening remarks at the Wednesday hearing, referring to JAMAA and characterizing it as “a thinly veiled attempt to pressure companies to censor more speech.”

McMorris Rodgers, along with other top House Republicans including Reps. Jim Jordan and Bob Latta, unveiled a host of draft bills taking aim at Section 230 from several different angles in July. (RELATED: Jim Jordan Announces Plans To Make It Easier To Break Up Big Tech)

The bills prioritize protecting users’ online speech, with one bill spearheaded by Jordan and McMorris Rodgers seeking to “remove liability protections for companies who censor constitutionally protected speech on their platforms, require appeals processes, and transparency for content enforcement decisions.”

“Our hope is Democrats choose to defend that foundational principle and abandon their censorship desires,” McMorris Rodgers told the DCNF. “Only then can we come together to hold Big Tech accountable.”

‘One Area For Bipartisan Cooperation’

The Senate has fared better than the House in finding common ground on Section 230 reform, albeit related to less politically-charged issues. The PACT Act, reintroduced by Democratic Sen. Brian Schatz and Republican Sen. John Thune in March, would make Section 230 immunity conditional on platforms issuing biannual transparency reports and making certain content moderation decisions public, as well as establishing a complaint system and removing illegal content in a timely manner.

Sen. John Thune (R-SD) appears during a Senate Finance Committee hearing to examine the expected nomination of Janet Yellen to be Secretary of the Treasury on January 19, 2021 on Capitol Hill in Washington, DC. (Photo by Andrew Harnik-Pool/Getty Images)

“I still believe that if there’s one area for bipartisan cooperation this Congress it’s reining in Big Tech, and I’ve introduced bipartisan legislation that proves it’s possible,” Sen. Thune told the DCNF. “Focusing on the urgent need to make these companies more transparent and accountable, which is exactly what my PACT Act does, is the best way to achieve meaningful, bipartisan results.”

Thune and Schatz’ bill sidesteps thornier, hot-button issues like political censorship and misinformation while incentivizing platform transparency, a compromise that may enable it to skirt more partisan lines of criticism. (RELATED: Facebook’s Whistleblower Could Be The Best Thing To Ever Happen To Big Tech)

“What I worry about is that there will be some kind of massive bill where some of the liberal priorities and some of the conservative priorities are all put together, even if they conflict with one another,” Kosseff told the DCNF. “And at that point Section 230 becomes entirely useless, because it’s not clear how a platform can operate if it’s basing these competing obligations from the government to both not carry content and to carry content.”