The Mantis X10 Elite combines the utility of each Mantis X model into a single system, and the X10 Elite works with pistols, shotguns, rifles, and bows. It uses the same Mantis X application (updated from the original as per most apps) as the original system. The X10 Elite incorporates a simplified method of attachment to the firearm versus the original Mantis X that I have, and it is smaller and lighter than the Mantis X. It appears to have increased sensitivity, as it didn’t drop any of my dry fire shots as the original device did every once in a while. I found it an excellent aid for dry firing in particular.

Wow! It figures – for whatever reason, rising crime, urban unrest, etc., a lot of us in the US have been buying guns recently. Moreover, for whatever reason, the ammunition to go along with those guns is scarce and expensive. What is a shooter to do? The conventional wisdom is to dry-fire your guns, even every day — particularly the guns that you may depend on to defend yourself or your family. Dry firing requires no ammunition (in fact, one must dry fire with no ammo in the gun or anywhere nearby), and it can be done in a safe area in your home, garage, shop, etc.

Unfortunately, unless you had some basic gun handling and marksmanship training, dry firing practice with a handgun is nearly useless. In fact, it may be harmful to your shooting skills.

Why? Unless you are very self-aware and are trained to use the correct sight alignment, grip, and trigger control, and can make a mental sight picture of where your gun is pointed and how the sights are aligned at the instant the trigger “breaks,” you do not have the skill necessary to self-criticize and correct problems with the aforementioned shooting skills. Without some way of telling, you are forming muscle memory habits that may become bad habits, making your dry-fire drills a waste of time or worse. The Mantis X10 Elite system is an aid to learning proper grip and trigger management.

How do I know? More than 40 years ago, I was a member of the US Air Force Academy Intercollegiate Pistol Team. As a teen living in a rural area, I learned gun safety from my dad, and he taught me basic marksmanship with a rifle and a shotgun. He admitted to having no pistol skills, so until I joined the team as a cadet, I had no training with handguns. Fortunately, our team coach was a pistol competitor in the Olympics and in the National Matches, and was an excellent teacher. I learned the above-mentioned skills from him, and they have since held me in good stead as the Officer-in-Charge of an RAF station shooting team, and as an NRA Certified Pistol Instructor.

Even though I already had these skills, I found the new Mantis system an effective aid to reinforce them, and a boon to dry fire practice.

In the long-ago and faraway times (so it seems) prior to the Covid uproar, I attended Shot Show. During my perusal of the multitude of booths and displays, I stopped at the Mantis booth and listened to their explanation of the shooting trainer device they called the Mantis X. I listened to the booth person’s explanation of the system, tried it on one of the neutered pistols they had at the booth, and decided to get one to use at home and on my range.

The Mantis X system came with the rail-mounted sensor, a USB charging cable, Bluetooth connectivity, and a hard shell (Pelican-type) carry case. The sensor attached to a pistol rail with a screw clamp, and to holster the weapon I had either to remove the device or use a holster designed for a handgun with a light in the same mounted position as the Mantis X.

After that, I used a Mantis X off and on for several years, but I’ve found the Mantis X10 Elite is a definite upgrade to the older system. The X had problems tracking dry fire practice on some of my pistols, but so far, the X10 Elite system has not. The new system made my dry fire practice more useful and enjoyable, because I now had external feedback on my grip and trigger manipulation during the firing sequence. That’s one of the problems dry firing without a coach or something like the Mantis system; with no feedback, if we aren’t already trained to recognize problems we will just keep clicking the trigger merrily away, possibly forming bad muscle memory habits. If we are trained already, we can lie to ourselves and accept poor gun handling as good follow-on training. The Mantis system helps prevent both situations.

So, what does the MantisX10 Elite do? It precisely senses movements of the gun on which it is mounted, and captures those movements for a brief time as you move the trigger until it breaks. The gun-mounted sensor sends that information to the Mantis X application on your mobile device via Bluetooth, where the app massages the data to display gun pointing, gun movement and recoil information in several sub-applications. Pictures are worth many words, so I took some screenshots of a couple of my practice sessions, dry fire and live fire.

The application also presents several drills and courses that you can use as guides to your practice, including an introduction to the Mantis system that helps you learn to use the application.

Of course, the first time you use the application on your mobile device, you have to set it up. The setup, however, is simple and only takes a minute or two. The instructions are located entirely within the application’s setup pages, and there are several videos on YouTube that might prove helpful if you have difficulties using the system.

I took a photo showing a side-by-side comparison of the old Mantis X device versus the new Mantis X10 Elite system. 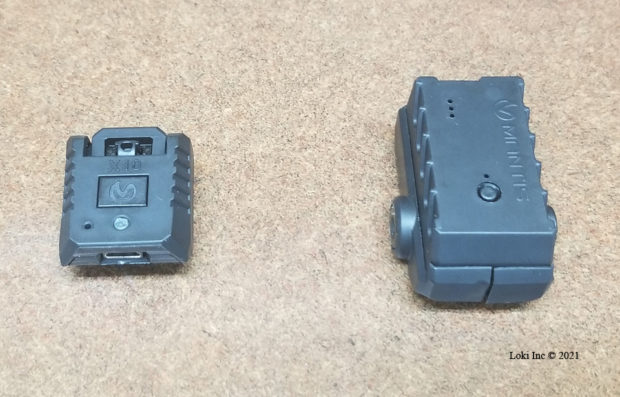 Good things definitely come in small packages! I also took a couple of photos showing the X10 device attached to the dust cover rail on one of my pistols, a SIG P220. 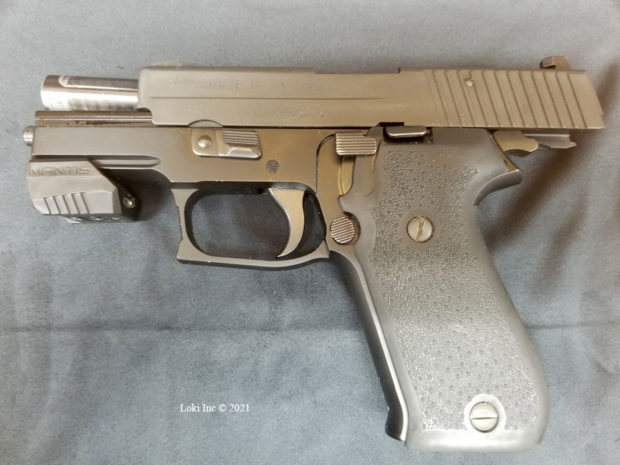 The Mantis X10 Elite system came with the sensor, a clamp and hardware useful for creating a mounting surface on a round part of a firearm, a USB cable, and a short section of Picatinny rail with attachment hardware. If your firearm already has a short rail section available in a good spot on the gun, you can attach the sensor directly to that rail section by merely pulling a spring-loaded lock out of the way while you slide the sensor onto the rail. Then, release the lock to secure the sensor in place.

So, if you want a great way to improve your dry fire practice during this dry spell of ammo availability, or if you have access to training ammunition and you want a “coach” to give you grip and trigger manipulation feedback during live fire training, get a Mantis X10 Elite. Watch your shooting skills improve quickly with just a little practice.

Dr. Jason Baird is a graduate of the United States Air Force Academy and Air Force Institute of Technology. He has a Ph.D. with a field of study in Mining Engineering and Explosives Engineering. Dr. Baird is currently the president of Loki Incorporated, a firm specializing in engineering services to the explosives, propellant, and pyrotechnics industry.