Joe Roebuck was a mechanical design engineer with an imagination as wide as the SCCY. Not a “gun guy,” he wasn’t saddled with traditional beliefs or methodologies regarding the designing and building of firearms. So, in 2003, he began SCCY Industries (changed from “Skyy” to avoid confusion with the vodka of the same name), first in South Daytona and now located in Daytona Beach, FL.

The original guns, the 9 mm CPX-1 and CPX-2 (distinguished by the presence and absence of a thumb safety, respectively) flew off shelves. Sure, they were hammer-fired with 9-pound trigger pulls, but they had a plethora of things going for them: They were cleverly designed and well built, with four-point barrel lockup (called Quad-Lock) and a transferable lifetime warranty. The fact that they were hammer-fired gave them second-strike capability; you could pull the trigger again on a balky primer. They were also lightweight at less than a pound empty. They were soon available in an array of colors, both traditional and outlandish. And, they had an almost unbelievably low price—well under $300. 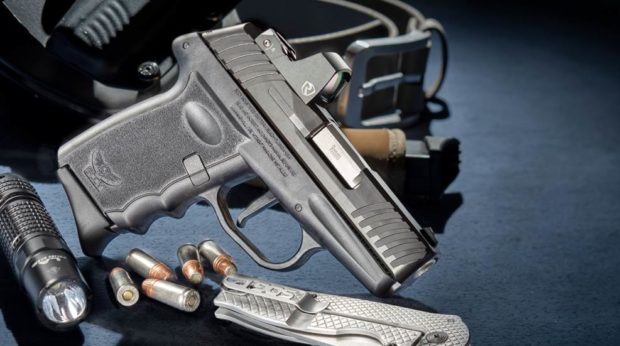 The high-quality Riton MRDS didn’t include a battery and had to be sighted in • A rear sight is integral to the Riton, but the notch is absurdly shallow, while the front post does not co-witness with the dot • Takedown was fast and simple using a flat-head screwdriver or even a case rim • Extended mag bases enhanced leverage, while the rear cocking serrations offered ample purchase for racking.
–

Those are the concrete details, but what really made SCCY different were the concepts of “Presence” and “Value.”

Presence is just me coining a term. It doesn’t refer to impressiveness, gravitas or awe. Rather, it means that a gun of adequate defensive chambering is sized and designed to allow it to be present when and where it is needed. I’ve been arguing this point for years, so I won’t belabor it here, but in terms of self-defense, a small, light 9 mm on your hip is infinitely more useful than an all-steel M1911 in your gun cabinet (or even stashed in your car). SCCY pretty much got that correct right from jump. But, size and weight alone aren’t the only criteria for Presence. A gun of similar size that retailed for $2,500 would not have Presence for a lot of consumers because they’d never be able to put one in their holster in the first place.

Bear in mind, too, that those who most need a gun are often those who can least afford one. They may not have a lot of disposable income and, in turn, might not live in the best areas, nor have the best law enforcement coverage and/or response times. Offering such consumers a reliable gun that they could afford and weren’t getting ripped off on (thanks to that reassuring life-of-the-gun warranty) ensured that SCCY pistols were a big hit with the truly needy, not just the merely frugal.

Value—not just the price of the gun, but the price in comparison to everything you get (both features and accessories) and to what else is available in the marketplace—conjoins with Presence. SCCY pistols may not have had the best trigger pull out there, the best ergonomics or trigger reset or whatever, but their Value was and remains industry leading.

The company’s latest introductions are the DVG-1 and the DVG-1RD (tested here). These pistols retain SCCY pistols’ basic virtues, but elevate beyond the company’s previous efforts and affordably join the big boys in terms of the latest features.

The DVG-1 is a polymer-frame, striker-fired pistol with a flat-faced trigger having a 5.5-pound pull. The DVG-1RD is much the same except the rear iron sight is replaced by a Riton-brand micro-red-dot sight (MRDS). Striker-fired, a flat trigger and a red-dot sight? Those pretty much define the leading edge of current carry-pistol technology. But, these are SCCY products and, once again, the stunner is the price. The DVG-1 lists for $299.99, while the DVG-1RD has an MSRP of $399.99. To put that into perspective, many MRDS alone cost more than that. That this is the result of magic, I’ll not question. The included Riton 3 Tactix MPRD 2 is no cheap slouch. It has an aluminum frame, coated lens and auto-shutoff with a “shake-awake” feature (all lacking in the MRDS originally intended for inclusion). It’s claimed to be water- and shock-proof and offers a 50,000-hour battery life. 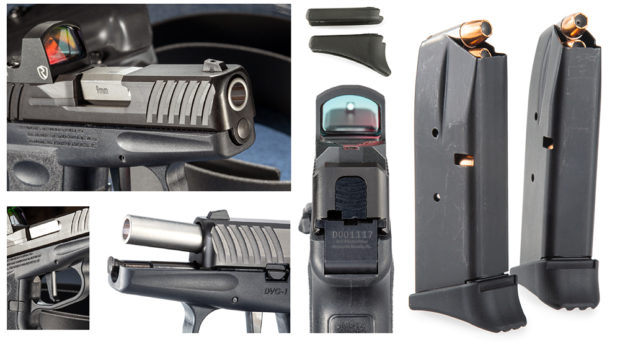 There are handsome front-cocking serrations, though the gun is a bit stubby to be placing your hand so far forward. You’ll be tempted to use the MRDS to rack the slide, but it’s better to use the rear serrations, slingshot style • The flat, unbladed trigger breaks a few degrees past vertical • Incorporated into the dustcover is a groove which helps index the support thumb or serves as a rest for the trigger finger • Extra magazine floorplates are a bonus, though we’d stick with the extended ones for the DVG-1RD model • Both magazines were initially quite stiff, but broke in well during testing, as did the rest of the pistol • Clean lines and a good job of dehorning at the factory made for snag-free draws and adequately comfortable shooting with the right loads.

–
The Same, But Different

The DVG-1 and the DVG-1RD are two very different guns for two pistols that are essentially the same, MRDS notwithstanding. Each comes with four floorplates, two flush fit and two with finger extensions (these do not change magazine capacity). The flush-fit units allow only a two-finger hold on the grip. As pistols like the Glock G26, HK P30SK and Walther PPQ Subcompact have shown, that is not really a hindrance to shooting nor popularity. While you can install either the flush floorplates or the finger-extension floorplates on one or both magazines for either gun, I feel the best setups are as follows: The flush floorplates for the DVG-1 and the finger-extension floorplates for the DVG-1RD.

With the low-profile iron sights, minimized height (with the flush floorplates) and a 15-ounce weight, the DVG-1 can just barely qualify as a pocket gun for average-to-large folks wearing jeans or heavy cargo pants and using a pocket holster. The weight won’t “pants” you and you’ll have enough room to reach in and get a firing grip before drawing. Of course, it’ll still carry just fine as a belt gun, if you prefer.

The MRDS of the DVG-1RD makes it a belt gun. You’re going to have to use a covering garment anyway, so the added height of the finger-extension floorplates won’t matter in concealed carry. Where they will matter is in shooting. Noted MRDS expert Scott Jedlinski has explained that when most shooters are having trouble quickly locating the dot, the dot is usually high up and that pinky pressure offers essential leverage for getting the dot on target in a hurry.

Whichever gun I chose, I’d set up both magazines to be identical, as you wouldn’t want a new “feel” to your pistol in the middle of a gunfight if you had the misfortune of having to defend yourself.

The 3-MOA dot is bright, well-defined and precise enough for reasonable self-defense engagement distances. It doesn’t co-witness with the front post, though. The sight stayed firmly mounted after battery installation and the easily adjusted dot held its zero for the length of the evaluation.

When I first dry-fired the pistol, I happily noted that the trigger break (which, at only 5 pounds, 3 ounces, was lighter than advertised) disturbed the sight picture less than any new pistol in memory. However, on the range, my initial impression of the shooting characteristics of the DVG-1RD was not great. It was quite flippy with American Gunner ammunition, even when compared with other lightweight handguns. However, I soon noticed that muzzle flip was greatly diminished when switching to both Federal and SIG Sauer loads.

The nested recoil springs proved rather heavy. I handed the pistol to a healthy young woman familiar with firearms, and she was not able to rack the slide. That’s a critical problem, not just for some female shooters but also for disabled or older male shooters, or anyone lacking hand strength. Try it before you buy it. A gift certificate to a gun store is always the best option when getting someone the right handgun.

Speaking of stiff springs, I was at first able to load only nine rounds in one of the magazines that was supposed to hold 10. As this was a new gun, I suspected the problem might go away with break in, and it did, with each magazines holding a full complement of ammo by the end of testing.

With the extended floorplates on the magazines, the gun feels “funny” when you put pressure on the pinky groove trying to find that red dot. The reason is because the backstrap is so abbreviated compared to the frontstrap with that setup, you feel something should be pressing into your palm, but isn’t. It’s just a quirky thing, but it takes some getting used to.

The slide often failed to lock to the rear after the last shot. This happened frequently with both magazines. I finally realized this was dependent on ammunition, but wasn’t certain if it was the result of the brand, bullet weight or chamber pressure. I stumbled on the solution when I fired a box of +P ammunition without issue. That straightened things out, even when I went back to other ammunition. I also mixed cartridges of different brands and bullet weights in the same magazines to further test reliability and had only one failure to feed. Overall, the gun proved reliable, getting progressively better as it broke in, particularly after a little judicious lubrication.

Are the SCCY pistols a great value? Un- equivocally, yes. Are the DVG-1 and DVG-1RD great pistols? Nope. They go bang reliably and with sufficient precision, but so do my regular carry guns. The difference—apart from my guns’ slightly better ergonomics—is my “mid-price” guns cost about twice as much as the SCCY pistols. There was a time when I couldn’t afford mid-range pistols (and I still can’t swing high-end ones). I don’t forget what that was like and I’m not so arrogant as to think those days cannot return. It’s comforting to know that, if they do, I can look to the SCCY for salvation. 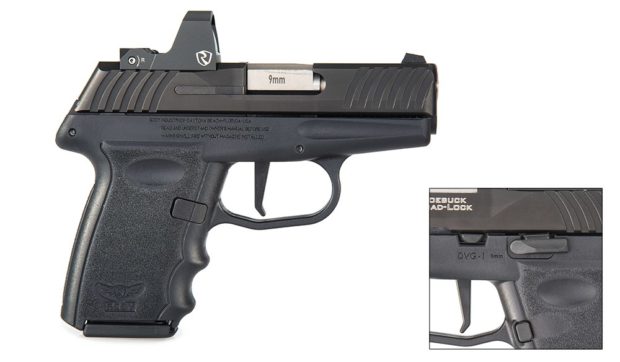