1) Who introduced you to hunting and the shooting sports?

I have fond memories accompanying my father on hunting excursions at a young age. When I was little, I had a little toy six-shooter by my side while we walked through cornfields together. Being introduced to hunting early in life, as many Nebraskans are, helped me develop a love of the outdoors and Nebraska’s rich outdoor recreation heritage. 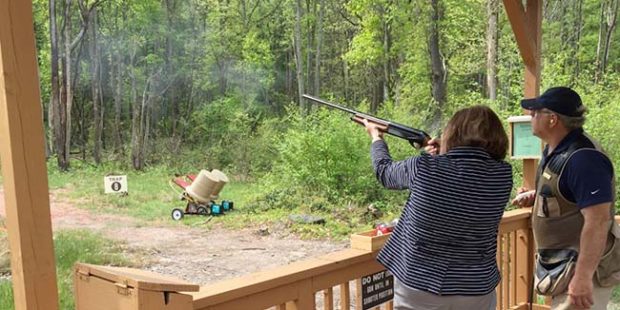 2) What was your most recent shooting sports/hunting experience?

My husband and our sons hunt birds. Members of our staff and I have participated in pheasant hunts and other similar outings, which is always a great time.

I truly love clay target shooting. It’s a great way to test your shooting skills, stay sharp and improve your handling skills. We set up a target thrower back home on the ranch, which is a lot of fun. There is no better feeling than yelling “Pull!” and hitting a target.

4) Which piece of pending legislation related to the firearm industry is particularly important to you and why?

In the Senate, I am a cosponsor of the Federal Firearms Licensee Protection Act (S. 2449), which would heighten criminal penalties to address increased “smash-and-grab” thefts at federally licensed gun dealers and better protect FFLs. I also have been an original cosponsor of the Constitutional Concealed Carry Reciprocity Act (S. 1522) for many years. This bill is important because it would allow individuals who are permitted to carry a firearm to have that Constitutional right in other states, while still complying with those states’ laws.

I’ve long worked to advance legislation defending Americans’ Second Amendment rights. When I was in the Nebraska Legislature, we passed my bill to exempt children under the age of 16 from needing a permit to hunt or fish. This was an important move to support the next generation of Nebraska’s sportsmen and women.

I’m also focused on stopping the Biden Administration’s efforts to chip away at Second Amendment rights. Over the past year, President Biden announced several overreaching executive actions that infringe on the Second Amendment. For example, the President directed the Bureau of Alcohol, Tobacco, Firearms and Explosives (ATF) to take more regulatory authority over specific types of firearms and devices.

5) What do you see as the challenges and opportunities for hunters and shooting sports enthusiasts?

Sportsmen and women are increasingly vilified by the far left. The fact is outdoor recreation is part of the way of life for Nebraskans and so many other Americans. It is critical that we continue to tell our story and educate policymakers and the broader public about the positive role outdoor recreation plays in our communities and our economies.

This interview is from the National Shooting Sports Foundation.