Beginning in May 2019, Collegiate School created a task force designed to reassess whether the school’s motto, seal and mascot were “inclusive,” following video footage of students at a nearby prep school donning black face. The task force asked for the input of students, alumni, parents, past parents, and faculty and staff, according to PDE’s documentation.

The survey results found the community largely supported keeping the traditional symbols. Instead, the task force opted for a complete overhaul. 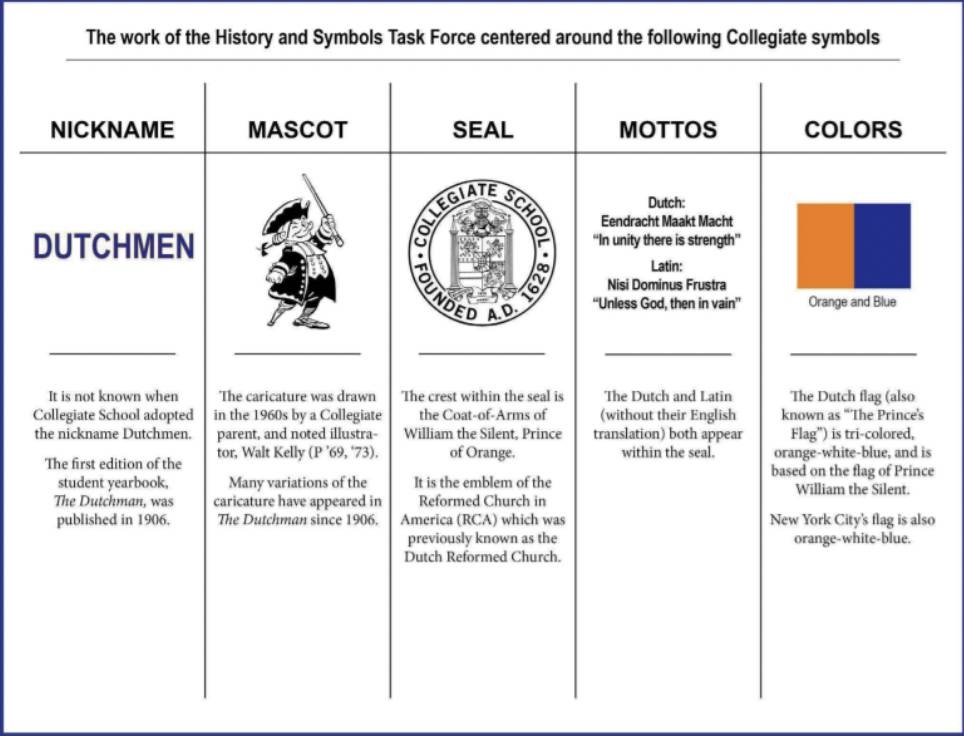 By January 2022, the school had changed the motto and seal to remove “two explicit religious references” to reflect the school’s “legal separation from the Collegiate Church,” according to the task force. The original motto read, “Unless God, then in vain.” It was replaced with the Latin interpretation of “Community, Wisdom, Humaneness.”

The school’s seal was changed to reflect the motto change and removed “A.D.” from the school’s 1628 founding date. The mascot was redesigned to be “more inclusive” as well. The original mascot was a Dutch colonial man with a peg leg. The redesigned mascot shows a faceless Dutchman holding a lantern.

The task force was co-chaired by Rev. John Vaughn, an executive pastor at the Ebenezer Baptist Church in Atlanta. Vaughn works closely with Democratic Sen. Raphael Warnock, according to the church’s website.

Vaughn has a history of praising the Black Lives Matter movement. In an article for the Huffington Post, he applauded BLM for doing the work that he believes the church has failed to do.

“The Black Lives Matter movement is doing what many of our faith communities are still struggling towards,” Vaughn said. “They have created radically inclusive, welcoming communities and are striving to live up to the principles that we more seasoned leaders have taught them.”

Collegiate School also hired Dwight Vidale, the Director of Institutional Equity & Belonging at the school, who also works for a “woke” consulting firm called the Glasgow Group. (RELATED: Inside The Curriculum That Changed An Elite, Private Christian School In Atlanta)

The initial push for internal change at Collegiate began before the resurgence of the Black Lives Matter movement. In February 2019, students at Collegiate — including Vaughn’s son — sent an open letter to the community in response to unearthed videos of students at a neighboring prep school wearing black face at a sleepover.

The letter called for a reevaluation of the school’s culture and insisted that leadership change the mascot, create more “inclusive” curricula and admit more black students to the school. The students claimed that Collegiate is “a place where jokes about rape and gender and sexuality identification have been normalized,” where black people are treated like they are “animals in a petting zoo” and “Latinx students are pejoratively called ‘Mexicans.'”

“Collegiate is a place where many students of color unfairly feel the need to internalize racist and harmful ‘jokes’ in order to assimilate and survive,” the letter read.

The turning point for the school came on June 18, 2020, three weeks after the death of George Floyd. Collegiate’s former headmaster Lee Levison released the task force’s 407-page report and announced that the school would adopt the “unanimous recommendation” to alter the school’s seal, motto and mascot.

Levison said the changes “should not be viewed as an effort to erase history, but rather to reflect our commitment to being a more inclusive and welcoming community.”

Mary Miller, PDE’s Private School Advocacy Associate, told the Daily Caller that some parents want private schools — such as Collegiate School — to keep “politics out of the classroom.”

“The changes at Collegiate School speak to a broader concern about what seem to be politically motivated activist influences on private schools right now,” Miller said. “The parents we’ve spoken with want their children’s private schools to stay true to their original missions and keep politics out of the classroom.”

Collegiate School did not respond to the Daily Caller’s request for comment.