Parents near Atlanta, Georgia are fighting back against curriculum and cultural shifts taking place at one of the area’s top private Christian school, according to documents reviewed by the Daily Caller.

The Westminster Schools in Atlanta, Georgia, is among the countless schools, institutions and businesses that created “diversity, equity, and inclusion” training amid the resurgence of the Black Lives Matter movement in the summer of 2020. The school created an “equity and inclusion” page on its website, began bragging about its diversity rate and vowed to endow $5 million in funds for a “school-wide commitment to diversity, equity, inclusion, and justice.”

Some parents initially believed the effort towards “positive” words such as “diversity” or “inclusion” would be helpful. Until they uncovered that their school-age children would learn LGBT-inspired lessons, be subjected to racial affinity groups and teachers attended webinars on alleged “white racism.”

In 2020, the school’s equity team crafted an “anti-discrimiantion pledge” that was designed for students and faculty to create an “anti-racist” environment. One parent argued that the policy was being used as an excuse to insert “anti-racist curriculum” into the classroom.

An Upper School history syllabus stated that the curriculum was “unapologetically anti-racist,” according to screenshots shared with the Daily Caller.

“A note on how we do history: This is a [sic] explicitly and unapologetically anti-racist curriculum,” the syllabus read. “It energetically rejects the assumption that ‘western’ white European history is somehow automatically superior to other cultures.”

The “indoctrination” is not exclusive to children; approximately 20 teachers and staff members took part in a three-day workshop titled “White People Confronting Racism,” according to school records obtained by parents.

Staff and teachers “examined the historical and cultural context of racism, reflected on their own relationships with race, and worked through strategies for personal action plans,” according to the training’s description.

The race-based workshop was co-led by Dr. Howard Stevenson who has shown support online for critical race theory and Democratic Congresswoman Ilhan Omar’s calls to “defund the police.”

Some parents pointed to a faculty member’s public rebuke of composer Frederic Handel in the school’s Christmas concert program as a step too far. The teacher publicly condemned Handel for his role in the Atlantic slave trade because students were playing one of his anthems. 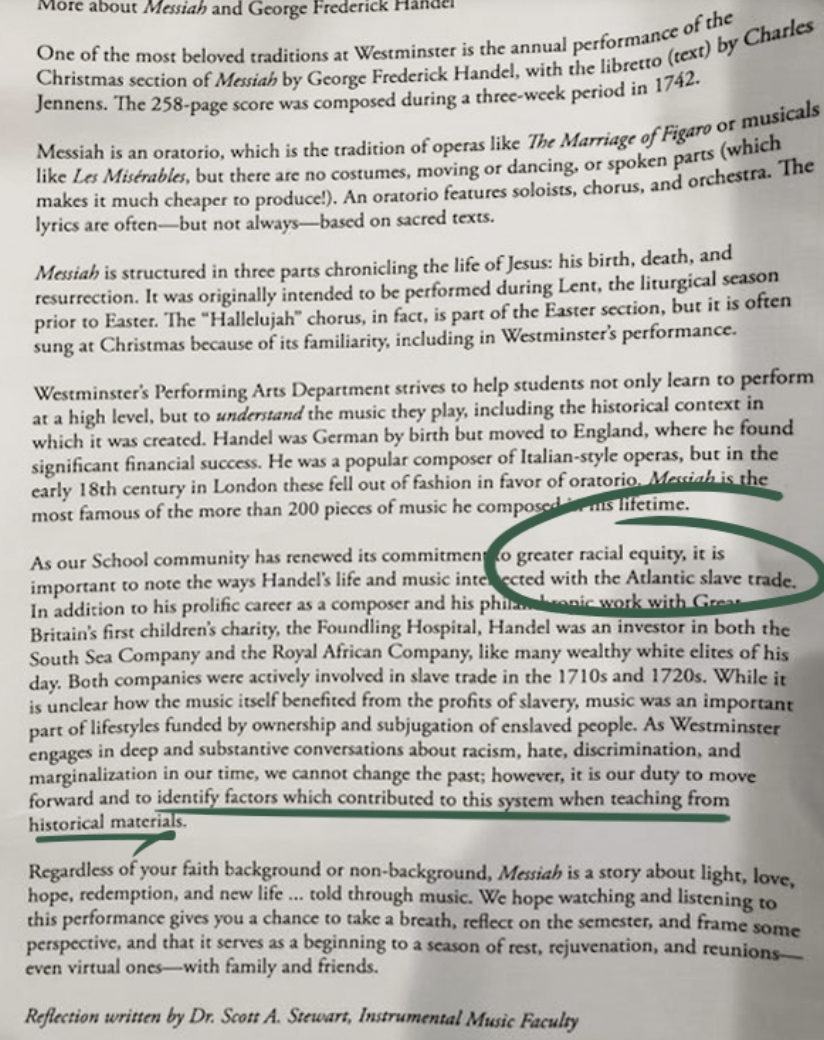 As parents uncovered more evidence of Westminster Schools’ “woke” tactics, parents created a website to compile and track their concerns. Parents noticed glaring similarities between the organizations promoted by the National Association of Independent Schools (NAIS) — the group that accredits Westminster — and the school’s curriculum and culture.

Westminster’s programming for Lower School students includes lessons crafted by the left-wing Anti-Defamation League (ADL) and the education arm of the Southern Poverty Law Center (SPLC), according to documents posted to Wokeminster.com.

The NAIS cites the ADL, SPLC and GLSEN on their website as resources for students, teachers, and parents. Mother Kate Hudson — who is not affiliated with Wokeminster.com — told the Daily Caller that she believes the NAIS and affiliated organizations are taking Westminster “hostage” and potentially threatening their accreditation if they fail to mimic “woke” programs.

Some parents also blame Westminster Schools’ hiring firm Carney Sandoe, which adheres to the principles of diversity, equity and inclusion, for the alleged increase in “woke” educators. Other parents blame Bill Clarkson, the former president of Westminster Schools, and current President Keith Evans for promoting an “anti-racist” worldview over a Christian worldview, on which the school was initally founded.

The NAIS’ People of Color Conference, which teachers and staff from Westminster attended, promoted similar anti-Christian values to those Clarkson and Evans espouse. The NAIS hosted Khyati Joshi, the author of the book “White Christian Privilege.”

Parents are now determined to win back the school they believe was “hijacked” by left-wing ideology and “propaganda.” Hudson told the Daily Caller that she created the organization “Education Veritas” to help parents at 33 private schools in the Atlanta area understand and fight back against schools promoting critical race theory-inspired curriculum.

Hudson said that she feels private schools in the area are pushing out people and alumni, like herself, who built the schools because they have Christian or conservative values. The mother alleged that Westminster’s administration specifically encourages parents who complain to un-enroll their children from the school. Hudson left Westminster following the introduction of “woke” ideology.

The story of “mama bears” fighting against “woke” indoctrination of their impressionable children is not a new story. Last year, two moms in Columbus, Ohio, stood up against an elite private school’s refusal to disclose race-based curriculum. Andrea Gross and Amy Gonzalez were notified that their children would not be allowed to re-enroll in the school due to their activism.

Hudson told the Daily Caller that there are other parents at Westminster looking for legal remedies to the “woke” curriculum.

The Westminster Schools did not respond to the Daily Caller’s request for comment.