Supermodel Hailey Bieber was hospitalized this week with a reported brain condition that doctors believe could be related to COVID-19.

Bieber posted a statement to her Instagram story Saturday, which reads, “On Thursday morning, I was sitting at breakfast with my husband when I started having stroke like symptoms and was taken to the hospital. They found I had suffered a very small clot in my brain, which caused a small lack of oxygen, but my body had passed it on it own and I recovered completely within a few hours. Although this was definitely one of the scariest moments I’ve ever been through, I’m home now and doing well, and I’m so grateful and thankful to all the amazing doctors and nurses who took care of me! Thank you to everyone who has reached out with well wishes and concern, and for all the support and love – Hailey.” 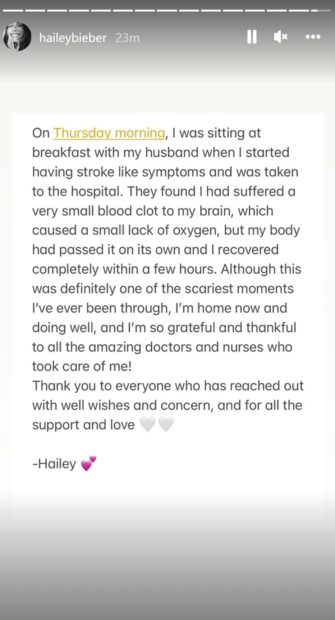 Bieber is only 25-years-old, so doctors ran a battery of tests, including those that would show if the condition is linked to the COVID-19 virus, TMZ continued. Her husband contracted COVID-19 back in February and had to postpone a Las Vegas concert, but has since recovered, according to ABC News.

TMZ was allegedly told that Mrs. Bieber has since been released from the hospital, but doctors are still trying to figure out what caused her illness. (RELATED: Kodak Black, 3 Others Shot Outside Justin Bieber Afterparty)

Researchers at the National Institute of Neurological Disorders have noted the potential for long-term issues related to post-acute complications of COVID-19, which include fatigue, sleep disorders, and other related symptoms. It is unclear whether Bieber caught the virus at the same time as her husband.

Many people who contract COVID-19 develop a condition known as long-haul COVID or “long” COVID, wherein neurological and other major bodily organs realize ongoing symptoms for months, or even years after contracting the initial virus, according to NBC.