The luxury apartment in Washington, D.C. where two alleged Secret Service fraudsters lived assured concerned residents that the suspects won’t be allowed back into the building upon their expected release, according to an email obtained by the Daily Caller News Foundation.

“A number of residents have reached out to us since the conclusion of a federal court hearing this afternoon at which two former residents of the building were released from custody on condition of home detention (away from Crossing DC) with GPS monitoring,” the apartment’s management said in the email to residents Tuesday.

Arian Taherzadeh, 40, and Haider Ali, 36, were arrested April 6 and are accused of posing as Department of Homeland Security (DHS) agents to allegedly build relationships and buy off members of the Secret Service, including one assigned to First Lady Jill Biden’s security detail, according to an affidavit.

The two rented apartments in Crossing, a luxury building located in southeast D.C., allegedly for themselves and for the Secret Service officers, according to the affidavit.

Neither suspect is allowed on the property and their access to their old units was disabled, the email stated. 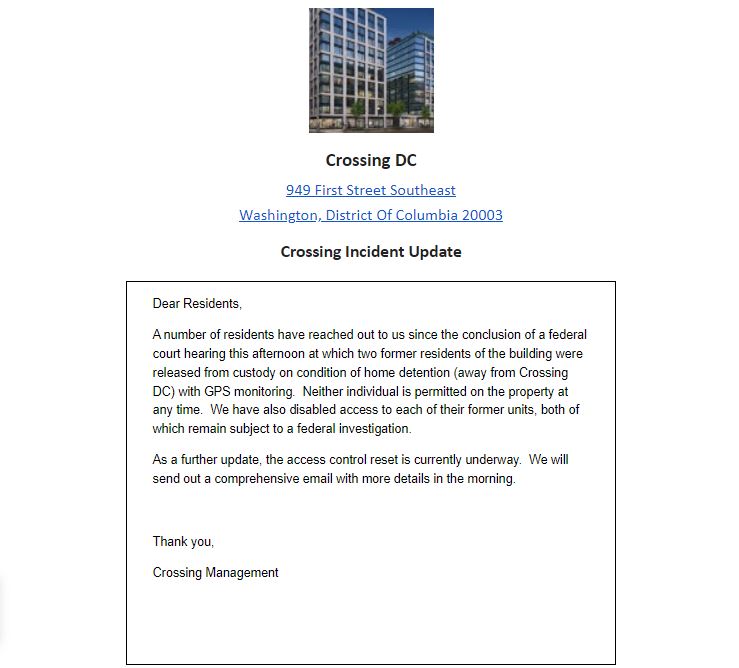 Taherzadeh and Ali would have to stay with family in the Washington area under GPS monitoring to ensure they stay there, according to CNBC.