Such a policy, which prohibits private companies from increasing prices regardless of market conditions, would have catastrophic consequences including energy supply shortages and increased inflation, the economists argued in a series of interviews with The Daily Caller News Foundation. Democrats have alleged in recent weeks that inflation is being driven by corporate price gouging and that Big Oil is using the Ukraine crisis as cover to raise prices and boost profits.

“I just can’t believe they’re dumb enough to do this,” Benjamin Zycher, an economist and senior fellow at the American Enterprise Institute, told TheDCNF in an interview.

“If prices are controlled at below-market clearing levels, then you get shortages because the quantity demanded is greater than the quantity supplied at the legal maximum price,” he continued. “And that’s why you get gasoline lines and allocation controls.”

The House Rules Committee announced that it would review the Consumer Fuel Price Gouging Prevention Act — a bill that enables the president to issue an emergency declaration banning energy prices issued in an “excessive or exploitative manner,” according to its sponsors — on Monday before reporting it to the floor. House Speaker Nancy Pelosi, who told reporters last week that oil and gas companies were exploiting consumers, promised that there would be a floor vote on the legislation this week.

The average cost of gasoline nationwide increased to an all-time high of $4.48 a gallon on Monday, according to AAA data. Natural gas prices have also surged to multi-year highs. 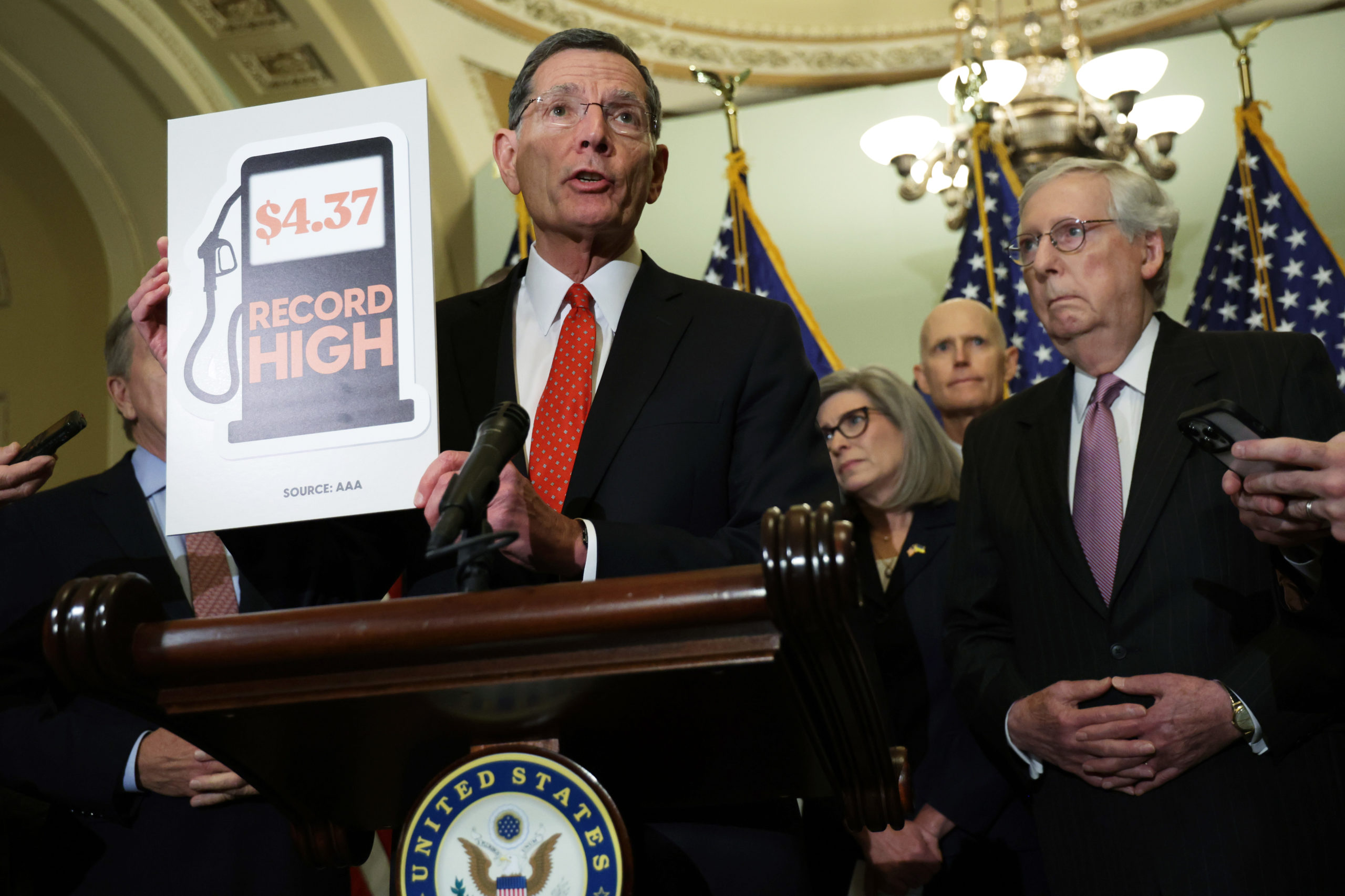 Republican Sen. John Barrasso holds up a sign about gasoline prices on May 10. (Alex Wong/Getty Images)

But just 23% of economists agreed 1970s-era price controls would reduce current inflation levels while 58% either disagreed or strongly disagreed, a January poll from the University of Chicago’s Initiative on Global Markets (IGM) showed. Former President Richard Nixon implemented price and wage controls in 1971 and again in 1973 using powers Congress granted him, leading to gas lines, according to libertarian think tank Cato Institute.

Goolsbee, an economics professor at the University of Chicago, chaired the Council of Economic Advisers during the Obama administration.

“This is kind of obvious. It’s a terrible policy. Go find some of those gorgeous pictures from the 1970s of long gas lines,” economist John Cochrane, a Hoover Institution senior fellow, told TheDCNF in an interview. “Lesson one of economics is: don’t try to transfer income by screwing with prices. But control the price of a thing and there’s less supply and there’s more demand. You get long lines and you get a lot of chaos.”

Institute for Energy Research senior economist David Kreutzer echoed Cochrane’s remarks, arguing that energy price controls would lead to lower investment in oil and gas projects. He also noted that prices are going up in part because of the Biden administration’s anti-fossil fuel messaging.

“What’s going on here is we’re not having quite as robust or as immediate a response from the oil producers in the U.S. as we saw a decade ago when prices skyrocketed,” Kreutzer told TheDCNF. “Part of that is the threat that they won’t be able to collect revenues down the road because the administration is talking about shutting down the oil industry.”

“An important function of prices is to tell investors where to direct capital — where do we need to have more stuff produced? And when you put price controls on petroleum, it messes up that signal,” he added.

Seems the only thing the Harris-Biden admin is building back are the empty gas pumps & long lines from the 1970’s.

Don’t blame me. I voted for Trump! pic.twitter.com/KQdpA2KCQg

In addition, Cochrane noted that examples of price control failures can be seen during the Roman Empire. In 301, Emperor Diocletian issued an edict setting prices on hundreds of goods and services leading to the complete decline of supplies and worse inflation, according to Forbes.

Economists, meanwhile, have also rebuked the argument that oil companies are price gouging amid the Ukraine crisis.

“[Retail gas stations] don’t necessarily drop their price as rapidly as what wholesale prices and oil prices are doing,” Garrett Golding, a business economist tasked with analyzing energy markets at the Federal Reserve Bank of Dallas, told TheDCNF in an interview. “Some people want to call that price gouging because it’s not in lockstep with where wholesale prices are. But the fact of the matter is, what they’re doing is making back the money that they were losing on the way up and that’s how they stay in business.”

Golding and fellow Dallas Fed economist Lutz Kilian published a May 10 paper laying out why gasoline prices haven’t risen and fallen in lockstep with oil prices over the last few months. They said pump prices are also affected by operating expenses such as rent, delivery charges and credit card fees, and that prices are set by retail gas stations, not oil drillers.

Democratic Reps. Kim Schrier and Katie Porter, the sponsors of the Sponsors of the Consumer Fuel Price Gouging Prevention Act, and Pelosi didn’t immediately respond to requests for comment from TheDCNF.