Kameron Marlowe got way too into the music Thursday while supporting Morgan Wallen on his “Dangerous Tour.”

Marlowe took a dive off the stage’s runway while performing his hit song “Burn ‘Em All” at Thursday’s show at The Pavilion at Star Lake, Pennsylvania, Music Mayhem reported. The singer ended up on the floor in the security area between the sold-out crowd and stage, the outlet noted.

Footage of the epic fall was shared on Marlowe’s social media, receiving heartfelt but funny comments from his fellow country music stars. “With grace and elegance,” wrote singer and writer Ernest. 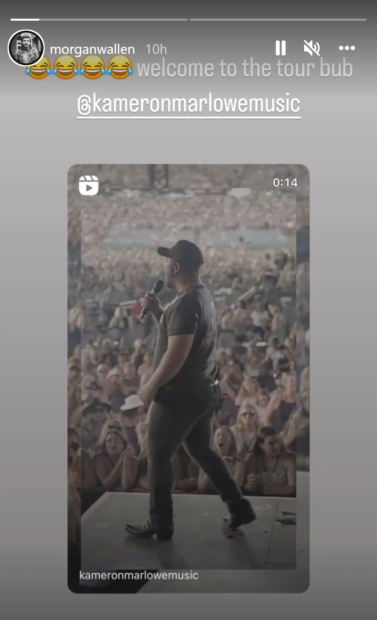 The tour’s headliner, country music superstar Morgan Wallen, shared the video on his Instagram stories. along with four laughing emojis.

“Welcome to the tour bub,” he wrote, tagging Marlowe.

Marlowe did not sustain any serious injuries from the accident, and is currently doing well while icing his back, Country Now confirmed. He’s set to appear at a number of Wallen shows throughout the tour, as well as at various music festivals throughout the summer, the outlet reported.