An Oregon school board terminated the employment of three unvaccinated teachers on Tuesday amid a statewide teacher shortage.

Bend-La Pine School Board in Bend, Oregon, fired three teachers who were unvaccinated because they are in violation of Oregon Health Authority’s (OHA) vaccine requirement, which mandates all educators be fully vaccinated. The board unanimously chose to follow guidance from Superintendent Steve Cook to terminate the teachers. (RELATED: Government Lockdowns Crushed Two Decades Of K-12 Learning)

The firings come as Oregon is facing a statewide teacher shortage, according to Oregon Capitol Chronicle. To fill the vacancies, schools are hiring retired teachers and looking to use salary bonuses to retain teachers.

Among those fired were Mountain View High teacher and football coach Mark Schulz, La Pine Middle School teacher and skiing coach Zachary Webb and Ensworth Elementary school teacher Kelly Lundy. The teachers were put on unpaid leave at the start of the 2021-2022 school year and the decision to terminate the teachers came after OHA made their guidance permanent.

“Your decision here affects more than me and my family,” Webb said at the meeting. “Athletes say they’re not going to ski if I’m not back to coach.”

If the educators chose to fill out religious exemption forms, they would have been permitted back in the classroom, Cook said at the meeting.

“It’s unfortunate that we’re here,” Cook said at the meeting. “But the law is clear. We believe without compliance with the law, our hands are tied.”

Shultz said he was disappointed the board and other educators did not voice their support for the teachers, according to KTVZ News.

“I did not want to give up my God-given constitutional rights by signing the exception,” Shultz said at the meeting. 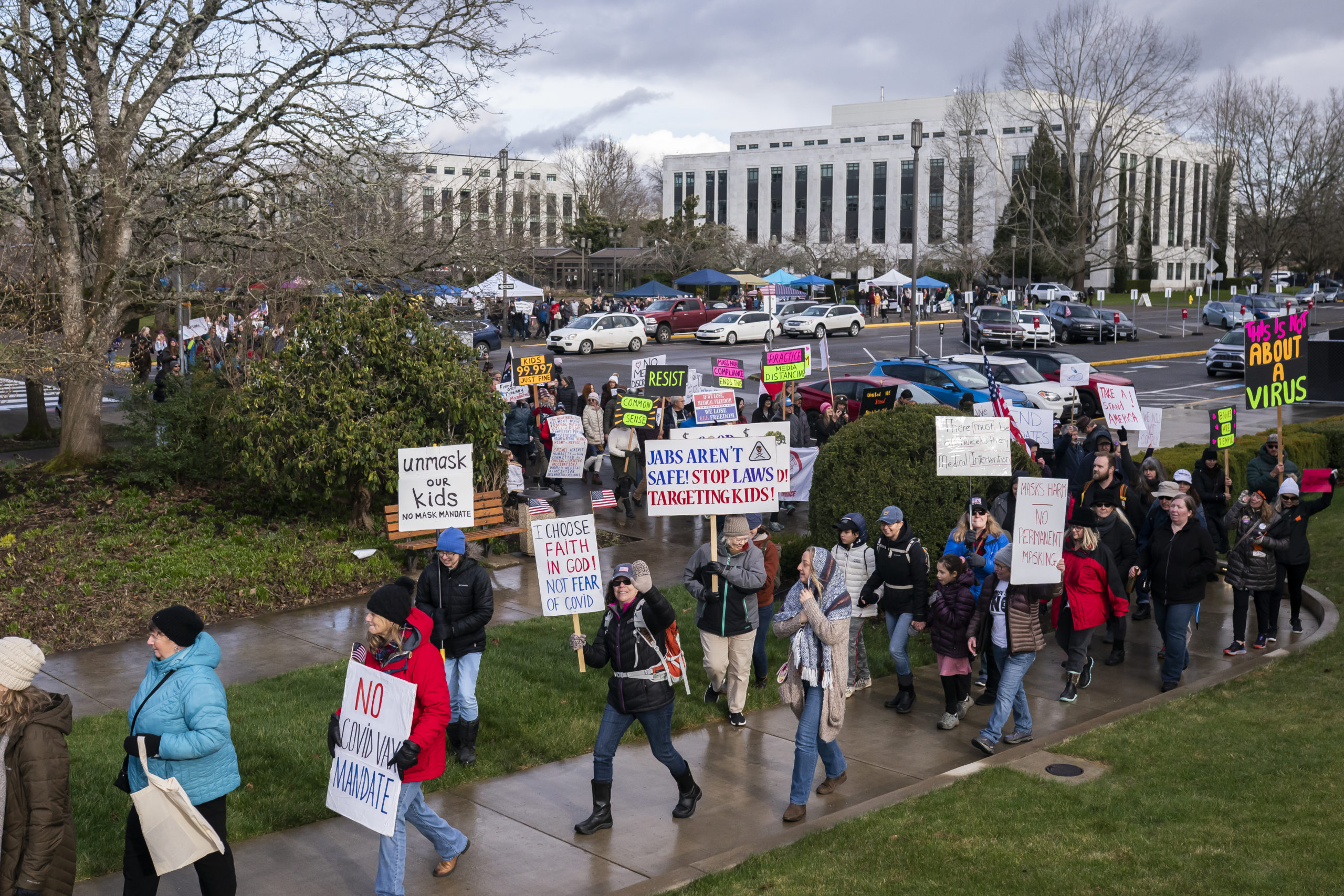 Attendees march during a rally against vaccine and mask mandates at the state capitol on February 1, 2022 in Salem, Oregon. After listening to speakers outside the building, the crowd was successful in getting state troopers to let some maskless members into the statehouse. (Photo by Nathan Howard/Getty Images)

In October 2021, Shultz told his football team it was possibly his last game coaching them due to the vaccine requirement, KTVZ News reported. Ahead of the deadline in October 2021, 96% of the Bend-La Pine school district had been vaccinated.

“I’m at peace about it, and I’m thankful that there’s finally some finality, after all this time,” Lundy told KTVZ News.

In September, New York City fired 800 teachers who were unvaccinated. The NYC Department of Education has fired nearly 2,000 unvaccinated teachers in total.

Bend-La Pine School Board and Cook did not immediately respond to the Daily Caller News Foundation’s request for comment.