The Monday oral arguments before the Supreme Court regarding lawsuits against Harvard University and the University of North Carolina’s use of affirmative action in their admissions process showed the court is leaning toward ruling against affirmative action, experts told the Daily Caller News Foundation.

In the two cases, Students for Fair Admissions v. University of North Carolina (UNC) and Students for Fair Admissions v. President and Fellows of Harvard, the court weighed if the universities are unconstitutionally using race-based admissions to discriminate. The Monday hearings lasted five hours as the justices questioned attorneys over the benefit of the universities’ use of the race-based policies, which experts told the DCNF shows the court is ready to rule against affirmative action.

Carrie Severino, president of JCN a group focused the Constitution and equal justice under law, told the DCNF that racial preference has been lingering in education for decades since a 1978 Supreme Court decision in Regents of the University of California v. Bakke that the university’s use of a racial quota system was unconstitutional.

“The use of racial preferences in education has been an unsuccessful experiment for 44 years, going back to the Bakke case,” Severino told the DCNF. “The court’s argument yesterday showed that it is high time to return to the constitutional norm of color blindness.”

The lawsuit against Harvard University alleges that the university puts a specific limit on accepted minority students. UNC allegedly uses race as a determining factor throughout the entire admissions process.

“I’ve heard the word diversity quite a few times, and I don’t have a clue what it means,” Thomas said to Roberts. “It seems to mean everything for everyone.”

Park told Roberts that diversity is just a minimal factor in the school’s admissions process.

“First, we define diversity the way this court has, in its court’s precedents, which means a broadly diverse set of criteria that extends to all different backgrounds and perspectives and not solely limited to race,” Park continued, saying there are “many different diversity factors that are considered as a greater factor in our admissions process than race.”

Supreme Court Justice John Roberts pressed Harvard’s lawyer Seth Waxman on the school’s use of race to determine a student’s admission. Waxman told Roberts that race is a factor in the admissions process just as “being an oboe player in a year in which the Harvard Radcliffe Orchestra needs an oboe player will be the tip.”

“We did not fight a civil war about oboe players,” Roberts replied to Waxman. “We did fight a civil war to eliminate racial discrimination. And that’s why it’s a matter of considerable concern. I think it’s important for you to establish whether or not granting a credit based solely on skin color is based on a stereotype when you say this brings diversity of viewpoint.”

Alex Deise, policy counsel at FreedomWorks, a group focused on personal freedom and the rule of law, told the DCNF that there are most likely several votes against affirmative action, though it is unclear which justices will rule against it.

“Based on the oral arguments yesterday, it is likely that there are five, if not six votes to rule against the discriminatory admissions policies of the University of North Carolina and Harvard,” Deise told the DCNF. “That makes the key question: what position will garner 5 votes? While Chief Justice Roberts, Justice Thomas, and Justice Alito have all previously expressed their strong disagreements with the court’s affirmative action cases, the Trump-appointed justices have not had that opportunity.” 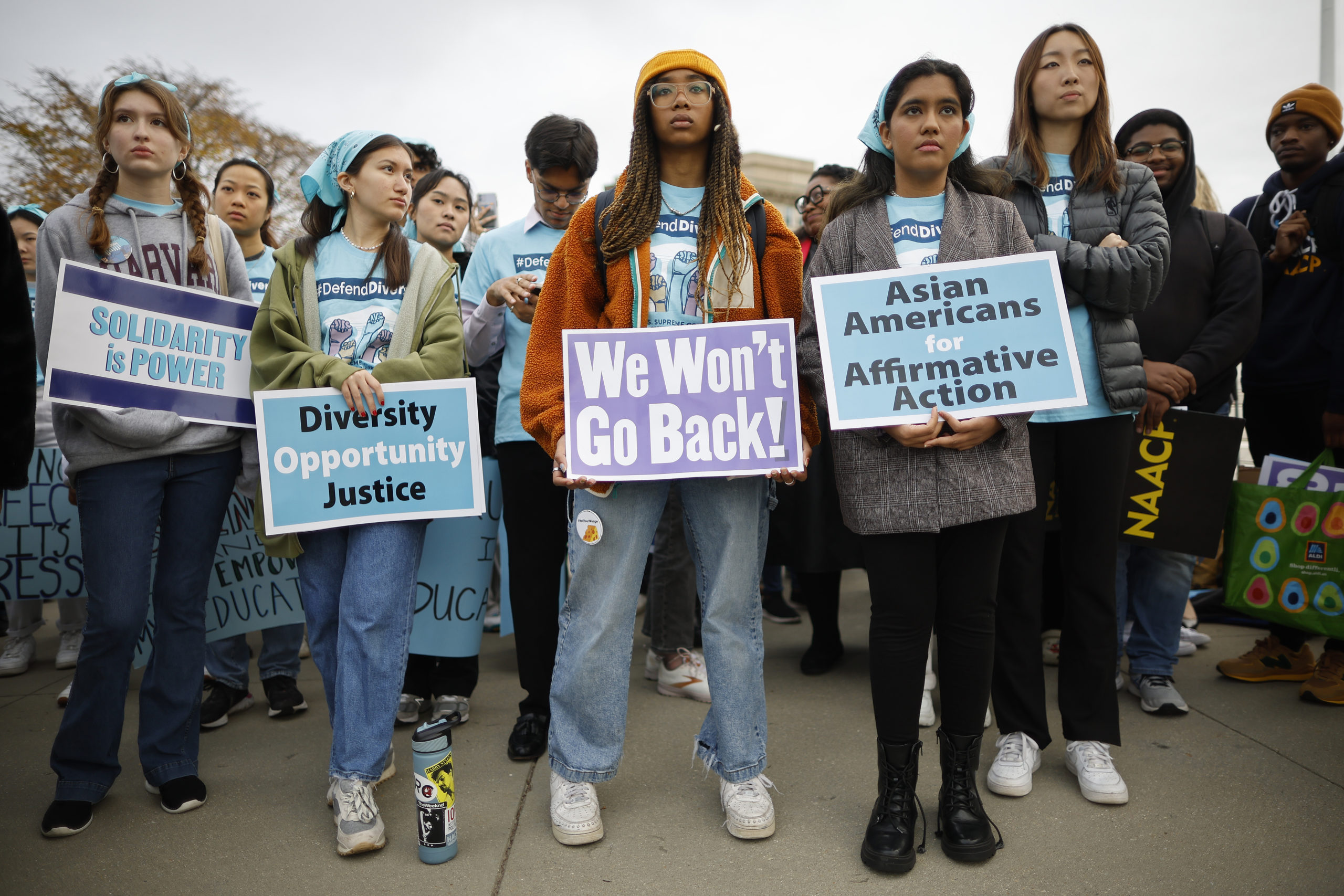 Proponents for affirmative action in higher education rally in front of the U.S. Supreme Court before oral arguments in Students for Fair Admissions v. President and Fellows of Harvard College and Students for Fair Admissions v. University of North Carolina on October 31, 2022 in Washington, DC. The conservative Supreme Court will hear arguments for the two cases concerning the consideration of race as one factor in college admission at the two elite universities, which will have an effect on most institutions of higher education in the United States. (Photo by Chip Somodevilla/Getty Images)

“That would be peculiar, wouldn’t it?” Kagan said.

Supreme Court Justice Samuel Alito challenged affirmative action policies to Park, saying because he has an ancestor who is American Indian then he too could identify as the race to receive racial preference.

In the two cases, the Supreme Court is weighing whether it will overturn Grutter v. Bollinger, a 2004 landmark case which found affirmative action for the purpose of further diversifying campus is constitutional. If overturned, Harvard University and UNC would be prohibited from using race to consider a student’s admissions status.

Nicole Neily, president of Parents Defending Education, a group working for parental input in education, told the DCNF that the hearings show that treating students during the admissions process differently based on the color of their skin is not permissible.

“It is both morally and legally wrong for schools to treat students differently based on the color of their skin,” Neily told the DCNF. “Parents Defending Education is proud to have filed an amicus brief in support of Students for Fair Admissions – because racism has no place in America.”

Harvard University, UNC and American Civil Liberties Union did not immediately respond to the DCNF’s request for comment.