The website BuzzFeed fell for a massive hoax on Monday when it reported that Nevada rancher Cliven Bundy made a series of bizarre allegations against President Obama in a handwritten lawsuit filed in federal court last year.

In an article originally entitled “Cliven Bundy Claims Obama Threatened Donald Trump In Bizarre Hand-Written Lawsuit,” BuzzFeed reported on a preliminary injunction filed on May 16, 2014 by two co-plaintiffs who signed their names as Cliven Bundy and David Rothrock.

The filing makes a series of unbelievable claims against Obama — including that he blackmailed Donald Trump and forced Cliven Bundy to perform oral sex on the first family’s two dogs, Sunny and Bo.

One section of the suit reads:

Barack Obama was not a natural born citizen therefore he has no authority to take over peoples land under imminent domain. Mr. Obama blackmailed and covertly threatened Donald Trump with building code regulation violations, property tax fraud, illegally operating offshore tax havens for betting with Federal indictments unless he shuts up and stops the Birther movement because Mr. Obama fears he will be exposed for his covert and sinister ties to Iran’s Hezbollah network.

As BuzzFeed reports, the suit was dropped because the plaintiffs failed to pay a $350 court filing fee. 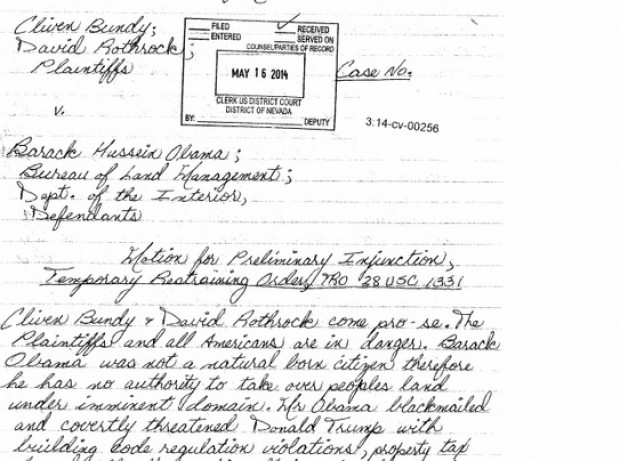 BuzzFeed is currently reporting on Bundy because his son and a group of militia members seized control of a federal building in Oregon in protest of another federal case against a local rancher. Bundy himself gained national attention in April 2014 when his family and their supporters protested an attempt by the Bureau of Land Management to round up hundreds of his cattle because of a dispute over the use of federal land for grazing.

The lawsuit’s filing a month after that standoff should have been a clue as to the veracity of the filing. Other clues lie in a Google search, which BuzzFeed appears not to have conducted. A search shows that a David Rothrock has filed other handwritten lawsuits bearing similar cursive writing in which other outlandish claims are made against national figures.

Last year, at around the same time that the Bundy lawsuit was filed, Rothrock, who is serving a 20-year sentence in Pennsylvania for raping a girl, filed another document on behalf of Minnesota Vikings quarterback Teddy Bridgewater alleging that Jacksonville Jaguars quarterback Blake Bortles uses steroids and is HIV-positive.

Like the Bundy lawsuit, the Bridgewater suit is written in cursive. The handwriting of both suits is similar.

Rothrock also filed a restraining order that same month against two mob bosses, including John Gotti Jr. That filing was also handwritten and in cursive.

Philly Mag called the lawsuit the “strangest court motion we have ever seen.”

BuzzFeed changed the headline of its erroneous article on Monday and attached a correction at the bottom of the piece noting that “the lawsuit was apparently sent by Rothrock with Bundy listed as a plaintiff and has been updated throughout to reflect that.”

BuzzFeed’s editor-in-chief Ben Smith was forced to issue a correction after he tweeted the article. In his first tweet of the piece, Smith tied tohe phony lawsuit to Donald Trump and his presidential campaign supporters.

This handwritten Cliven Bundy lawsuit is an amazing look at the meme underground Trump feeds and feeds on https://t.co/8O6FWq0znj

Correction: The insane Obama lawsuit is in Bundy's name, but no evidence Bundy was actually involved https://t.co/MYH59ngCxY