Meet the only two people in America who could be more obtuse than ex-MSNBC host Ed Schultz.

Last year, Schultz had the nifty idea to take a breach of partnership lawsuit against him to trial even though he had to know the proceedings would implicate his then-boss, MSNBC president Phil Griffin, as a liar and possible perjurer. It did and Schultz was soon out of a job.

Now, the attempt last month by Whitaker and Mathias to buy ICE whistleblower Taylor Johnson’s silence is working out equally well for the Department. After rejecting the offer made at Mathias’s Long Beach, California, office, Taylor was abruptly fired, supposedly for cause. How can DHS now claim Taylor’s termination was necessary if she was offered a $100,000 severance agreement that would have allowed her to leave with a clean record if she would just shut up?

In poignant emails to the Washington Gadfly Taylor, who  testified before Congress last year about being stripped of her gun and badge without explanation after objecting to a special visa program for foreign investors, explained why she refused the “crummy offer” made at Mathias’s Long Beach, California office.

Johnson, who the ICE press secretary has been secretly smearing to reporters, said despite financial pressures she was “not going to take a settlement if it means not correcting a seriously broken system. One that endangers America and more importantly my kids. I’ve always told my kids doing the right thing isn’t always going to be the easiest thing. As a mom and a federal agent, how can I say that and not be willing to back it up.”

“I’ll now have to exhaust every cent in my retirement until I can get in front of the [Merit System Protection Board to argue for reversing the termination]. I just finalized my third adoption so it’s terrifying to think of being without a job. Did anyone in ICE consider the consequences to my kids? I’ll be in the unemployment line for the first time in my entire life?” she continued. “Seems I made a lot of enemies in DC after I testified.”

Meanwhile, more than five weeks after the first inquiry, the DHS Office of Inspector General late Wednesday afternoon finally commented on the attempt by ICE press secretary Gillian Christensen to use confidential information to convince this reporter that Johnson was a problem employee and dishonest.

Erica Paulson, the IG acting Director for Public Affairs, said via email that, “I’m not sure what happened with us missing your December 29 communication. Thanks for reaching out again.”

“While we can’t comment on any specific cases, the allegation that a DHS employee would purport to share confidential information about a colleague inappropriately outside the agency is obviously of concern to the Office of Inspector General. This type of situation is particularly troubling when it involves someone who is a whistleblower who alleges that she has been retaliated against by the agency.”

The December 29 email was sent to both the main IG press email address and Assistant IG Mark Bell. It was also postal mailed to Secretary Jeb Johnson.

Paulson did not respond when asked if she would try to find out from Bell what he did with the email. And somebody at DHS needs to explain what Johnson’s office did with the letter. 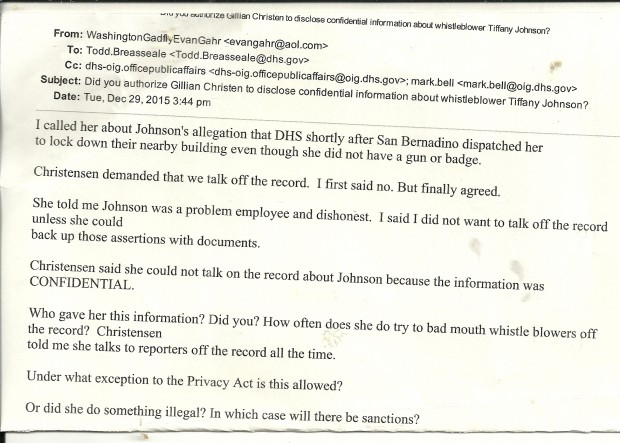 1
CNN's Acosta Interrupts Dr Birx As She Discusses The WHO's Handling Of Coronavirus Pandemic
Politics
2
'I Would Like Them To Shut Up': Dr. Drew Says Media 'Needs To Stop 'Whipping Up Further Panic And Chaos' With Coronavirus Coverage
Entertainment
3
'We Should Never Let Someone Like That Run This Country': Tucker Carlson Says Dr. Fauci's Advice Could Lead To 'National Suicide'
Media
4
Chinese Markets Reopen — And They Still Sell Bats, Dogs And Cats
World
5
USS Roosevelt Sailors Cheer In Support Of Fired Commander As He Exits The Coronavirus-Infected Ship
US