The intimate gathering attracted up to 45 supporters who mingled around a medium sized ballroom at the Crown Plaza Hotel in Nashua.

The event looked similar to a small town watch party for a local auditor or  county board member rather than an internationally known Republican presidential hopeful with millions fundraised.

However, the big elephant in the room was the lonely mic stand, a reminder that Dr. Carson would not be at the party.

“We’re not in Manchester. It just isn’t quite the population center. I don’t think we need to equate the size of people we draw to a party like this, which is by no stretch a victory party,” Carson campaign chairman Bob Dees told The Daily Caller. “We recognize it’s like an Olympic dive. You have a degree of difficulty and you have the manner in which you dive.”

Dees described the difficult political terrain for Carson to climb in New Hampshire as an issue of demographics more than anything else. The campaign views Carson’s immediate departure from the Granite State to South Carolina before results came in as a more strategic move.

“Here, it makes all the sense in the world. I’m here as the campaign chairman to applaud our staff and to help affirm the team, but the reality is we’re moving out and it doesn’t make sense to have Dr. Carson here, so he’s in South Carolina and that makes all the sense in the world—just move to the next thing.” Dees added, “It’s not like he can do anything right now here in New Hampshire.” He can do a lot in South Carolina.” 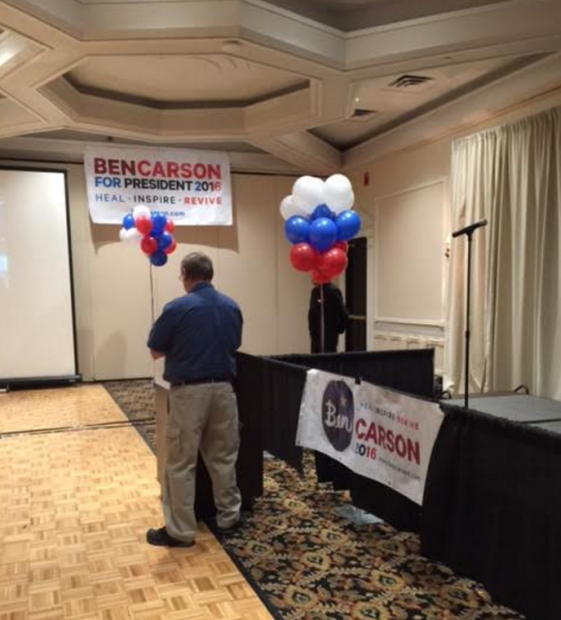 How does the Carson camp view the demographic differences between New Hampshire and South Carolina?

“New Hampshire is a high difficulty dive for a person who is a fiscal conservative and a social conservative like Dr. Ben Carson and one that’s very attractive to evangelicals. The South Carolina demographic actually favors him more so that would warrant a greater amount of effort there than here,” the staffer said, noting Carson learned much from the people of New Hampshire.

Unlike larger presidential campaign watch parties, the Carson camp offered all attendees and the few reporters a full spread of hors-d’oeuvres  and a bartender serving drinks. The table with the silver serving pans filled with bite sized food stood where a bank of television cameras, risers, and reporters would normally set up at other watch party venues.

The dim-lit room, dour as a result of Carson’s prospects in New Hampshire, still contained ardent supporters of the doctor who believe better days are yet to come in South Carolina as well as the Super Tuesday primary states. 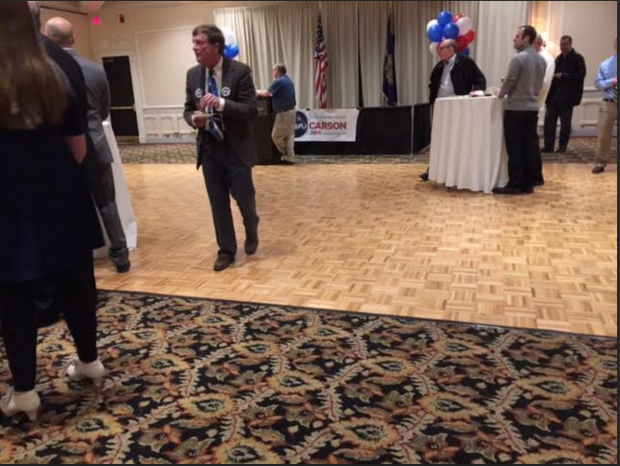 Carson’s New Hampshire supporters feel similarly about him moving on to South Carolina and did not seem angry or upset that he was not at the watch party. Dees noted that most of them already met Carson.

Additionally, Dees disputes reports that Carson skipped his Iowa watch party. According to Dees, Carson actually did attend that gathering early in the evening but needed to leave before the end because of bad weather in the area.

“[The campaign] went very well for having limited funds in the area. He’s going to do great in South Carolina,” Nashua resident Brian Turk said. “The tortoise thing is really going to start working for him as he goes across the country.”

Derry resident Danielle Finnegan told TheDC the campaign was “sad” for her, because she believes Carson was given little opportunity to present himself among bigger candidates.

“I think when you have Trump on the other end of [the spectrum],you have a lot of extremes. So I think that in the general mix, it kind of ties between Bush, Cruz, Rubio. And Carson still is a very strong candidate. I think he presents very well. I don’t think he got all the opportunities to do that.”

Tom Puzzo of Derry felt good about the work he did on the campaign, despite the outcome.

“I think it was pretty good. We had a lot of phone banking. We had a lot of literature dropping—a lot of signage allover the place. We had a very active group of volunteers. Of course, Carson wasn’t in the state as much as other candidates were. But I think that people we spoke to feel very good about it,” he said.

Carson finished second to last among the GOP pool of candidates, beating out Gov. Jim Gilmore, with two percent of the New Hampshire Republican primary vote.