A recent poll found those living in states with higher tax burdens are more likely to say they want to move than residents of states with lower taxes.

According to Gallup, 46 percent of those living in Connecticut and New Jersey – which have some of the highest state and local rates in the nation – wanted to leave, followed by 42 percent in Illinois, 41 percent in Rhode Island and 40 percent in Maryland.

Just 13 percent of Montana residents – which is in the bottom three states in the country for state and local tax rates – wanted to leave, followed by 17 percent in Oregon and 19 percent in Washington state. 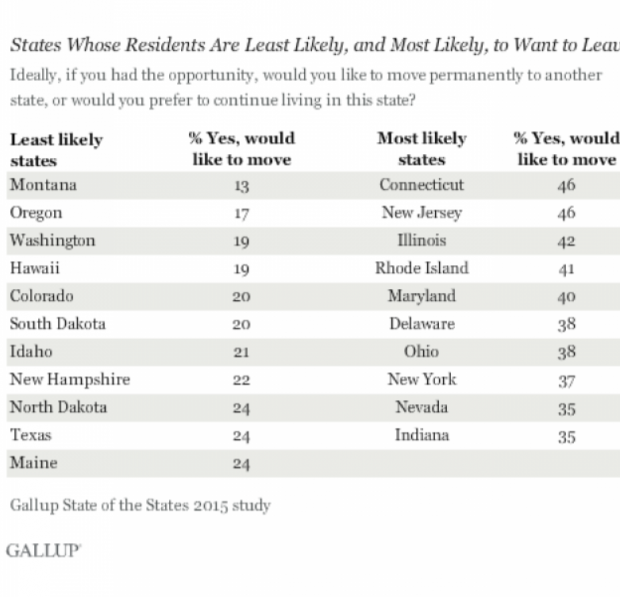 While many residents say they want to leave for the financial perks, few plan on acting on it in the near future, according to the survey.

“Despite having a desire to leave one’s state, few actually report that they intend to move permanently to another state,” the poll reads. “For example, only 12 percent of Connecticut residents who report they would like to move say they plan to do so in the next 12 months.”

The findings said states with growing populations had advantages when it comes to economic growth and larger tax bases, but areas with the highest rates could be in jeopardy of losing out on these gains due to residents migrating to states with lower tax burdens.

“States in the first, second and third quintiles have similar percentages of residents reporting they would like to leave their state; however, this percentage increases for residents living in states composing the fourth and fifth quintiles,” Gallup said. “These data suggest that even moderate reductions in the tax burden in these states could alleviate residents’ desire to leave the state.”

The results were based on telephone interviews with 500 adults across the country from March 30-Dec. 22, 2015 and leaves a margin of error of plus or minus 5 percentage points.