WASHINGTON — At a rally in front of the White House last week, former Virginia Gov. Jim Gilmore said had he won the presidency, his goal would have been to “jack up” the economy and would have had the sophistication needed to navigate the increasingly volatile global atmosphere.

“I only had one goal ever: to win the presidency, to be the president,” Gilmore said of his campaign. “Never had any other goal.”

“My intentions were to grow the economy,” Gilmore told The Daily Caller after an event sponsored by Take Back Our Republican, a group that aims to rally Republican support for less money in politics. “I think that a 2 percent economy is causing many people to be hurt. … We have to have executive leadership to actually grow the economy and right now. The president is satisfied with a 2 percent growth. So, the goal would’ve been to immediately jack up the economy and get to where it belongs.”

“And where at 2 percent you end with people unemployed, afraid and that’s what’s creating part of the anger in the United States today that’s leading to this presidential campaign being so disjointed both with Bernie Sanders on the left and Donald Trump on the right,” he explained. “It’s because of this anger and frustration and fear that people feel, so a president really has to address that first.”

Gilmore went on to explain what he could have done abroad. He suspended his campaign after a last-place finish in the New Hampshire primary.

“Second of all, we have a real international challenge, both from Russia, China, North Korea and also this international gorilla movement. That’s the war we’re in, and you have to have somebody that’s actually sophisticated enough not to put us in harm’s way the way the neocons did but not to be an isolationist either, the way some have advocated. You have to have to someone who is really knowledgeable in this field, and I could’ve done that as president.” 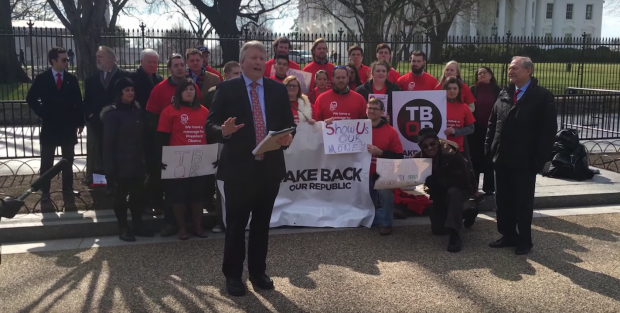 (Photo: YouTube/Take Back Our Republic)

“I think that the race right now is very troubling in terms of both sides the Republicans and the Democrats,” Gilmore said. “The lack of foreign policy knowledge and experience is shocking.”

Speaking of troubling foreign policy experience, TheDC asked Gilmore if he thought Hillary Clinton is eligible to stay in the race.

“No, I took the position in April on the Luke Russert show, and I was the first person to say back in April of this year that she was disqualified from the race,” the former Virginia governor said.

“And the reason is because the next president must find a way to restore the American people’s faith in their own republic and their own ability to govern themselves. She cannot do that. She was secretary of state the whole time the Clinton Foundation was running; I think that she was receiving overseas contributions to the foundation.”