The footage, which was taken Tuesday night at Trump National Golf Club in Jupiter, Fla., is not conclusive but it appears to show Lewandowski grabbing Fields’ arm as she was asking the GOP front-runner a question following a press conference.

The C-SPAN video begins with Trump walking through a crowd with Fields, who is seen wearing glasses and a white jacket, approaching from the right. Lewandowski, who is the shorter man walking behind Trump and to his left, appears to reach out and grab the reporter. The video does not show the aftermath of the contact. 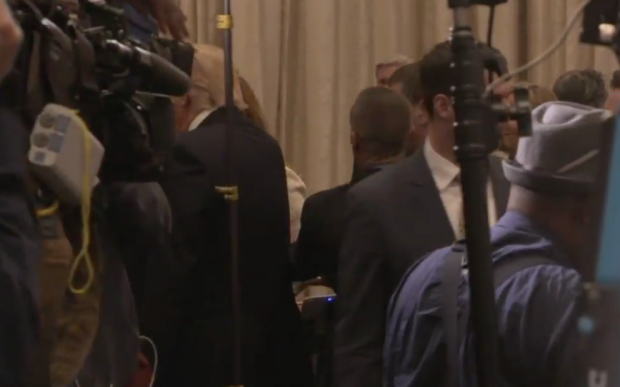 The Trump campaign — as well as Trump himself — has vehemently denied that Lewandowski grabbed Fields’ arm.

“Oh I don’t know how they got there,” Trump told Townhall’s Katie Pavlich after Thursday’s GOP debate in Miami. “You have to check her out, just check her out.”

“I don’t think it ever happened because he was surrounded by Secret Service agents, many of them who were with me and I didn’t see anything happen,” he told other reporters.

Lewandowski has also lashed out at Fields, accusing her on Twitter of fabricating other stories, such as her coverage of the Occupy Wall Street movement when she worked for The Daily Caller.

Fields, who published photos of bruises left on her arm after the grab, filed charges with police in Jupiter early Friday, IJ Review first reported.

While Breitbart has issued statements in support of Fields, one of her colleagues published an article on Friday relying on a different video recorded at the event. The reporter, Joel Pollack, asserted that a Secret Service agent, and not Lewandowski, grabbed Fields’ arm.

The video Pollack loaded to the website does show Fields approaching Trump, but it pans away before the incident in question. Pollack surmises that because Lewandowski was standing to the left of Trump while Fields was walking on his right, the campaign manager would not have been in a position to grab the reporter.

The C-SPAN video does appear to show Lewandowski reaching out for Fields, however.

The Trump campaign did not respond to a request for comment.

For background on the incident read The Daily Caller’s earlier coverage.