More than 20 states considered imposing taxes on vapor products in 2015 and as of Jan 1., four have already implemented them.

A Tax Foundation report released Tuesday maps the entire country and reveals which states have been most eager to hit vapers with excise taxes. 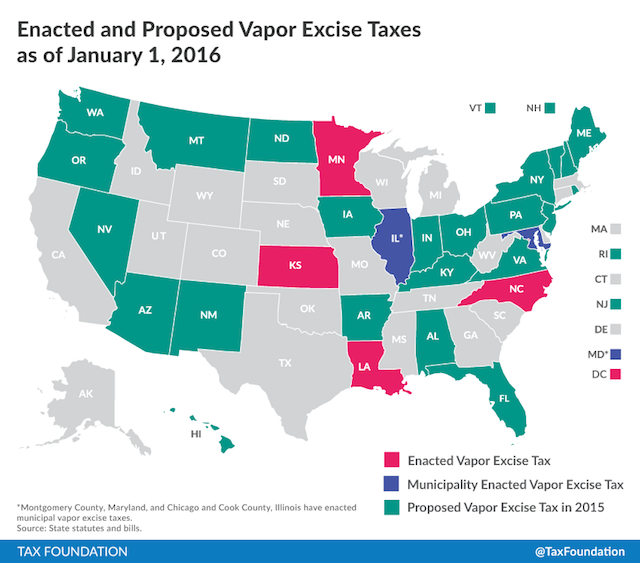 Enacted and Proposed Vapor Excise Taxes as of January 1, 2016

E-cigarettes are a relatively new product, debuting in the U.S. in 2007. As a consequence, there is still huge variation between states in terms of their taxation and regulation; many state legislators are in limbo about how to handle the products.

There is also a furious debate raging between public health professionals as to how effective they are in getting people to quit smoking. One fact, however, is not in doubt – e-cigarettes are vastly safer than combustible tobacco cigarettes. (RELATED: Study Finds E-Cigarettes Raise Chances Of Quitting, ‘Can Save Lives’)

A study by Public Health England, published in 2015, concluded e-cigarettes are 95 percent safer than regular cigarettes. Given e-cigarettes are far safer than tobacco cigarettes and are helping millions of people quit smoking, the Tax Foundation recommends policy-makers resist the temptation to treat vapor products the same as tobacco and refrain from imposing taxes that will disincentives people from switching.

“Policymakers should avoid extending punitive rates from traditional cigarettes to vapor products because it limits the consumer’s ability to use vapor products to quit cigarettes,” said Tax Foundation Economist and Director of State Projects Scott Drenkard. “Our first reaction should not be to impose cigarette taxes on what is fundamentally a different product.”

Minnesota decided to tax products as a percentage of its sale price, with the tax being levied at the point of wholesale – this is known as an ad valorem tax. “Whether intentionally or not, using ad valorem taxes on vapor products results in disparate tax treatment of these products,” said the Tax Foundation.

This is because there are many different types of e-cigarettes. Some are single use while others can be recharged or refilled with e-liquid. “An ad valorem tax hits disposable e-cigarettes harder than a specific tax, since disposables include the value of the plastic device itself, not just the fluid, in its sale price.”