Democrat-voting states have been slow to cut carbon dioxide (CO2) emissions compared to states that vote Republican, according to an analysis of federal emissions data by The Daily Caller News Foundation.

The amount of U.S. CO2 emissions per dollar of economic output has declined 28 percent since 1990, according to data from the Energy Information Administration (EIA). The decline hasn’t been evenly distributed throughout the country, and traditionally Republican states have been the quickest to reduce emissions.

Red state economies, which The DCNF defined as mostly voted Republican during the past six presidential elections, saw larger drops in the carbon dioxide (CO2) emissions than blue state economies. Those states made up seven of the top 10 states ranked by how much they reduced CO2 emissions, The DCNF found. Of the 20 states which beat the national average in terms of CO2 cuts, 13 were red states. 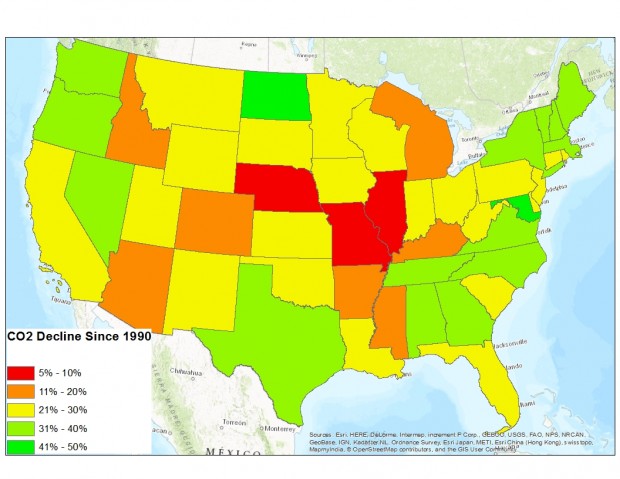 North Dakota’s economy cut its CO2 emissions by nearly 45 percent since 1990, despite an oil boom. The state voted for the Republican Presidential candidate in every election during the study period.

Illinois, which voted for the Democratic presidential candidate in every election during the study period, saw the smallest CO2 decline per unit of economic output, falling by less than 10 percent since 1990. The average Illinois household still uses 44 percent more energy than the average American household, according to the EIA’s Residential Energy Consumption Survey. The state is also very dependent upon coal power because Illinois “missed” the natural gas boom and hasn’t transitioned its energy sector towards natural gas.

Michigan, which voted for the Democratic Presidential candidate in every election is another example of a deep blue state failing to go green. The state’s emissions fell by a mere 15 percent since 1990 because the state’s economy is still 50 percent coal powered. Instead of transitioning towards natural gas, the state invested heavily in the wind power industry which hasn’t replaced coal as quickly.

New York and Maryland were the only large states which always voted for the Democratic Presidential candidate during the study period to have large CO2 declines. However, both states, and other New England Blue states, rapidly transitioned to natural gas power.

The only red state economy to buck the trend was comparatively small Nebraska, which voted for the Republican Presidential candidate during every election in the study period. Nebraska obtains roughly 60 percent of its electricity from coal according to its EIA state profile. Missouri, which was the only other state to fall into the lowest category of CO2 emissions decline, is a battleground state with a history of voting for both parties by narrow margins.