Gasoline prices have risen to a national average of $2.04 a gallon, according to a report published recently by the American Automobile Association.

The average price of gas still varies immensely by state. New Jersey had the nation’s cheapest gasoline, at only $1.84 per gallon. Other states such as Missouri, Alabama, Oklahoma, South Carolina, Mississippi, Louisiana, Arkansas and Texas all had gas prices under $1.90 a gallon.

America’s most expensive gasoline was in California, which pays an incredibly high $2.78 per gallon. States like Hawaii, Nevada, Alaska, Washington, Oregon, Pennsylvania, New York and Connecticut, as well as the District of Columbia, all had gas prices over $2.10 per gallon. 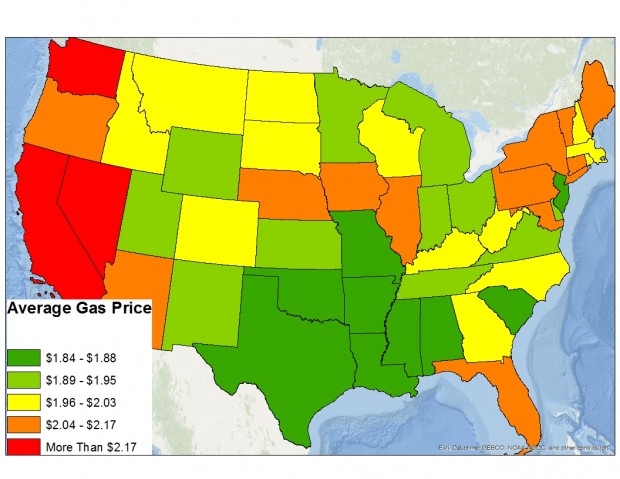 Generally, states closest to oil refineries tend to have cheaper gasoline prices, but the average gas price is near historic lows. Just last year in 2015, consumers paid an annual average gasoline price of $2.40 per gallon.

The average American gas price dropped below $2 a gallon in January and is 39 cents per gallon less than it was at the same time last year. Energy prices dropped 41 percent over the course of 2015 due to hydraulic fracturing, or fracking. Other commodities fell in price as well, but not nearly as much as energy, according to the Energy Information Administration (EIA).

Experts generally agree that today’s relatively cheap gas prices are due to inexpensive oil and cheap natural gas-fired electricity provided by hydraulic fracturing, fracking, and horizontal drilling. Federal government energy experts predict that the national average gas price will remain below $2.00 a gallon for the year — the lowest projection since 2004. Just last year, consumers paid an annual average gasoline price of $2.40 per gallon.

“For the first time since 2004, U.S. drivers are expected to pay an average of less than $2 a gallon for regular grade gasoline this year,” Adam Sieminski, the administrator of the EIA, said a statement in February. “Lower crude oil prices, which have fallen more than 70 [percent] since the summer of 2014, are the main driver of cheaper gasoline prices … [c]ontinuing increases in global oil inventories are expected to keep oil prices under $40 a barrel through August.”

U.S. consumers spent $370 billion on gasoline in 2014, meaning a 28 percent price drop in gas is equivalent to $102 billion in savings for American motorists. The average American household likely saved $700 to $750 at the pump in 2015 according to analysis by the EIA.

[dcquiz] Most analysts agree today’s’ relatively low gas prices are also enormously beneficial to American households, which tend to use cash not spent on gasoline to save more or pay down debt or on goods, such as eating out at restaurants.

Cheap gasoline, however, disproportionately helps poorer families and other lower-income groups. The poor tend to spend a higher proportion of their incomes on “basic needs” like gasoline, so any increase in prices hits them the hardest.

When the price of gasoline increases, the cost of producing goods and services that use gasoline as a component increases as well. Any good which is transported to market via truck or car rises in price, meaning that rising gas prices effectively increase the price of almost everything.