“How many more times does @SpeakerRyan have to say he will not run in 2016 before the media believes him?”

“And in other Trump news, he told me he won’t be attending the annual WH Corr. dinner. Blames media.” — Bob Cusack, editor-in-chief, The Hill.

Uh oh. Watch out. Montel is on the case…

“Kindly dm me the twitter of any dem who has voted for these bills and I will gladly put them on blast. …If someone can find me dem elected officials voting for these anti LGBT laws I will take them on with a fury.” — Montel Williams, washed up Twitter-obsessed talk show host.

Can anyone help this woman with a Wikipedia fuckup?

“Anyone here a Wikipedia editor and want to help me fix an error? (It’s actually in my favor but…accuracy in all things.)” — Irin Carman, MSNBC reporter.

“The fuck is this: MSNBC TO HOLD DOUBLE-HEADER REPUBLICAN TOWN HALLS IN NEW YORK ON THURSDAY NIGHT. This is ridiculous. MSNBC going to hold a town hall with my fist next.” — Igor Bobic.

“You should always end an interview in a civilised fashion, however uncivilised the debate gets.” — Morgan.

“Ratings for The View haven’t been so great lately and if MK filled that time slot, she could have the dream show she always mentions.” — Teen journo CJ Pearson.

“So folks I am flat broke blacklisted, have a criminal record – great time to launch a new labor news coop @PaydayReport…I am a 30 year old Jewish man living in the South – the dating scene in DC was a lot better!” — ex-Politico labor reporter and Washington Free Beacon‘s 2015 “Man of the Year” Mike Elk. 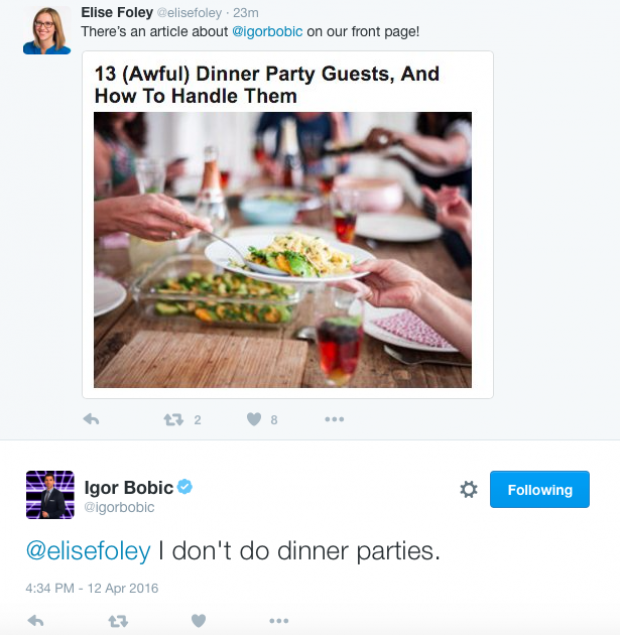