The Daily Caller News Foundation is attending the 17th annual White Privilege Conference in Philadelphia, held April 15-17. The following is part of a series of articles concerning events at the conference.

A lecturer at the 2016 White Privilege Conference (WPC) made the bold claim that almost every dysfunction in society, from racism and sexism to global warming and a weak economy, is united by the ideology of “Christian hegemony.”

Activist and author Paul Kivel may share his name with a great Christian saint and evangelist, but that’s about it. According to Kivel, just about everything bad in the world can be traced to the core ideas of Christianity, which “colonize our mind.”

“In the United States, there’s seven to ten thousand predominantly white, Christian men, who run the major institutions in our society: The corporations, the political parties, the think tanks, the foundations, universities, [and] cultural institutions,” said Kivel. (RELATED: Professional Educator: Grades, Showing Up On Time Are A Form Of White Supremacy)

Kivel made his case that the United States exists as a “Christian hegemony” by asking attendees to consider a variety of ways Christianity quietly influenced their daily lives, such as by making Sunday exist as the normative “day of rest” and by motivating non-profits ranging from the YMCA to drug rehab programs.

From there, he lateraled to explaining how Christianity provides the ideological underpinning of just about everything toxic in society, aided by a series of clearly homemade posters. On one poster, he showed “Christian hegemony” at the center of a web that included ideas like “racism,” “sexism,” and “ableism.” 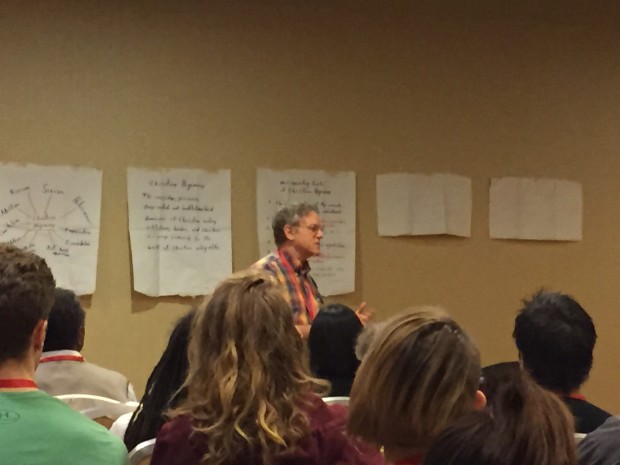 Kivel said three problems are particularly severe in the modern world, and all of them are caused or made worse by Christianity. First, he pointed towards wars in the Middle East, which he says are a byproduct of a missionary drive to spread Western ideas and influence in non-Western lands.

Second, he declares Christianity is to blame for a weak economy, as it provides the God-like “invisible hand” that supposedly drives market forces within a flawed capitalist system. (RELATED: White Privilege Conference Opens By Raising Money For Mother Of Guy Who Shot Cop)

Third, Kivel associated Christian hegemony with global warming, because under Christianity, mankind has dominion over the Earth, rather than requiring that humans treat the Earth itself as “sacred.”

Kivel also provided a set of Christian ideological beliefs that explained why Christianity could be linked to so much evil. For instance, he said Christian dualism made it too easy to condemn various things as bad and worthy of destruction.

“Think about how often during the day we say things are good or bad,” Kivel said. “It’s a rainy day, so we say it’s bad weather … There’s nothing inherently good or bad about the weather, or about people.” But thanks to Christianity, people keep seeing good and bad in everything and force a “with us or against us” mentality, Kivel complained.

Ironically, one quote featured on WPC’s own website is South African bishop Desmond Tutu’s statement that “If you are neutral in situations of injustice, you have chosen the side of the oppressor.”

Kivel also slammed Christianity for having a “hierarchical” view towards love, placing “God over people, men over women, parents over children, white people over people of color,” inevitably creating systems that justify and even glorify oppression.

While he rejects Christianity, Kivel doesn’t reject all spirituality, as he appears to have an affinity for American Indian beliefs, touting them as more respectful of the Earth’s sacredness. He ended the meeting with his own prayer listing his maxims for a good life.

Kivel even opened his lecture by asking them to remember that the WPC was taking place on stolen American Indian land that rightfully still belongs to them. In this regard, he was actually mistaken. The WPC takes place in downtown Philadelphia, and Philadelphia’s land was not seized from Indians. Instead, William Penn amicably purchased the land from the Lenape because he wanted to have good relations with native tribes.