Legendary Indiana Hoosiers coach Bobby Knight has endorsed GOP front-runner Donald Trump for president. This is a big get. Not only is Knight known for delivering perhaps the greatest motivational speech of all time, as well as throwing a chair onto the floor of the court, but he also happens to be one of the best coaches in sports history. He has 902 career NCAA basketball victories, second behind only Coach K. (And Knight was solidly in first when he retired from coaching almost a decade ago).

But why would Knight endorse Trump? The answer lies Knight’s bestselling book, in which he reveals the secret to his success. His coaching philosophy is called “The Power of Negative Thinking: An Unconventional Approach to Achieving Positive Results.” 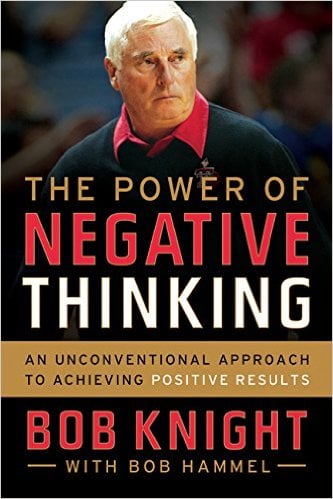 Many politicians pretend that everything is sunny and great. They’ll say that all it takes is a President [crscore]Marco Rubio[/crscore] to solve this country’s problems. Well, as Bobby Knight’s grandmother told him: “If wishes were horses, beggars would ride.” You can’t just pretend things are going to go right because you’d like them to. You need to plan for the worst and make drastic change to prevent it. This is the theory behind Donald Trump.

Very often managerial philosophy books like this one rely on tropes and truisms. Not Knight’s. He tells it like it is. The world would be a little better if more people learned about the “Power of Negative Thinking” instead of pretending that the “Power of Positive Thinking” or “The Secret” will make all your dreams come true.

In his book, The General planted the seeds that flourished in the Trump movement. This is a good read for those interested in predicting the nature of President Donald J. Trump and his administration.

WATCH the greatest motivational speech of all time: