Immigration and Customs Enforcement officials have complained about limited resources but as their budget increased between 2012 and 2015, deportations in fact fell.

“In light of the limited resources available to the Department (‘DHS’) to remove aliens unlawfully present in the United States, it would be legally permissible for the Department to implement a policy prioritizing the removal of certain categories of aliens over others,” a Department of Justice attorney wrote in a 2014 memo defending ICE prioritizing deportation of certain aliens.

The memo continues onto say, “DHS has explained that although there are approximately 11.3 million undocumented aliens in the country, it has the resources to remove fewer than 400,000 such aliens each year.”

Despite the complaints about ICE funding, the department’s budget for detention and removal operations has grown about 25 percent from FY 2012 to FY 2015, $2.75 billion to $3.43 billion. In FY 2012, ICE deported 410,000 illegal immigrants, in FY 2015 they deported 235,000. Specifically, 62 percent fewer illegal aliens were deported from the interior of the United States. 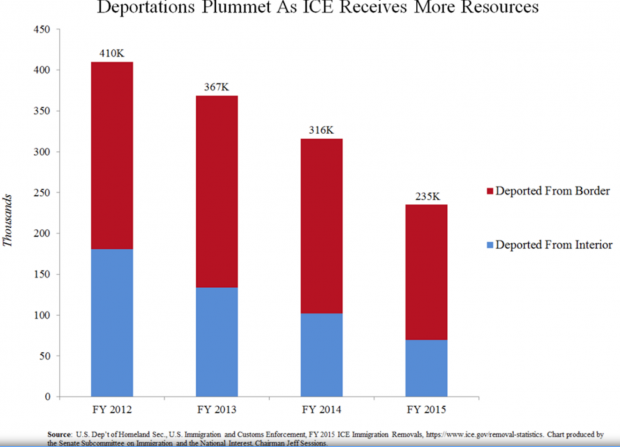