In a vicious rant, Loesch went after McEnany for everything from her small breasts (at least compared to hers) to her overdrawn lips, bleach blonde hair and lip gloss. And, of course, her political beliefs. 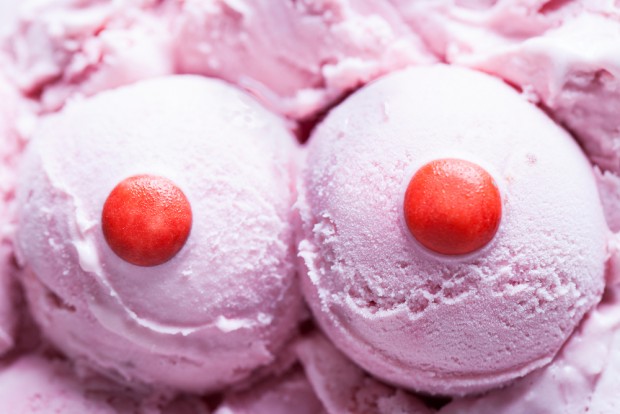 On Tuesday, more was revealed.

For one thing, McEnany wasn’t always so hot for Trump. As reported by WaPo, she and some other Trumpettes weren’t always diehards for The Donald and have used their support for him to beef up their political punditry careers. For another, McEnany learned in her early twenties that she is BRCA 1 positive, the gene mutation for breast cancer. She had implants put in and is planning to follow through with a double mastectomy. She also plans to have her ovaries removed to ward off other cancers.

So Loesch’s whole argument fell flat (so to speak), although she didn’t agree.

She, too, has had family members with cancer.

Seems to me that a female journalist ridiculing another about her flat chest would be somewhere in the lede if not the second graph of a story. You’d think publications like TheBlaze, RedState, Townhall and The Right Scoop would prominently feature that juicy detail. For a moment let’s switch genders: If a male journo publicly suggested that a foe wasn’t as well hung, wouldn’t news sites put it high up?

But in almost all cases they skipped it.

Loesch works at TheBlaze, so maybe they didn’t want to go anywhere near her breasts or her insults about them. They didn’t mention the “flat-chested” remark until 10 graphs into the story.

“My intention wasn’t to ‘bury it,'” TheBlaze‘ Tré Goins-Phillips told The Mirror. “I thought it was important to include, since it’s what Loesch said. But I didn’t feel it was integral to the story. I largely followed the chronology of Loesch’s rant: from professional critique to personal comments.”

Howe admitted in his brief RedState piece that Loesch is a “good friend.”

Asked why he didn’t mention the boob attack in his post, Howe told The Mirror, “Yo. Well firstly I didn’t only not mention that point, I didn’t discuss any particulars of what she said other than to note it was a curb stomping. That said I have VERY little sympathy for the hurt feelings of anyone that elevates the king of personal attacks and calls any apology ‘political correctness.’ Which I believe was precisely why Dana ‘went there.’ As Dana said, don’t start nothin’ won’t be nothin.’ Wouldn’t want to be ‘politically correct.’ Also, I like air quotes.”

The Right Scoop had no reason to avoid the boob attack other than he fiercely defended Loesch lashing out at McEnany for questioning Howe’s conservative badge.

Townhall’s Katie Pavlich also took Loesch’s side, writing, “Warning: Loesch doesn’t hold back, nor should she.”

Actively taking Loesch’s side is somewhat of a given for a lot of these publications.

But avoiding coverage of boob trash talk should not be tolerated.