A controversy has erupted at Dartmouth College after a pro-police display was torn down by Black Lives Matter activists, who denounced it for memorializing the “perpetrators” of “state violence.”

In honor of National Police Week (which falls May 15-21), Dartmouth’s College Republicans reserved a bulletin board at the Collis Center and used it to create a display honoring police officers and firemen who have fallen in the line of duty. One part of the display noted that 60 police and 343 firemen were killed in the 9/11 attacks, while another declared over 20,000 police officers have been killed while on-duty in the history of the United States.

At the bottom, the display said in big letters, “BLUE LIVES MATTER.”

This last part of the display appears to have outraged Black Lives Matter supporters at Dartmouth, several of whom vocally complained on Twitter and Facebook that the display was offensive and even “white supremacist.”

#fight4facultyofcolor and students of color because we all woke up to this white supremacist bullshit in Collis. pic.twitter.com/l1gtxNCzqq

But Black Lives Matter did more than just complain, they also took action. The original display was torn down Friday morning, at about 11 a.m, and in its place almost three dozen sheets of paper were used to cover the bulletin board, all of them carrying an identical message: “YOU CANNOT CO-OPT THE MOVEMENT AGAINST STATE VIOLENCE TO MEMORIALIZE THE PERPETRATORS.” At the bottom, each sheet also had the hashtag “#blacklivesmatter” printed on it. 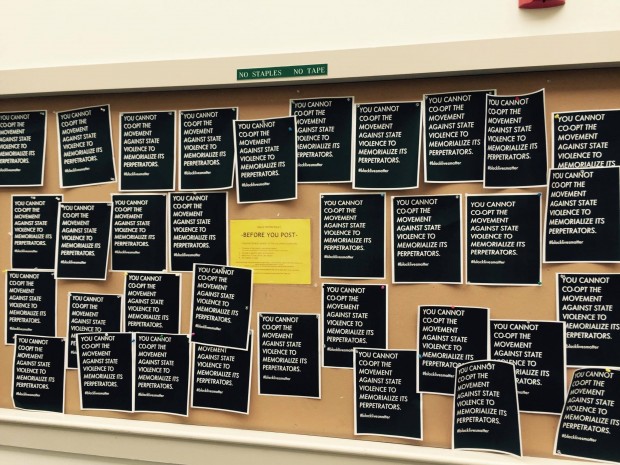 The Dartmouth pro-police display, after it was torn down and replaced with Black Lives Matter material. (Courtesy of Dartmouth student)

The Black Lives Matter activists declared that the original display had been “censored on behalf of the students,” according to an eyewitness who spoke with The Daily Caller News Foundation.

“As an organization, we took the time and effort to obtain proper approval for the display while putting significant thought into its content,” the statement says. “We are dismayed that a group of students would attempt to censor our message while coopting the space for their own purposes.”

“It was taken down by students and replaced because it actively co-opted a movement that is supposed to comment on police brutality against black individuals in this country,” she said. “It took that and by framing that as ‘Blue Lives Matter,’ it normalizes and naturalizes violence against people of color in this country. And that is not okay.”

TheDCNF reached out to Williams for further comment but has not yet received a response.

Incidentally, on the same day as the spat at Dartmouth, two police in nearby Manchester were shot while on duty.