Art Laffer, a member of Ronald Reagan’s Economic Policy Advisory Board, says that Britain leaving the European Union is another signal that Donald Trump will become president. 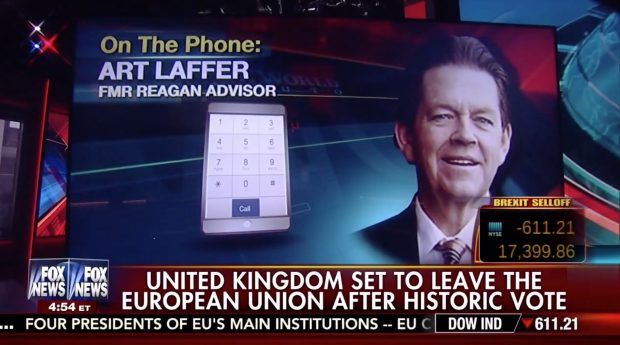 Appearing on Fox News’s “Your World” with guest host Maria Bartiromo on Friday, Laffer said that he thinks America is heading towards Reagan, Margaret Thatcher economics.

“Things are similar to where they were in 1979, 1978, 1980. And frankly, the pressure is in all areas, it’s not just immigration,” Laffer said. “It’s bad economies, it’s all sorts of pressures, regulations, restrictions and with that being the background, I think you’re seeing the first shot fired with Brexit. But you’ll see a lot more coming.”

“I think this will lead to a Donald Trump presidency, ultimately and a lot of prosperity for the world,” Laffer said. “I’m very excited about what’s happening.”

Laffer said, “I expect [Trump] to reach out to the UK totally. I can’t imagine him not wanting to do that. And especially given the way Britain has responded here to Cameron and to Gordon Brown and all the bad economics, bad thought, bad regulations. They’ve just told him enough is enough already.”

“And the U.S. is about to say that to [Barack] Obama and Hillary [Clinton]. That enough’s enough. And what you’re going to see is the new order and it’s very much like Thatcher and Reagan,” Laffer said.