WASHINGTON — “I’d love to, but not right now,” is what Libertarian presidential candidate and former New Mexico Gov. Gary Johnson said when offered a joint by a supporter at a fundraiser Thursday.

Johnson was holding a fundraiser along with with his vice presidential candidate, former Massachusetts Gov. William Weld.

“They were known as the ‘Know-Nothing Party,’ but they sound a lot like the Trump party,” Weld said to cheers, while giving a history of the split of the Whig Party, something he thinks will happen to the Republican Party.

“I think they see a higher ceiling there,” Andy Craig, event coordinator for the Johnson campaign told The Daily Caller.

“Thanks to the liberal and free spirit of Gov. Johnson we seem to be growing equally if not more from the ‘D’ side of the ledger,” Weld said during a speech to supporters, echoing Craig’s sentiment.

As the party was for the Libertarian presidential ticket, the alcohol was presumably self-served. Underage drinker Michael Morris, 20 years old, took advantage of this and said “you can report that” to The Daily Caller.

The event also followed a libertarian tradition by being heavily attended by men. 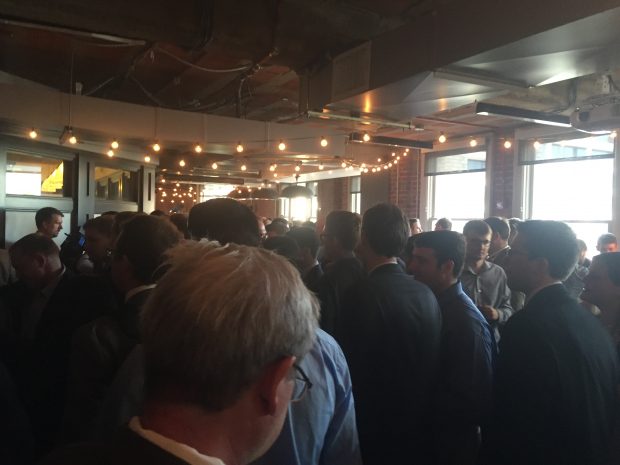 Dudes at the Johnson fundraiser (photo by TheDC)

One female libertarian at the event told TheDC, “I mean they are more libertarian men than women obviously, but we have a good ratio here compared to some other events.” She added, “Also we’ve been seeing a trend in the past couple of years of there being more female libertarians so the ratio has been improving.”

Besides the overwhelmingly male presence, it was also clear that there weren’t many black folk at the event — fewer than five. “Libertarians haven’t done a good job of marketing themselves to black people,” Martin Moulton, black Libertarian candidate for Washington, D.C’s non-voting congressional seat told TheDC.

Johnson touched on the recent publicized shooting of black males by police officers by telling TheDC, “The presidential issue for me is understanding what the common threads are to the least amount of police shootings in a major metropolitan area as opposed to the worst.”

Johnson added, “You do control the Department of Justice as an oversight and I think you can make a difference.” 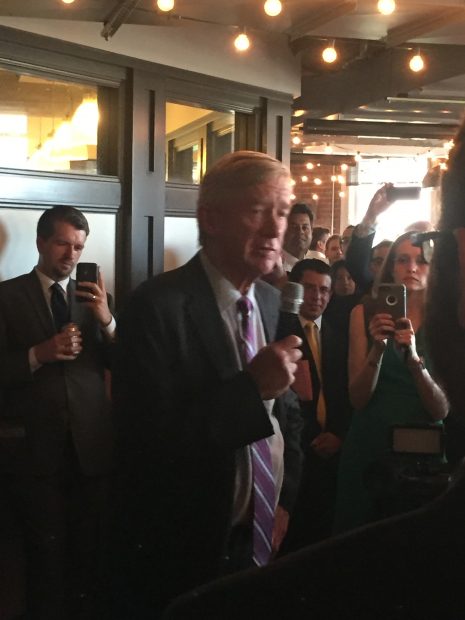 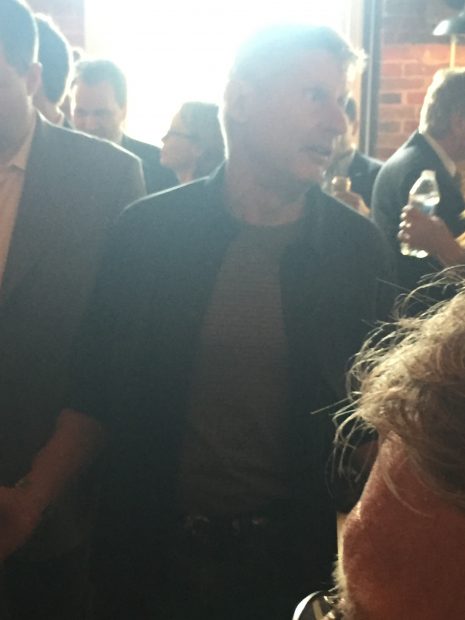 “The fundraising which I raised my hand for has been going very well,” Weld said during his speech. When later approached by TheDC to answer questions, Weld wasn’t too enthused, saying he had to leave to go fundraise, which was just above the press in importance.

Updated at 12:55 PM to clarify title of J.V LaBeaume and to add statement from LaBeaume

“There’s nothing to see here, folks. An activist was trying to promote his marijuana business by offering a ‘sample’ of his product to Gary Johnson. It’s not clear if he was even a supporter. He was not directly invited to the event, certainly not to promote his business to Johnson Weld supporters. Gov. Johnson politely declined when the activist approached him, and directed him to me, as a campaign aide, to further politely dismiss. To end the conversation, and get back to running the event, I accepted the ‘sample.'”

Update 2 at 1:17 PM with email from LaBeaume