An editor at the progressive website ThinkProgress responded to the Baton Rouge cop massacre Sunday by saying black people were “taking justice into their own hands.”

Zack Ford works as ThinkProgress’ LGBT editor, but chose to wade into criminal justice Sunday very shortly after news of the shooting broke.

“Given how police haven’t been held accountable for murdering black people, it’s no surprise some are taking justice into their own hands,” he said. The tweet was later deleted (for being ‘perceived’ as condoning violence), but many people nabbed a screengrab of it. 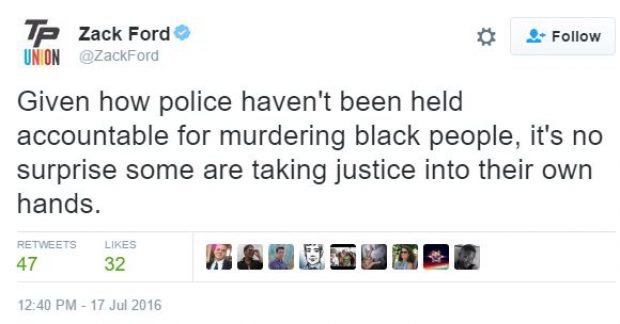 Even before he deleted it, Ford attempted to justify his remarks with a series of follow-up comments explaining that he didn’t really support murdering cops, but that extralegal assassinations

A lot of people think I support murder now. It’s an easy way to avoid acknowledging the systemic injustices that perpetuate these murders.

I want all the carnage to end, but that means actually figuring out why it’s happening. Letting cops get away with murder isn’t that answer.

If anyone wants me to see a substantive reply, you’d best wait a while. Thousands of people are busy claiming I support cop killing.

Thus far, ThinkProgress has apparently made no official response to the spat. That’s a different approach from Vox.com, which suspended editor Emmett Rensin for a week in June after he made posts that encouraged people to start anti-Trump riots.