“I’ve been rushed in here to be the celebrity plagiarism consultant for CNN.”

“I was a bit bored with day 1 of the GOP convention but this plagiarism thing really saved it for me.” — Ben Dreyfuss, social engagement editor, Mother Jones.

And the Trump campaign will not apologize…

“That statement is exact midpoint between “we’ve got to fall on our swords here” and “never apologize for anything”” — BuzzFeed‘s Ben Smith.

Reporter’s ‘dream’ of appearing on ‘Face the Nation’ materializes

“If you had told me as a young kid that I’d one day get to be on “Face the Nation” alongside Bob Schieffer and Peggy Noonan — with John Dickerson moderating — and that we’d hold the conversation on the floor of a national political convention, admittedly I would have said, “Yes, that would be nice.” Never did I think it would happen. And yet sometimes dreams do come true.” — WaPo‘s Ed O’Keefe.

BEFORE THE PLAGIARISM EMERGED…

“Nice job. And it’s nice that a wife loves and supports her husband. I’m for that. No matter what number the wife is. Now, let’s move on.” — Stuart Rothenberg. And later: “The first step to getting out of a hole is to stop digging. Instead, [Paul] Manafort picks up another shovel.”

“Melania was only speech tonight that wasn’t dark. Only one that talked about Trump as a human. Only one with an uplifting message.” —  WSJ‘s Reid Epstein.

“The campaign should take on whoever wrote Melania’s speech.” — Commentary‘s Noah Rothman.

“Melania’s speech was actually humble and endearing — the polar opposite of her husband. She will help him.” — National Review‘s Brendan Bordelon.

“This speech has essentially no real content to it. Nothing personal about Melania. Nothing specific about Trump. Just chicken soup for DJT.” — Reason‘s Peter Suderman.

“She’s probably not allowed to! Probably part of the pre-nup. Trump probably made her sign an NDA too. LMAO.” —  CNN contributor Tara Setmayer, former spokeswoman to Rep. Dana Rohrabacher (R-Calif.).

Bob Dole gets a ridiculous chyron 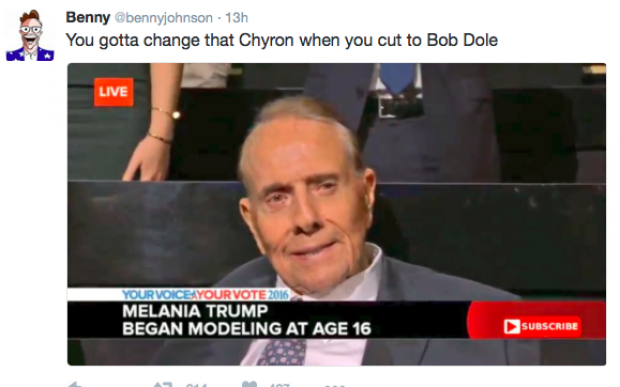