What’s it like to hole up in a special “safe space” during the RNC? Very, very sad, it turns out, unless you really like coloring books.

Case Western Reserve University (CWRU) grabbed headlines, and no small degree of ridicule, when it was revealed the school was maintaining a special “safe space” during the RNC in order to assist those psychologically or physically traumatized by the prospect of Republicans being in Cleveland and giving speeches.

Not willing to let the matter lie, The Daily Caller News Foundation decided to try visiting this safe space directly, since CWRU’s campus lies just a few miles east of the Quicken Loans Arena. A reporter was dispatched to find the safe space (located in the basement of CWRU’s Crawford Hall) and find out what lay inside.

The first attempt, made Wednesday evening, was a complete disaster. It turns out the “safe space” was only operating from 10-4 each day, which hardly seems particularly safe when the most dangerous Republican speeches were being made in the evening.

Unwilling to give up, TheDCNF returned Thursday, and this time met more success. While Crawford Hall required a school ID card to enter, TheDCNF’s reporter was able to gain access by posing as a disaffected law student who didn’t have his card on hand.

Inside, TheDCNF was greeted by a moderately heavyset woman with a face covered in several piercings and a shock of dyed, deep red hair.

This shocktrooper for social justice offered TheDCNF’s reporter coffee (he declined), then led him downstairs into the haven of the safe space.

What lay beyond the veil, in the super-secure safe space of unimpeachable safety? (RELATED: U-Michigan Hosts Safe Space For Students Afraid Of Feminism Debate)

Pretty much nothing, it turns out. 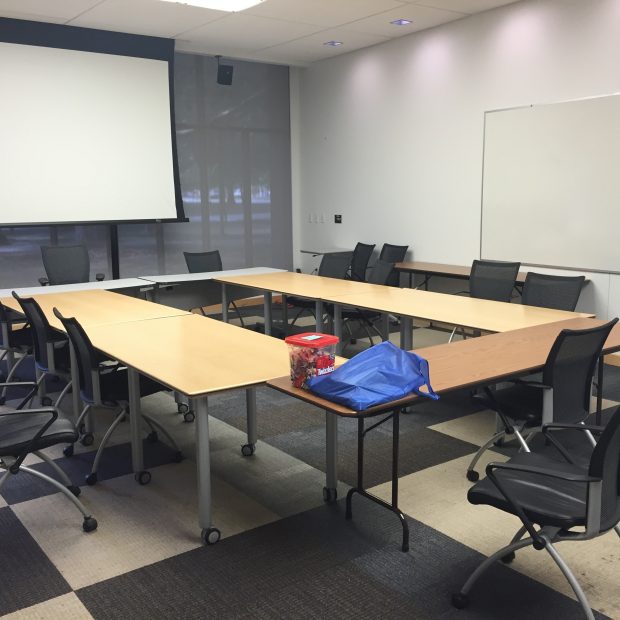 Pretty underwhelming, to say the least. According to TheDCNF’s escort, the reporter was actually the first person to bother showing up for the safe space.

“Do you need somebody to talk to, or just a quiet space?” she asked. Afraid that talking too much would blow his cover, TheDCNF’s reporter said simple quiet space would be enough. With that, the escort went to a side office to perform some clerical work, leaving TheDCNF to its own devices in a very, very safe space.

And what did this safe space/depressing conference room have to offer? Not too much. There was a case of free candy provided by the campus LGBT center, which was nice, although the selection was rather underwhelming for a school that charges more than $45,000 in tuition per year. 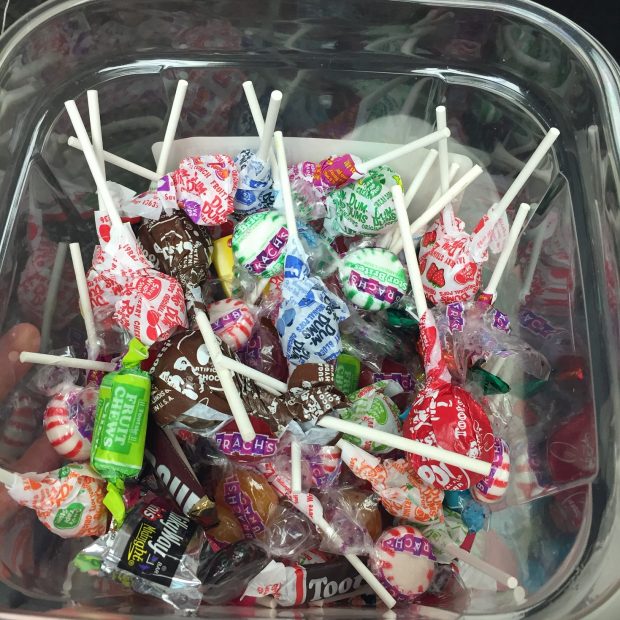 And then there were the coloring books. Three of them, in fact, along with two boxes of markers and a large box of (sharpened!) colored pencils. One of the books was just a generic adult coloring book, but the other two were more interesting.

First, there was “Mer World Problems,” a book attempting to humorously rattle off “first world problems” experience by mermaids under the sea. 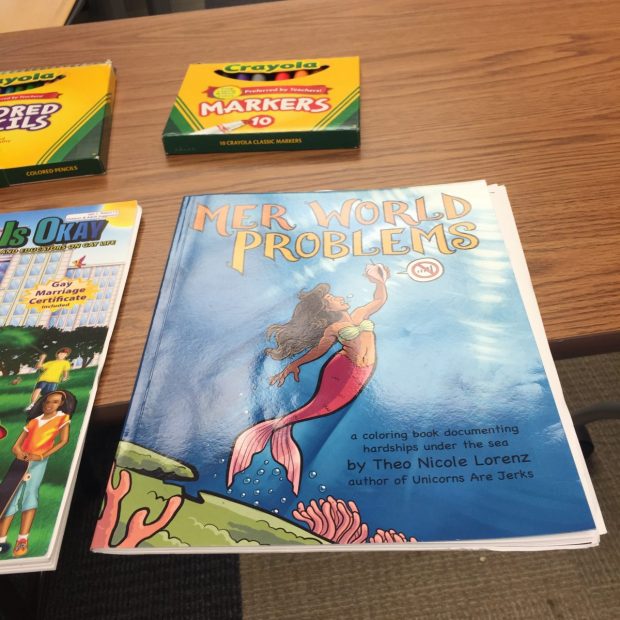 What sort of dumb problems do mermaids have? Tons, apparently: 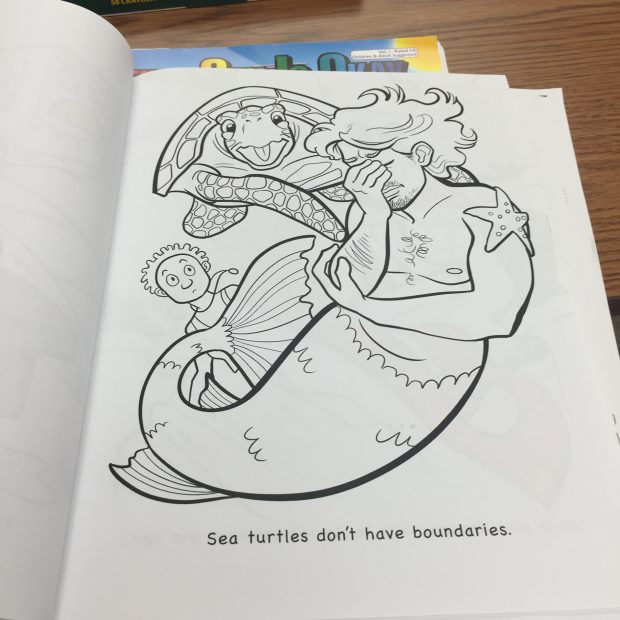 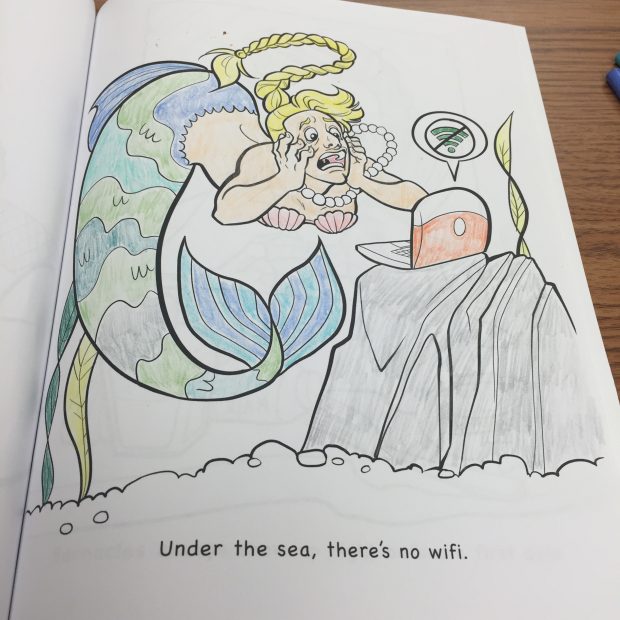 TheDCNF’s reporter colored in this one himself. [Blake Neff/Daily Caller News Foundation] 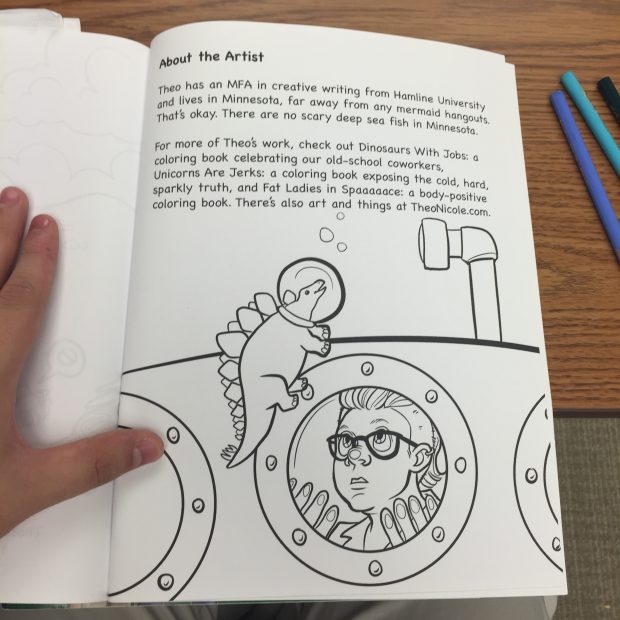 The author of this book also wrote one about fat astronauts. [Blake Neff/Daily Caller News Foundation]

Another coloring book, “Being Gay Is Okay,” is apparently intended to teach children about homosexuality. 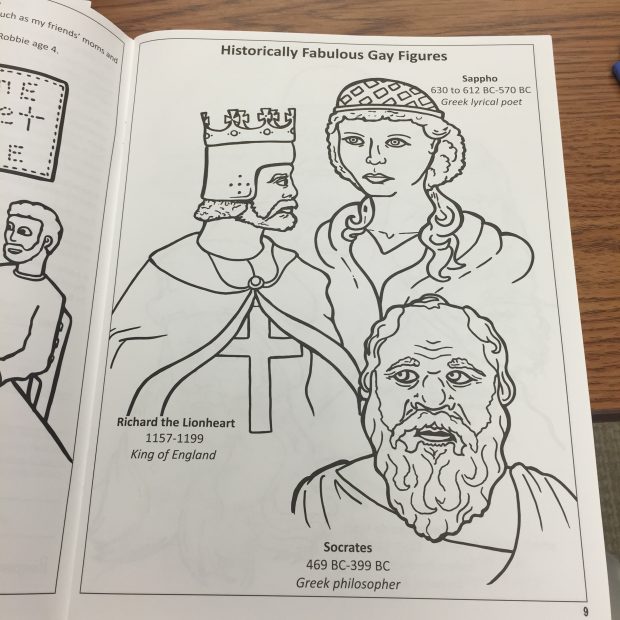 There is very little evidence Richard the Lionheart was gay. Socrates and Sappho aren’t sure things either. [Blake Neff/Daily Caller News Foundation] 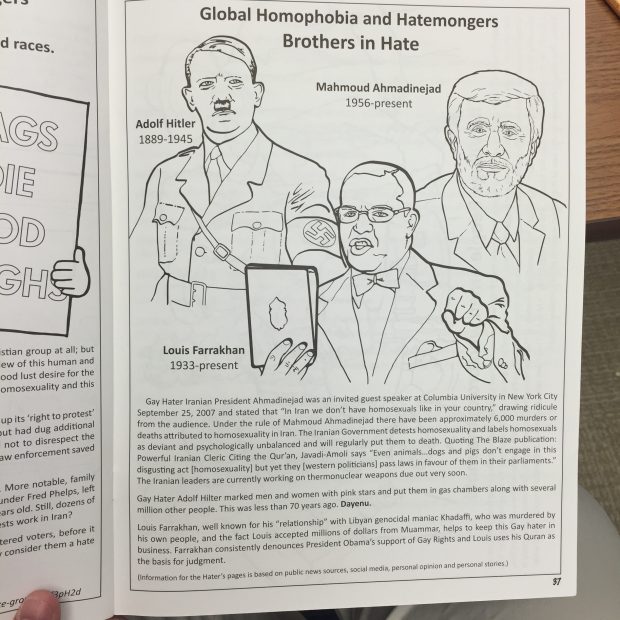 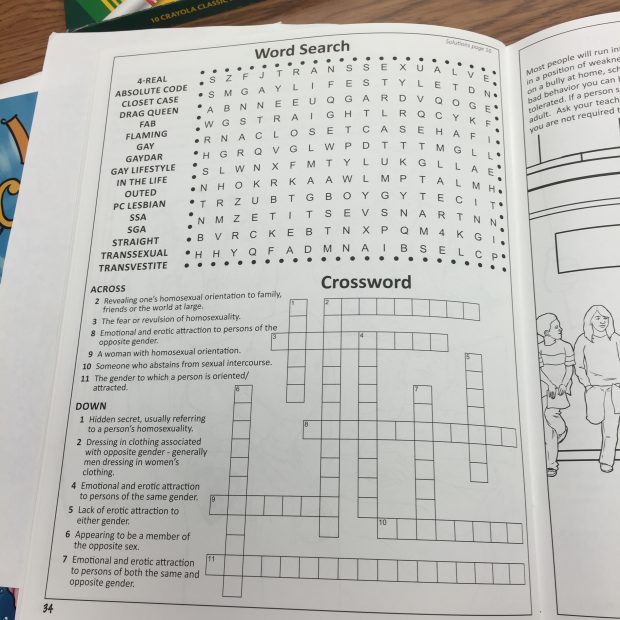 TheDCNF never encountered Donald Trump, or any other Republican, so while the safe space may not have been very exciting, it was at least working properly.
Follow Blake on Twitter