“‘Do we have to censor ‘titties’?’ — every political editor in America right now.”

“Strangest email I’ve gotten today: ‘our Legal department has advised me we are not allowed to pass along story ideas to LWT and John Oliver.'” — BuzzFeed editor-in-chief Ben Smith.

“A guy just followed me for a block to tell me the world is about to end because the sun is gonna blow up. DC is so weird.” — Washington Examiner‘s Kelly Cohen.

“When you open the Skittles and there’s no red ones.” — NBC News photog Paul Rignarambe.

“I spend 30 minutes everyday choosing a TV channel to leave on for my dog. Then I go to work, and people take me serious as an adult.” — Infowars reporter Joe Biggs.

A Question to Ponder

“If Trump is as bad as some Republicans say — why aren’t party elders like Romney entering the race to save the country?” — Fox News host Todd Starnes.

Waitress at the café: “Are you working on something top secret?”

A WaPo reporter’s attempt at humor

“Cupping my fingertips in preparation for another big day of writing.” — WaPo‘s Philip Bump.

Question for WaPo‘s Jonathan Capehart: Did you see the tiny speedos?

In other Capehart desires... “Men Olympic beach volleyball should be shirtless and in speedos. I’d definitely watch. Gander meet goose.”

Anyone give a s&%t about Sen. Evan Bayh?

“The progressive freak out in my email over the mere mention of Evan Bayh as a possible Senate Banking chair is pretty amazing.” — Politico‘s Ben White.

“With some exceptions, I usually enjoy rooting against the US during the Olympics because, let’s face it, y’all are kind of dicks when it comes to this stuff. But I absolutely LOVE Lilly King. She is right. Anybody who has ever been caught doping should never be allowed to compete internationally again.” — former D.C. journo Klaus Marre.

“I asked Gingrich if Trump was mentally fit for presidency. He paused and gave this answer.” — NYT‘s Michael Barbaro.

“Should I write a tell all book about everything I know about Barack Obama?” — GotNews editor Charles C. Johnson. 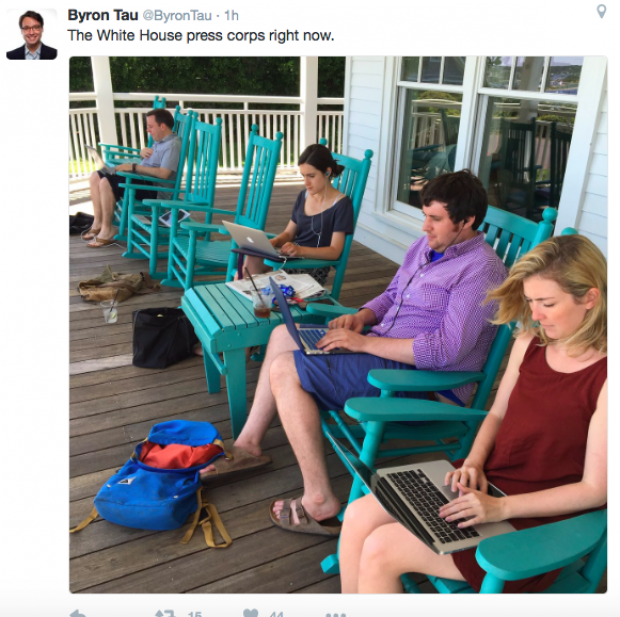