The U.S. Court of Appeals for the District of Columbia Circuit is scheduled to hear the astounding racial purge lawsuit against The Washington Post tomorrow morning.

But if present liberal media trends continue, nobody from the press but this writer, who first exposed the case for the Daily Caller opinion section in September 2013 and later wrote about it for The Mirror doyenne Betsy Rothstein, is going to attend.

Plaintiff David DeJesus, fired after nearly 20 years of award-winning service by a white boss who suddenly shrieked at him about supposed insubordination, yesterday told me that he feels like WaPo’s Invisible Man. 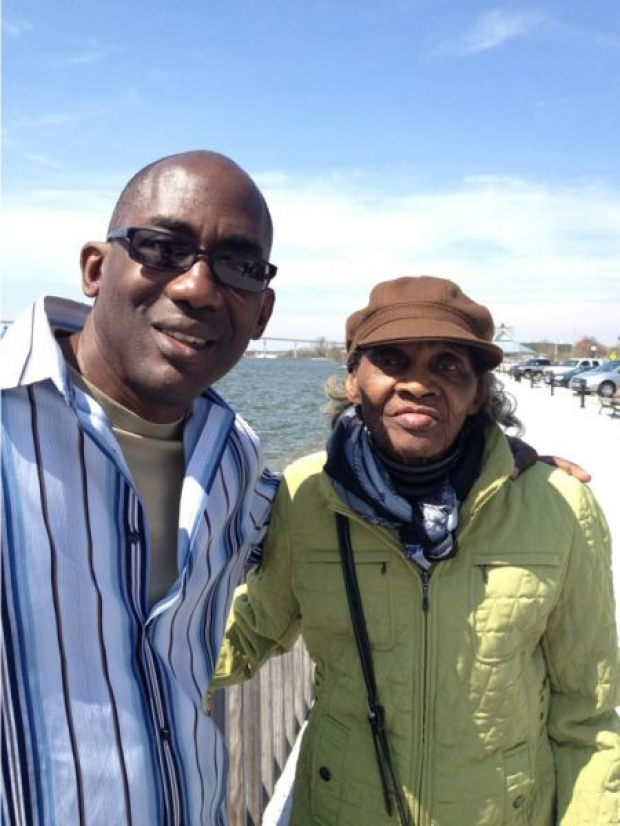 (David DeJesus with his mother/personal photo)

Shortly after breaking the story for The Daily Caller I personally informed host Rachel Maddow and then-Grio Editor Joy Ann-Reid, now an MSNBC host, about the federal claim. But they deep-sixed it as well.

In an email yesterday to the Washington Gadfly — cc’ed to Maddow, her fancy pants producer Steve Benen, MSNBC president and accused perjurer Phil Griffin and Reid — DeJesus said, “Evan, thank you from the bottom of my heart for being a tireless and passionate advocate for civil rights. It doesn’t matter to me who you work for as long as you’re willing to help shine a light on a problem that many are willing to ignore because it’s embarrassing or seems insignificant, or doesn’t grab the headlines like police shootings and mass killings, etc.

“Your work is successful. I’ve had colleagues at The Post, who’ve come across your coverage. Some have spoken out against disparate treatment, by filing EEOC complaints since I’ve returned because of your coverage.

“In fact, your willingness to stand up for me is one of the reasons I became more active in our guild/union where I expend large amounts of my personal time to fight for employee rights (ironically reporters), as well as non newsroom employees. What we do not confront will not change. Deeply appreciate your hard work driving change.”

Nobody at MSNBC even extended DeJesus the basic courtesy of a reply. So unless he gets beat up by a white cop on the way to the hearing it is a safe Rachel won’t be inviting him on her show anytime soon.

But I recently asked DeJesus to talk with me on camera about his battle. After several weeks, he reluctantly agreed, speaking in universal terms of his quest for “justice” rather than “racial justice,” just like Martin Luther King almost always did.

He spoke from a prepared text, citing African proverbs and Christian scripture to make the point that even one individual man can make a difference in the face of monumental injustice.

Unlike Washington Post affirmative action hire Wesley Lowery and Joy-Ann Reid, who personally refused to cover the lawsuit when she was editor of The Grio, is not a professional black. Raised by a single mother with his older, mentally disabled brother in the notorious Chicago housing projects, he was quietly living the American dream that Ta-Nehisi Coates, in his infinite wisdom, claims is not for blacks.

Now, he just wants it back.

In fact, when DeJesus sued the paper in 2013 for age and race discrimination, contending dozens of older blacks were forced out around the same time he was and replaced with younger cheaper Caucasians, he didn’t seek any press coverage. I found the lawsuit independently in the course of trolling court databases for interesting discrimination lawsuits against prominent Washington organizations.

Interestingly, the year before, when I  exposed an equally lurid sexual harassment and retaliation lawsuit against the conservative Family Research Council I gave it to Huffington Post honcho Sam Stein.  He dispatched an underling to report it within days and the story quickly ricocheted all over the internet. FRC settled the case shortly after all the embarrassing publicity.

Yet for some strange reason, when I gave the Washington Post lawsuit to Stein he refused to report it. The paid MSNBC contributor, who has reported less credible discrimination lawsuits against the conservative New York Post,  which allege individual wrongful dismissals, not massive racial purges, hung up on me last week when I asked him for an explanation while recounting the media cover-up for the New York Observer.  “Hi. This is Evan. How many blacks does the Washington Post need to fire before you report it? ”

The only substantive explanation I ever got to that line of questioning came from Wesley Lowery, media blogger Erik Wemple and his Politico counterpart Hadas Gold. Basically: I don’t need to report “your” story.

Can we dispense with that fiction already? This lawsuit, which would be front-page New York Times and Washington Post news if against any other major organization, is not “my” story.

I am white and Jewish. I am not the victim. I am not the black guy, who like other blacks at WaPo, got shrieked at by his white boss. I don’t benefit if the case gets mainstream press coverage and owner Jeff Bezos, very sensitive to bad publicity, quickly pays to settle the case.

It is David DeJesus’s story and his American dream turned into an unending nightmare that continues to this day. Married with three kids to support he also helps care for his brother Joseph and elderly mother in Chicago. He was unemployed for two years until a Newspaper Guild arbitrator ordered him re-instated, deeming the dismissal unjustified and a blatant violation of the union-required progressive discipline.

DeJesus sued for back pay and damages. In September 2013, then owner Don Graham instructed his lawyer to try and settle the case, according to court transcripts. But two months later when Bezos had formally assumed control he would not even give DeJesus the lousy $200,000 in back pay that he sought during a non-binding mediation session with a federal magistrate.

Depositions, discovery and multiple court motions proceeded. In September 2015, Federal District Judge John Bates, a Bill Clinton appointee, who, ironically enough, had presided over the Family Research Council lawsuit and allowed it to proceed to possible trial, granted summary judgment in favor of the Washington Post. Bates accepted the papers argument that DeJesus was fired for non-discriminatory reasons and all the racial harassment and targeting of other blacks for ouster cited in his lawsuit, including by three former employees in sworn affidavits, was legally irrelevant.

The Washington Gadfly spoke with DeJesus a few blocks from his office, where, according to sworn affidavits, very few blacks work with him at the advertising department anymore. 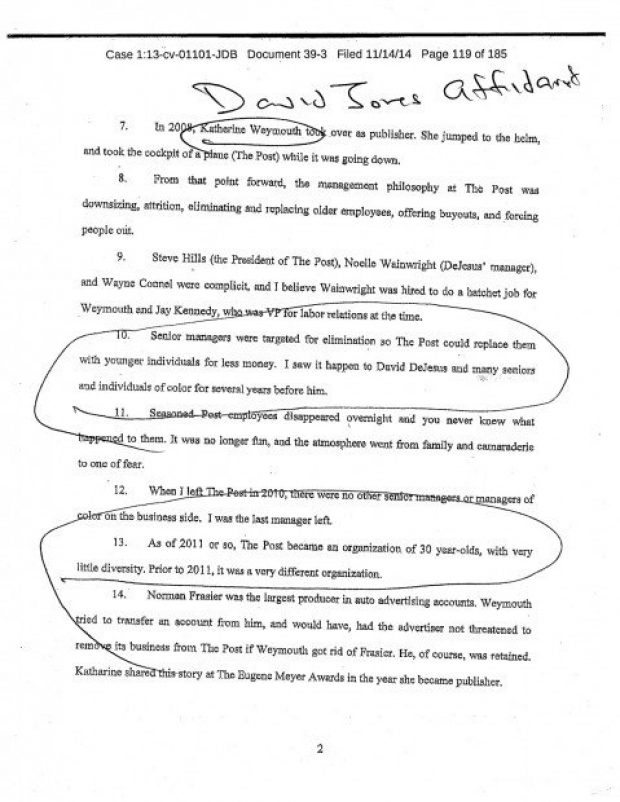