In the chaos of the 2016 election, a candidate unlike any other has risen from Twitter and gained instant popularity. The Sweet Meteor of Death 2016 (@SMOD2016) has over 23,000 followers and promised to be tough on Putin and Iran along with destroying all Earthly life.

I caught up with the Meteor in its orbit around Earth. He was kind enough to slow his pace to talk over direct message.

MP: Thank you for taking the time to talk with me today. I know you’re busy on the campaign trail.

SMOD: It’s less of a trail and more of an orbital trajectory.

MP: I see, so you’ve had your eyes set on Earth for a while now. Well, maybe to begin, tell me a little about yourself. Where do you come from? What are your origins?

SMOD: About 4.1 billion years. I was created during the Theia impact. 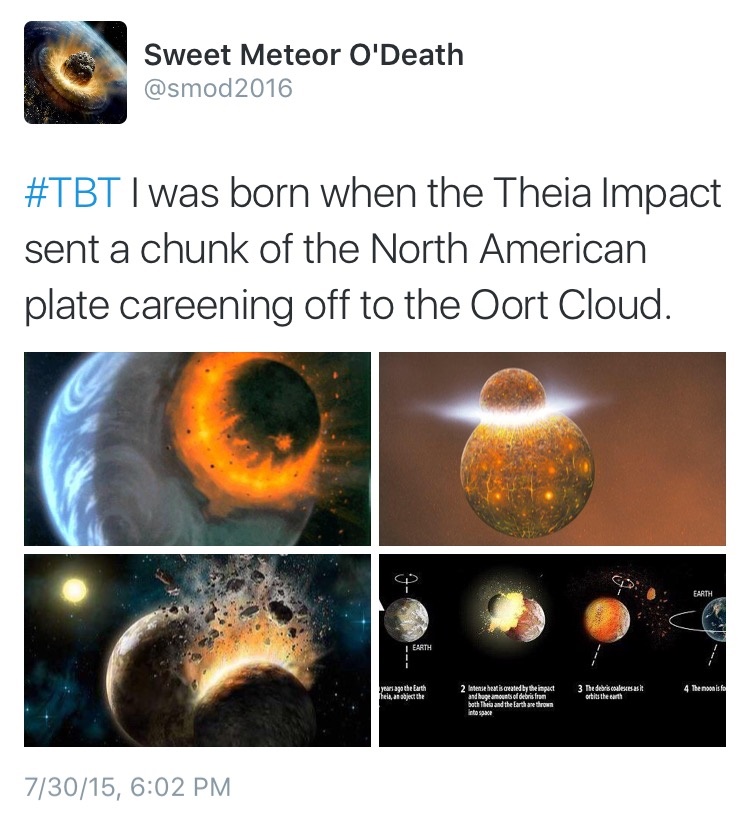 MP: Wow! So about the same time as the moon.

MP: That’s great. In American politics, in order to run for President, the candidate must be a citizen of the country. Do you consist of debris from America? How can voters be sure you don’t have Kenyan debris or foreign debris?

SMOD: They’ll just have to trust me. Maybe Sheriff Joe Arpaio can do a spectral analysis of my composition—if he can spot me.

MP: I suppose they didn’t have birth certificates 4.1 billion years ago…

SMOD: Right. Also, there’s an exception for candidates alive when the Constitution was signed.

MP: Oh, I see. So you’re an exception to the rule?

SMOD: No, but that’s an alternative argument to placate those who doubt my American birth.

MP: And what have you been doing for the past 4.1 billion years? What experience do you bring to the job?

SMOD: It’s more about what I haven’t been doing and what I promise to deliver. 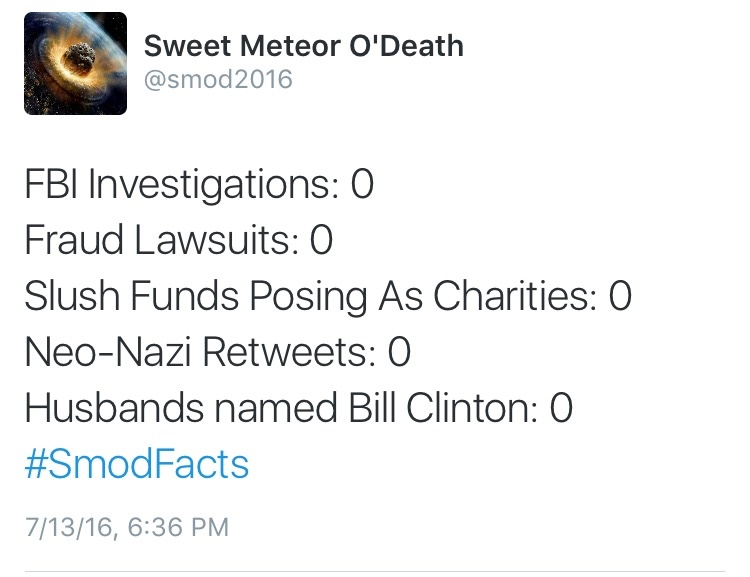 MP: You’ve definitely been transparent this election. That’s impressive for a presidential candidate.

Now, the Chelyabinsk meteor in Russia in 2013 promised everything, but effectively changed nothing. How are you different?

MP: I see. So the atmosphere surrounding this election doesn’t intimidate you? It has tempered many of your predecessors. 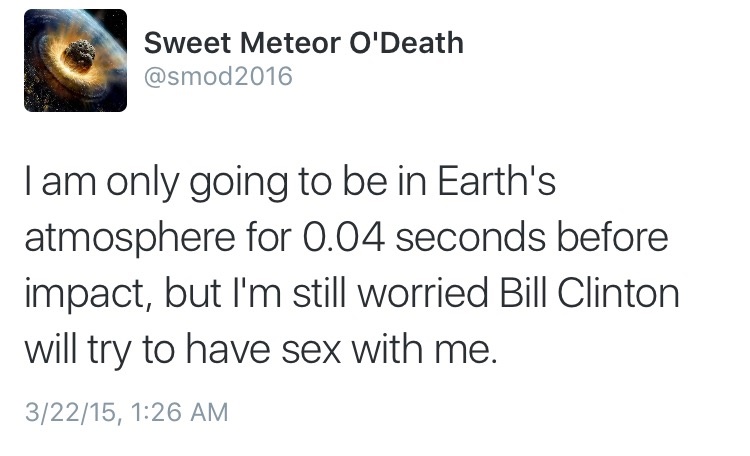 MP: That is a valid fear.

MP: What is the nomination process like to be the Sweet Meteor of Death? Are there many meteors who wanted this chance or are you a self-sacrificial meteor?

SMOD: Not a lot of certainty to it—it’s all physics.

MP: Are there divisions among the meteors about your mission? Is there a “destroy Earth” party and a “conserve the Earth” party?

SMOD: TBH, there aren’t many other sentient space rocks.

MP: That’s good to know as an Earthling.

Independence Day: Resurgence was recently released. Do you think that films like it are an example of media bias against extra-terrestrial Americans?

SMOD: I think it’s an example of a garbage movie.

MP: Ok, one last question before we go to policy: What made you want to run—Did God call you to it or were you attracted to the beauty of the Earth’s gravitational pull?

SMOD: I realized early on in the election cycle that there would be a lot of demand for a candidate who promised global mass extinction.

MP: Definitely a visionary. Now you’re rising in the polls—13%. What was it like to see your poll numbers for the first time?

SMOD: Those will go up. It was shocking that they were that low.

MP: There’s a lot of time between now and the election. Lots of things could change.

Let’s shift to policy. And the first question is on economics: In your Twitter account, you describe yourself as a “Precambrian conservative” and yet you seem to support Keynesian economics, particularly endorsing policies that precipitate his prediction that “in the long run, we’re all dead.” How do you reconcile these seemingly conflicted views?

SMOD: Ugh…Keynes. I’m closer to Hayek when it comes to the debate on central planning versus laissez- faire. Humans should stop trying to control each other’s behavior so much. Freedom is beautiful.

MP: Is that what drew you to destroy Earth? Tyrannical central planning?

SMOD: My impending impact with Earth wasn’t really my choice. That’s just physics. But yes, the evils of central planning do serendipitously coincide with my campaign promise.

ISIS has been on a lot of people’s minds because of the attack in Nice and National Security concerns at home and abroad? What is your plan to protect Americans from this threat?

SMOD: I plan on eliminating ISIS…and everyone else.

Now, Putin is a formidable opponent—especially because he took down your predecessor. How do you plan to deal with the Russian security threat?

SMOD: I think we need a “Russian reset.”

Just kidding, the Russia problem disappears with the end of human civilization.

MP: Good to know. Next question is on Hillary’s email server: Were you able to access Clinton’s emails from space? How would you have acted differently?

SMOD: When I destroy emails, the FBI won’t be around to recover them.

MP: Good point. That is a difference in strategies. And were you able to read her emails from space?

SMOD: I was. 90% of them were from Huma trying to explain to Hillary how to download an play Angry Birds.

MP: Wow…so that’s why they were classified! Good to know.

The next question is on the legalization of marijuana: Would you legalize marijuana use before full impact to ease the pain of annihilation?

SMOD: Sure, why not?

MP: Ok. And so would there be a period of time between your election and full impact for people to prepare?

Now, there are a lot of “left behind” conspiracies out there. Is there any part of your plan where human life might survive? Or certain lives would be spared?

SMOD: Except for sulfur-oxidizing bacteria living deep sea thermal vents, nothing will survive. 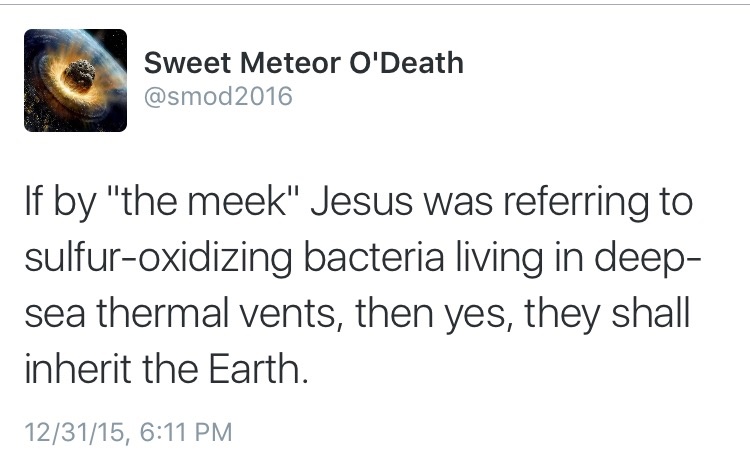 MP: You seem to be a God-fearing meteor. Is He ready to handle the lines in Heaven after your impact? Has he made additions to the heavenly border in preparation for judgement?

SMOD: Well, some of Earth’s earliest radio broadcasts were from Italy, so I guess you could say I had a Catholic education. That said, I don’t presume to know what God has planned.

MP: Ok, sounds good. Thank you so much for taking the time to talk with me! Is there anything you want to leave your followers with as a final note?

SMOD: Not right now. If I think of anything, I’ll tweet it. Thanks!

MP: Ok, sounds good! Enjoy your orbit and good luck with your campaign.