CNN “Reliable Source” host Brian Stelter is turning out to be anything but reliable.

For weeks now, he’s been sucking up to Hillary Clinton and making a pious name for himself by defending her against right wingers who insist she has serious health problems.

Well…guess what. She has health problems. As she exited a 9/11 memorial service, she had to be held up by staff as Secret Service tried to shield the episode with their bodies.

Specifically, as we all well know, she’s had a diagnosis of pneumonia since Friday and failed to mention it to the prodding, often preening campaign trail press corps.

Over the weekend, Stelter implored the media to be careful. “…Though there are these conspiracy theories which we should not give oxygen to saying that she’s secretly ill suggesting she is on her death bed which we can see she’s not,” he said with all the grace of a hippopotamus considering that the Clinton campaign committed a huge lie of omission, saying the Democratic candidate had heat stroke instead of pneumonia.

Stelter did concede that “there are legitimate questions to ask.”

What, is he going to offer a list of questions the media should be asking?

Hell, even Clinton’s own campaign admits they didn’t properly handle media questions about her health.

“Press secretary Brian Fallon also said the campaign made mistakes handling the situation on Sunday, specifically by not responding to questions for 90 minutes about Mrs. Clinton’s early departure from a 9/11 memorial ceremony in Manhattan,” the WSJ’s Laura Meckler reported Monday.

Stelter has been issuing a completely irritating directive to the media for several weeks now, repeatedly insisting on any CNN show that will have him on with his big head and sparkling teeth to say the media should not buy into right-wing theories about her health.

But what the f–k does Stelter know about Clinton’s health?

Clearly no more than the rest of us and pointedly no more than WaPo‘s Chris Cillizza, who, six days ago, whined, “Can we just stop talking about Hillary Clinton’s health now?” [Insert loud audience laugh track here].

At that point, Clinton was having coughing attacks. “Here’s the thing: This is a totally ridiculous issue — for lots of reasons — and one that if Trump or his Republican surrogates continue to focus on is a surefire loser in the fall,” Cillizza wrote.

He cited a letter from Clinton’s doctor saying she’s in “overall good health.”

“So, to believe that something is seriously wrong with Clinton, you have to a) assume her doctor lied and b) that her coughing, which often happens when someone catches a cold or spends a lot of time speaking publicly, is a symptom of her deeper, hidden illness. That seems, um, unlikely to me?”

Clinton’s health issue, UM, wasn’t, as Cillizza recently claimed, a simple cough. He defended the Democratic candidate in a recent column in which he cast a cute moralistic frown to anyone who could possibly think anything worse was wrong with her. He even hilariously used his own cough as proof.

“The simple fact is that there is zero evidence that anything is seriously wrong with Clinton. If suffering an occasional coughing fit is evidence of a major health problem, then 75 percent of the country must have that mystery illness. And I am one of them.”

If some on the right are going too far in what may be wild pronouncements that Clinton has Parkinson’s disease or a neurological disorder that involves seizures, perhaps the rest of the media are in incredible denial and not pushing hard enough to find out what is really happening.

If her campaign told one lie of omission, couldn’t there be more?

Last week, NBC’s Andrew Rafferty rightly covered her cough, only to have the reporter told to “get a life” by Clinton camp. 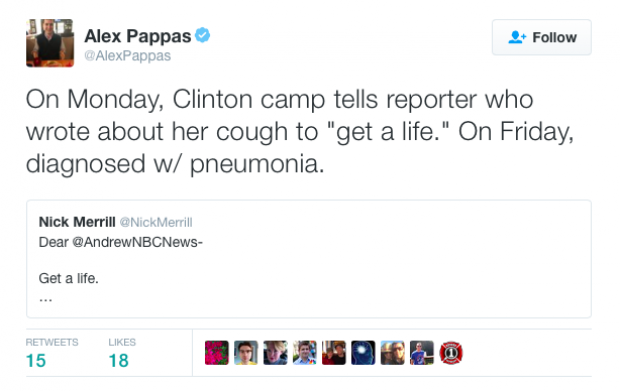 In mid-August, Stelter went after FNC’s Sean Hannity for spreading “conspiracy theories” about Clinton’s health and not being interested in the truth: “Let me be clear. That was reckless speculation by Sean Hannity. All of it… Her doctors say she is not physicially fit to be president. Conspiracy theories are so much more interesting than the truth. But the last time I checked, Fox still has the word news in its name.”

And the last time I checked, CNN’s nickname was still the Clinton News Network. Which isn’t fair considering there are plenty of other journalists who work there who don’t operate like he does. But it is what it is.

But lastly, who is Stelter to be issuing directives to the media?

In response to Stelter’s bleating about him, Hannity said CNN should fire “that idiot pipsqueak Brian Stelter.”

As his colleague, CNN’s Fareed Zakaria has said of Donald Trump, Stelter is proving himself to be quite the bullshit artist. The Hill‘s media writer Joe Concha took a baseball bat to the CNN host in a column published Monday.

“Lately it appears that even Internal Affairs/media reporters are compromised, biased and even dishonest,” he wrote. “Exhibit ‘A’ is CNN’s Brian Stelter in his reporting on Hillary Clinton’s health issues, or per his consistent narrative for weeks, total lack of issues.”

Concha stressed that President Obama‘s own ex-physician has stated that Clinton should have a neurological exam — a detail that Stelter has left out of his reporting. Dr. Drew Pinsky, formerly of HLN, recently said Clinton may have more serious health issues than she’s letting on. Shortly thereafter, he was out of a job.

On Twitter, Stelter and Concha grew testy with Stelter saying Concha was “cherrypicking” what he should include during breaking news. Concha replied, “The former ex-physician of the president saying Hillary Clinton should have a neurological exam on CNN air is cherry-picking?”

But Stelter isn’t alone in his failed attempt to take a higher, condescending, ethical ground to coverage.

It’s one thing to go on a condescending rant against conspiracy theories. It’s quite another to not have enough facts to back up your claim — and yet you make the claim anyhow. Right…the right hates her and invents new illnesses for her and Trump’s doctor is a quack. Sure — he seems like a total whacko and it appears he wrote a letter that made Trump ecstatic.

But that doesn’t mean Clinton’s campaign is on the up and up.

“???” said ex-MSNBCer Touré Neblett on Twitter when WaPo‘s Stu Rothenberg said the public should have been promptly informed about Clinton’s pneumonia diagnosis.

Neblett launched a vociferous defense about her health.

“This is typical GOP overreach. Clinton did not faint but by saying she did you make it easier for her to get out of this one. We have a video of Clinton entering a van and getting help entering, as is common among human beings. If she was having a serious medical issue she would not be standing alone unaided for a while before entering said van. You’re taking the conspiracy theory seriously. She was weak-kneed in the heat. Far from fainting and a serious medical problem.”

“All u have to do is read the hateful comments about Hillary’s health incident today & then ask yourself, whose America do u want to live in?” he asked on Twitter.

HuffPost also fiercely defended Clinton, saying we should admire her for how hard she’s working. To the lefty site it’s apparently a new low for the media.

The writer pointed out how deplorable it was that former NBC anchor Tom Brokaw said Clinton should see a neurologist.

Even MSNBC’s Andrea Mitchell, a host on the lefty network MSNBC, couldn’t defend Clinton Monday morning. In an appearance on “Morning Joe,” she said Clinton’s lack of transparency was a terrible thing to do to the media. She quickly followed up by saying Trump’s own lack of disclosure concerning his health and his taxes is also unacceptable.

Just in case Clinton is spreading something by breathing, The Daily Caller is taking precautions. 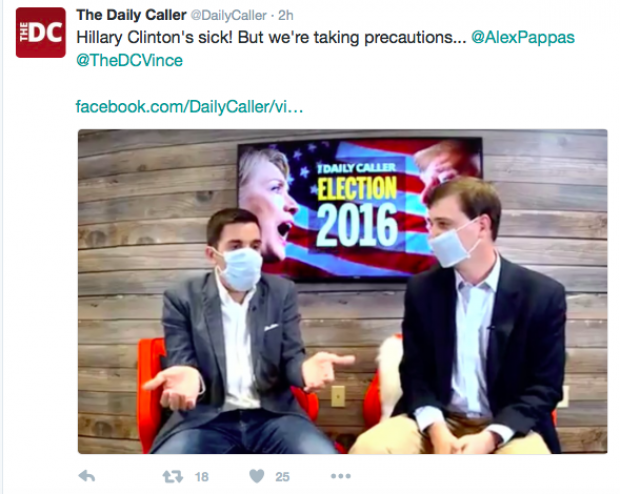 UPDATE: Stelter wrote The Mirror via Twitter’s Direct Message system to pass along his commentary from Ashleigh Banfield’s program. “For sake of fairness, my 12pm segment on CNN was highly critical of Clinton and her press aides,” he wrote.

How the Clinton campaign’s secrecy made a bad situation worse — my comments on @CNNAshleigh‘s show https://t.co/f5ilNdGIsa

I had a question for Stelter: If Hillary Clinton wins and she tries to hire him, would he say yes?

UPDATE #2: Stelter had no hesitation about a possible career move to the Hillary Clinton campaign. “Absolutely not,” he told The Mirror when asked if he’d ever work for Clinton. “I’ve been a journalist since I was 18 years old. That is my only career ambition.”