Amy Goodman, a reporter for the left-leaning Democracy Now! news show, was charged with a Class B misdemeanor for allegedly trespassing when reporting on the Dakota Access Pipeline protests in North Dakota, the Dickinson Press reports.

In Goodman’s video, guard dogs from a private security company hired by Dakota Access Pipelne can be seen with blood on their mouths, people showing bite marks, and a dog attacking a horse. Protesters were galloping on horses alongside adults and children running. Security was also using pepper spray to ward off the Native American protesters. Six people were treated for dog bites, and approximately 30 people were pepper-sprayed. 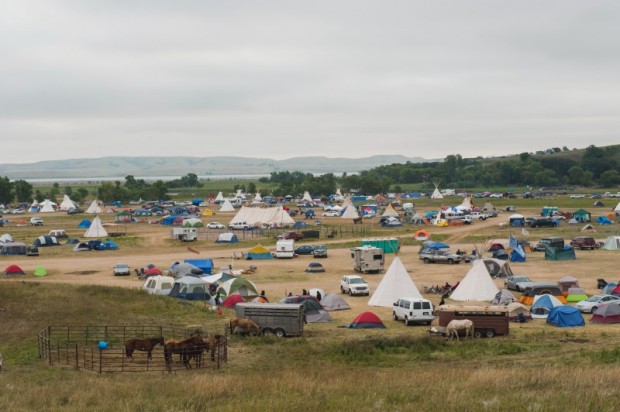 The Seven Council camp, one of three encampments that have grown on the banks of the Cannon Ball River. REUTERS/Andrew Cullen

Over the past two weeks, protests have been taking place in North Dakota and in Washington, D.C. The pipeline, which was announced in 2014, has drawn outrage from the Standing Rock Sioux tribe, who say the pipeline will damage their main source of water, intrude on their property, and disrupt a burial ground. The pipeline will run from North Dakota to Illinois, though the Obama administration ordered construction to stop last week.

One protester said, “No one owns this land. This land belongs to the Earth. We are only caretakers. We’re caretakers of the Earth.”

Another protester said, “It’s about our rights as Native People.”

This is the same tribe which was the mascot of the University of North Dakota, now renamed the Fighting Hawks, as opposed to the former Fighting Sioux.

Goodman said in a statement, “This is unacceptable violation of freedom of the press. I was doing my job by covering pipeline guards unleashing dogs and pepper spray on Native American protesters.”