The Associated Press and The Hill both ran with headlines Tuesday that depicted a congressman’s wife as a prostitute.

This is not the story.

The actual story concerns a new book that claims that Rep. Charles Boustany (R-La.), who is running for U.S. Senate, used the services of prostitutes who were murdered. Boustany’s wife, Bridget, called the reports against her husband “lies” in an email to reporters. She also called him a “loving husband” and “incredible father” to their children.

The new book in which the claims were made is by investigative jounalist Ethan Brown is: Murder in the Bayou: Who Killed the Women Known as the Jeff Davis 8? The book examines the murders of eight Louisiana prostitutes.

The Hill‘s headline quickly changed. The AP‘s has not. 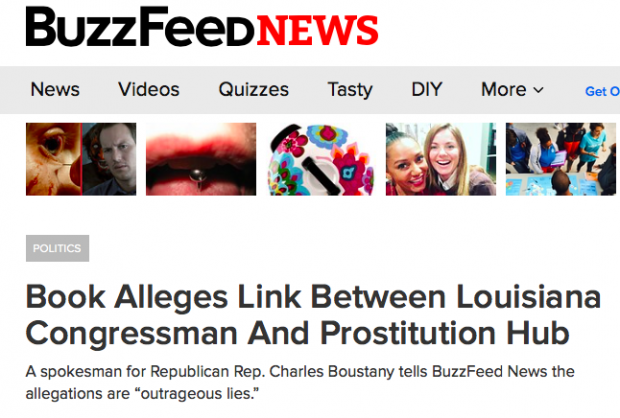 The AP‘s story has a funny twist. The GOP frontrunner in the race, Treasurer John Kennedy, vehemently insisted he had NO ROLE in what Boustany’s campaign claims is a dirty story packed with lies.

Kennedy takes great care to repeat all the claims in his statement.

“I want to be very clear that my campaign played absolutely no role in creating this story alleging Congressman Boustany’s sexual relationships with prostitutes that were later murdered, his staff’s alleged involvement in running the bar and hotel where this illicit behavior took place, or publishing the book,” Kennedy said in a statement that said the treasurer and his wife were keeping Boustany and his family ‘in our prayers as they deal with this.'”

Gee, how thoughtful of him.

The Hill‘s story does not include that statement.