As you know if you’ve been paying attention for the past quarter of a century, Hillary Clinton lies about everything. Ev-er-y-thing. Every little thing. So it should come as no surprise that she even lies about how much water she drinks.

In case you’ve been off-planet, on Sunday this happened to the next President of the United States:

This is being described, by media outlets that really want her to win, as “stumbling” and “wobbling.” What I see is a woman collapsing into the arms of her aides and being carried into her van. If that’s not what you see, try Googling “local optometrists.”

Glenn Thrush and Brianna Ehley at Politico are trying to aid the Clinton campaign’s damage-control efforts this week, in a piece titled “The inside story of Clinton’s sick day.” (Because that’s all this is, folks: a sick day!) So, what’s wrong with her? Turns out that it’s nothing serious, really:

The real issue is chronic dehydration, exacerbated by her lung problem and Clinton’s reluctance to drink water, which has become a source of tension with her staff.

“She won’t drink water, and you try telling Hillary Clinton she has to drink water,” said a person in her orbit – who described a frenzied rehydration mission that included multiple bottles of water and Gatorade.

On Monday, Bill Clinton told Charlie Rose that his wife has suffered from similar bouts over the years —an account supported by at least one of her staffers interviewed by POLITICO. “Rarely, on more than one occasion, over the last many, many years, the same sort of thing’s happened to her when she got severely dehydrated, and she’s worked like a demon, as you know, as secretary of state, as a senator, and in the years since,” Clinton said.

Oh, okay. She got pneumonia and collapsed because she won’t drink water. And this isn’t the first time something like this has happened.

Which is weird. As Jeremy Stahl at Slate notes, Clinton said something very different to Katie Couric back in 2008. Y’know, back when Hillary was a spry and sprightly 60 years young. Here she is bragging to Couric about her “stamina” and “resilience.” How does she do it?

KATIE COURIC: Having said that, do you pop vitamins? Do you mainline coffee?

HILLARY CLINTON: I take– I take vitamins. I– I drink tea, not coffee anymore. I have really stopped drinking diet drinks. Because I found that they gave you a jolt, but they weren’t good over the long run. I used to drink a lot of them. I drink tons of water. Just as much water as I can possibly drink.

So there you have it. Hillary Clinton stays vibrantly healthy by drinking as much water as she can, and she doesn’t want her aides telling her to drink more water because she doesn’t like to drink water.

Fun fact: The word “whiskey” comes from the Gaelic word uisge, or “water.” And “vodka” is the diminutive of voda, or “water.” So maybe Hillary’s aides could trick her into drinking more water that way. We all know Grandma loves the sauce.

Of course, none of this matters. At this point, nothing Hillary Clinton says or does is going to sway anybody’s vote in November. (I’m writing in McAfee.) If you don’t care about her blatant lawlessness and corruption, this isn’t going to change your mind about her.

If you’re determined to believe whatever you’re told, you won’t even question cynical nonsense like this:

She’s just so dedicated to you, America. She’s “powering through”! Yep, if there’s one thing Hillary Clinton craves, it’s power.

So you have your answer: She got overheated, but really it’s pneumonia, except not the contagious kind because she was playing with and hugging little kids, and she fell down because she drinks lots of water and absolutely refuses to drink water. Now shut up until November 8.

1. Cough like a dying coal miner
2. Collapse in the street
3. Hug a kid
4. Tell everybody you have pneumonia
5. Wait for Trump to screw up

Get well soon, Hillary. But if worst comes to worst, keep in mind that you’ve still got options:

P.S. Yes, yes, I know Trump also lies about everything all the time. I’ve said so over and over and over. I’ve lost “friends” for saying so. Pointing out one liar’s lies doesn’t mean I’m covering up the other liar’s lies. They both stink.

P.P.S. This might be a clue to #HillarysHealth. Allison Aubrey, NPR: 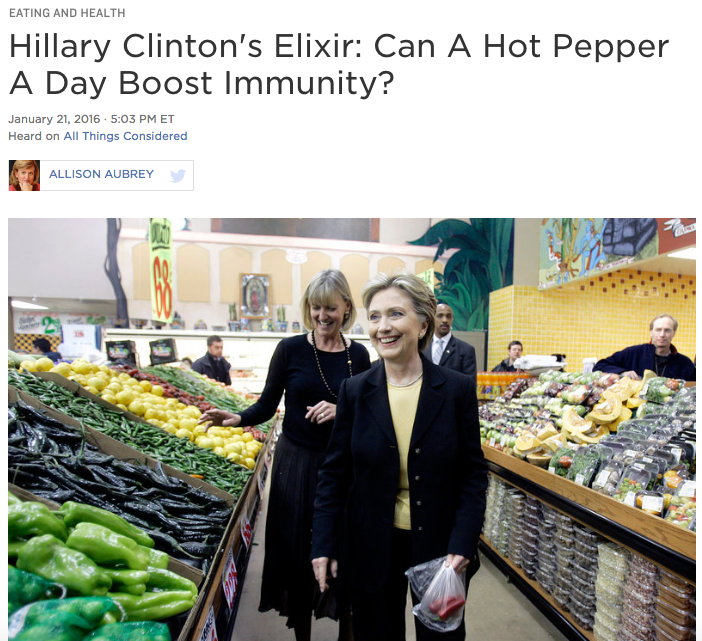 The presidential hopeful has a serious jalapeño habit. She told All Things Considered host Ari Shapiro it started back in 1992, when it was her husband, Bill Clinton, who was running for the White House.

“I read an article about the special immune-boosting characteristics of hot peppers, and I thought, well, that’s interesting because, you know, campaigning is pretty demanding,” Clinton told NPR.

Now Clinton says she eats a fresh hot pepper every day, and it’s “maybe … one of the reasons I’m so healthy, and I have so much stamina and endurance.”

So here’s what probably happened: Hillary wasn’t feeling too great, so she decided to eat a whole bunch of jalapeños to get better. But then she didn’t drink enough water, so her body just got so healthy that she passed out in the street and had to be dumped into her van like a sack of potatoes.

Prove that’s not what happened, teabaggers!