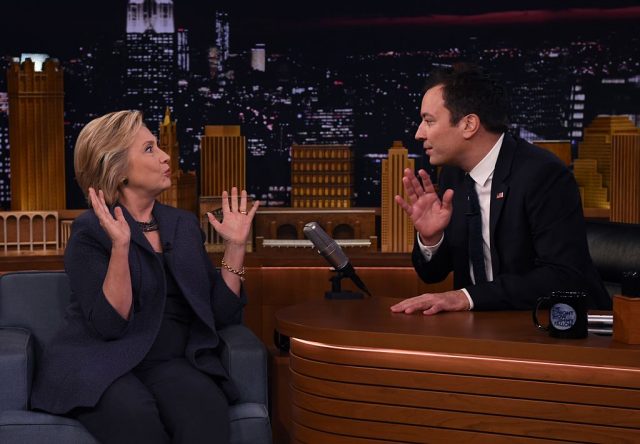 During her interview, the Democratic nominee said she never she never dreamed of being president as a child because she didn’t think it was possible for a woman. (RELATED: Donald Trump’s Appearance Gives ‘The Tonight Show’ A Ratings Boost)

“It wasn’t even in the realm of the possible for girls back then,” Clinton said. “That’s what’s so exciting about this campaign. We have slowly but steadily knocked down all the barriers. Some people are not happy about the barriers being knocked down — your former guest, Donald Trump.”

“He has refused to actually admit that Obama is an American and for five years he’s been hammering in this so-called birther movement, which I think is so sickening,” Clinton continued. “He went after a distinguished federal judge because he was born in Indiana of Mexican heritage, called him a Mexican. He went after the Gold Star family whose son was heroically lost in Iraq because they’re Muslims.” (RELATED: Jimmy Fallon Wore A Surgical Mask While He Interviewed Hillary Clinton)

“You have to take a deep breath and say to yourself, ‘What kind of country do we really want?’And I want a country where barriers are knocked down. And little girls and little boys can feel like they can go as far as their hard work will take them.”