The Obama administration’s top negotiator on the Iran nuclear deal — and a candidate for secretary of state in a Hillary Clinton administration — told the FBI that hacking attempts were made on her personal email account several years ago during a negotiation session.

The bombshell revelation comes from FBI notes taken during a Feb. 3 interview with a former State Department official. Though the official’s name and sex are redacted throughout the notes — which were compiled as part of the Clinton email investigation — other clues in the document strongly suggest that it is Wendy Sherman.

A close associate of Clinton’s, Sherman’s name has been floated as Clinton’s secretary of state should the former first lady be elected president.

According to the FBI’s notes, Sherman, who is now an adviser at the international consulting firm Albright Stonebridge, told investigators during her interview that she used her Gmail account for government business, often while traveling.

It “was not uncommon for [her] to have to use [her] personal Gmail account to communicate while on travel, because there were often times [she] could not access her DoS unclassified account,” the report reads.

She said that she was not aware of any specific instances where she was notified of a potential hack of her State Department or personal email accounts or those of other State employees.

“However, [Sherman] explained [she] was sure people tried to hack into [her] personal email account and the accounts of [her] team approximately two years ago during [redacted] in the Iran negotiations.”

Most of the next few sentences in the notes are redacted but seem to suggest that the hacking attempt was made using a phishing email.

The incident was reported to State Department’s diplomatic security bureau and was traced back to an entity whose identity is redacted. 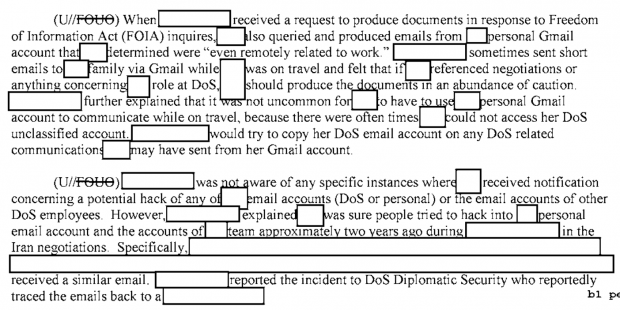 While it is no surprise that hackers would attempt to infiltrate the negotiating teams’ email accounts — the U.S. government has robust spy operations that try to do the same thing — Sherman’s use of a personal account while overseas likely increased her chances of being hacked.

Sherman’s identity as the interviewee is indicated by a portion of the interview discussing a 2013 speech given to the American Foreign Service Association.

Footage of that speech was uncovered by Fox News earlier this year. In it, Sherman appeared to disclose that State Department officials used Blackberries to send and received classified information. (RELATED: Video Indicates Hillary Used Her BlackBerry To Send Emails ‘That Would Never Be On An Unclassified System’)

“Now we have Blackberries, and it has changed the way diplomacy is done. Things appear on your Blackberries that would never be on an unclassified system, but you’re out traveling, you’re trying to negotiate something,” she said at the conference.

Asked about those remarks, Sherman told investigators that she “was trying to explain how technology has allowed for a different form of information flow, and ultimately sped up the way in which DoS does business.”

She said she “was not implying that information Clinton may have been communicating classified material on her Blackberry concerning the unclassified matter.”

Sherman left the Obama administration last year after the U.S. and five other nations reached a deal with Iran that aims to prevent it from developing nuclear weapons. Critics of the deal say that the U.S. made too many concessions to Iran and that the Islamic regime’s leaders cannot be trusted to curtail production of uranium used for nuclear bombs.

Sherman caused a stir in 2013 when she told Congress that “deception is part of [Iran’s] DNA.”

She did not return an emailed request for comment for this article.