You know things are bad when Washington gamesmanship has finally gotten to IJR‘s Benny Johnson.

He’s sick of Washington pundits and other “hacks” who profess to know anything about politics. He’s — gasp! — tired of selfies and anyone who tweets a lot. (Here’s looking at you Andrew “Cat Lover” Kaczynski and all the rest of Johnson’s former coworkers at BuzzFeed).

So Johnson and some of his coworkers “took to texting” the non-political people in their lives to ask what they thought about last night’s presidential debate between Donald Trump and Hillary Clinton.

He even asked his grandma, who gave, by far, the cutest answer of them all.

Johnson is calling this “Benny polling.”

The consensus? Well, there really isn’t one. But some of the answers are quirky and amusing.

Your sure as hell not going to get this kind of street smart brilliance out of Kayleigh McEnany or Scottie Nell Hughes. 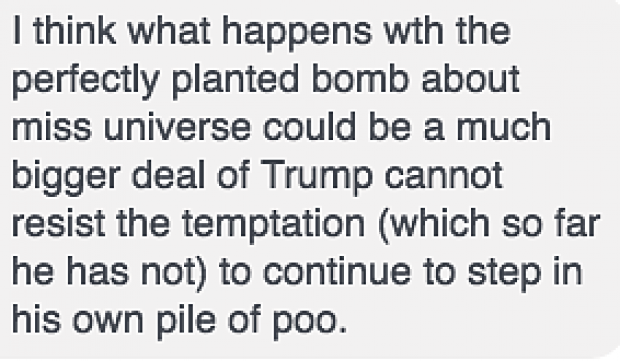 And thankfully his sweet grandmother loves him.

“I’m tired of hearing what you pundits and hacks think,” Johnson wrote on Facebook. “I mean, I get it. You worked in the first Bush Administration. You wrote a book about the 2008 election. You tweet a lot and therefore deserve to be on TV as a ‘millennial expert.’ You parlayed your blind support for an unpopular 2016 candidate into a lucrative cable news gig. Bravo. So what are your expert insights on last night’s debate? I don’t care. I really don’t. If there is one thing the 2016 election has done it’s make fools of all of us. No one is safe. No one is right. Polls are broken and opinions are cheap. So I asked the only people I know who will give honest answers.”