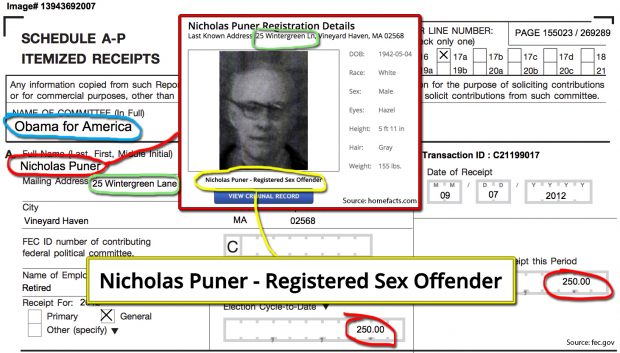 The convicted gay pedophile who this weekend endorsed Hillary Clinton also donated $250 to Barack Obama’s re-election campaign in 2012 under the same Massachusetts address as his sex offender registration.

Did Obama for America bother to vet donors in 2012? If you Google Nicholas W. Puner his sex offender registration show up on the first page.

Puner was convicted in 2000 of sodomy in the third degree for having sex with a 14-year-old boy and 15-year-old boy, apparently on the same day. He got 60 days in jail.

The next year Puner, a Harvard Law School grad, was arrested for sexually explicit online talk with an undercover cop posing as a 14-year-old boy. That got him nearly three years in the slammer.

Upon completion of parole in 2005, he petitioned the court to lower his Level 3 sex offender status to Level 2, citing a psychiatrist’s letter that he “had been a closet homosexual, but was not a pedophile,” according to the detailed account of his case on criminal defense attorney Stephen Bilkis’s blog.

That article also shows up on the first page of Puner’s Google results. So maybe the campaign did Google him but decided returning the $250 donation would be homophobic? After all, in 2009 Obama bestowed the Medal of Honor on gay icon Harvey Milk even though his sexual relationship with a 16-year-old is fairly well known.

The FEC press office says that the Obama for America campaign fund remains operative so the donation theoretically could be returned by treasurer Marty Nesbitt. Nesbitt is currently chairman of the Obama Foundation, which is planning his presidential museum.

2012 deputy campaign manager Juliana Smoot, an Obama Foundation board member, did not respond to repeated emails asking if she would return the donation or reject a presidential library contribution from Puner.

But, hey, if the mainstream media ever presses her on the donation, Smoot could just take a cue from Obama’s own defense for enlisting retired domestic terrorist Bill Ayers to help launch his political career.