Immigration to the United States from the countries of Saudi Arabia, Bangladesh, Iraq, Egypt and Pakistan is accelerating as the foreign-born population of the country continues its record climb.

The numbers from a new Center for Immigration Studies analysis of fresh census data show the number of U.S. residents who were born in those countries grew the most in recent years. Those growing populations of legal and illegal immigrants are not insubstantial pieces of a foreign-born population that now consists of 42.4 million people — the largest number ever recorded.

The number of people born in Saudi Arabia who are now living in the country grew a whopping 93 percent from 2010 to 2014, CIS found, nearly doubling in size from 43,000 residents to 87,000 residents. By comparison, the growth rate of the Polish immigrant population fell by 11 percent over that same period and the growth rate of the Mexican immigrant population flatlined.

Following Saudi Arabia are the foreign-born populations of Bangladesh, which grew by 37 percent, and Iraq, which grew by 36 percent over that same time period. Of the 217,000 Iraqi-born people living in the country, a whopping 160,000 of them arrived sometime between 2010 and 2014. 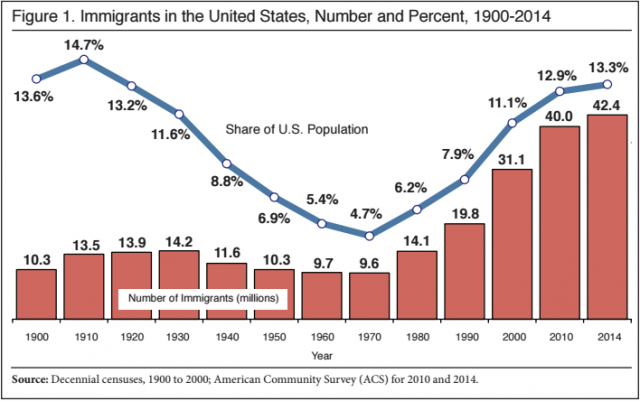 The people living in the country who were born elsewhere are now 13.3 percent of the total population, the largest share in about 100 years. Nearly one in five U.S. residents will be an immigrant by 2060, largely due to legal immigration rather than illegal immigration, and by 2023 the foreign-born population is projected to exceed 51 million.