Look up Donald Trump at the Internet Movie Database, and you see the following: 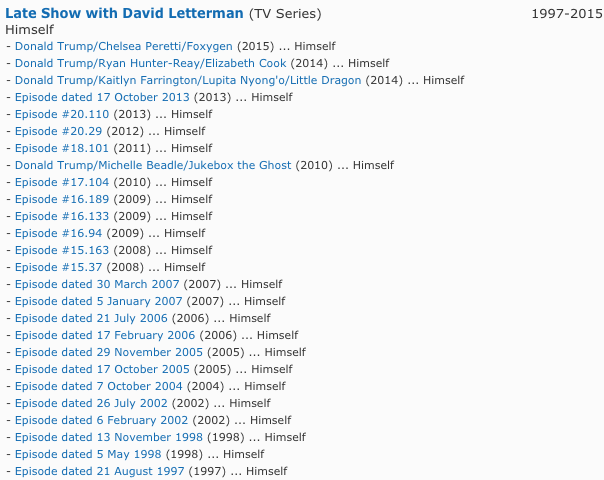 I count 30 Donald Trump appearances on David Letterman’s show, over the course of 29 years. That’s a lot fewer appearances than Regis Philbin (136), but a lot more than most of us (0).

Of course, this doesn’t mean the two of them are friends. By all accounts, neither man can be said to have any real friends. But Letterman clearly didn’t have any problem giving Trump so much free publicity for so many years. It was a mutually beneficial arrangement. Trump promoted himself, and Letterman got the ratings.

Now it’s different. Now, neither scumbag has to pretend to like the other one. Dave Itzkoff, NYT:

In his 33 years as a late-night entertainer, David Letterman was both a host and an antagonist to politicians of every stripe…

Mr. Letterman, 69, had an especially feisty relationship with Donald J. Trump, who had been a frequent guest and sparring partner since the 1980s…

Now Mr. Letterman says that Mr. Trump is no longer a laughing matter…

I’ve known Donald Trump for a long time and I always thought he was exactly what New York City needed to have: the big, blowhard billionaire…

So now, he decides he’s running for president. And right out of the box, he goes after immigrants and how they’re drug dealers and they’re rapists… And then, I can remember him doing an impression, behind a podium, of a reporter for The New York Times who has a congenital disorder. And then I thought, if this was somebody else — if this was a member of your family or a next-door neighbor, a guy at work — you would immediately distance yourself from that person… If you can do that, and not apologize, you’re a person to be shunned…

And, unlike Jimmy Fallon:

If I had a show, I would have gone right after him.

Right. Except you did have a show, Dave.

I tend to agree with Letterman’s criticisms of Trump. But here’s an important difference: I wasn’t in a codependent relationship with the man for almost 30 years.

Is Trump’s behavior really that shocking to people like David Letterman? If so, how did they blind themselves to his faults for all those decades? He’s no different now than he was then. That’s the whole point of Trump. He doesn’t change. He can’t. Even if he wanted to… what’s in it for him?

Letterman, and plenty of other people who are now panicking, had no problem playing along with Trump when there was something in it for them. They didn’t take him seriously as a presidential candidate. Neither did I, although of course I played a much smaller part than somebody like Letterman. And now, here we are.

Another big difference is that, unlike most of these people, I didn’t want Trump to become the GOP nominee. They did, because they assumed Hillary would beat him easily. That remains to be seen, but right now the race is a lot closer than most of us thought. Which is exactly why Letterman is now freaking out. Now, Trump needs to be shunned.

You can go away again, Dave. Go back to your Stupid Prospector Tricks.