Hillary Clinton is playing the victim card once again, claiming that Donald Trump “stalked” and tried to “dominate” her during the second presidential debate.

In an interview that airs Friday, the Democratic presidential nominee said on “The Ellen DeGeneres Show” that it was “weird” feeling his presence behind her last Sunday at the debate and that she could just “sense” his anger following the leaked audio of him speaking in a sexually aggressive manner about women. (RELATED: Hillary Clinton ‘Disappointed’ She Wasn’t Asked About UFOs On ‘Fallon) 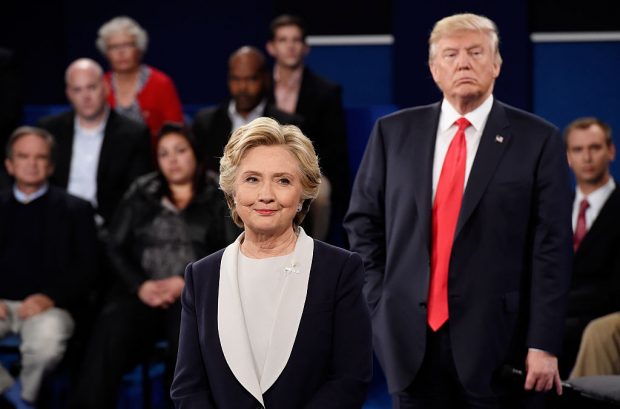 “My opponent, Donald Trump, was going to try to dominate the space almost to the exclusion of the people who were sitting there,” Clinton said. “I mean, they were sitting there so that we could talk to them. And because of the revelation of the public video and everything that came out on ‘Access Hollywood,’ he was really all wrought up and you could just sense how much anger he had.” (RELATED: Chrissy Teigen Says ‘Vote For The Person Who Is Not A Sociopath)

“And, so he was really trying to dominate and then literally stalk me around the stage, and I would just feel this presence behind me,” she added. “And I thought, ‘whoa this is really weird’ –so I was just trying to stay focused.”

Clinton also complained that the leaked tape was a distraction from the issues and policies she wanted to talk about.

“It’s frustrating, I feel such a sense of obligation to people,” Clinton said. “Everybody makes mistakes, don’t get me wrong, I obviously have made more than my share, but to run against somebody and debate somebody who is consistently just spewing forth falsehoods.”

“And when you catch them and when you say no what a minute you said this, you actually were on record on this, ‘no I wasn’t,’ and just hopes that people will forget it.”