AimWell Laser Target Systems is a portable target shooting system that utilizes a laser inserted into your firearm or an AimWell laser enabled inert Glock 17 replica handgun which is shot at movable targets with performance measured by software installed on your computer.

Remove the green USB and insert that into your computer. Insert the black twister USB drive. Follow the wizard’s installation instructions. Installation should take just a few minutes. If you have any trepidation that this is difficult be assured it is not.  Installing the software is not a barrier even for the technology challenged. Once installed an “AIMWELL Targets” icon will appear on your desktop. You need a modern computer to run the software. 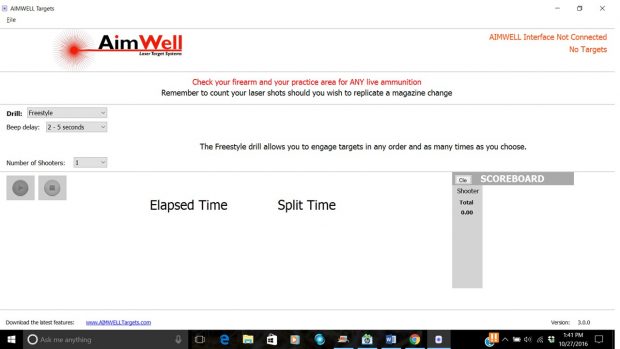 -Screen Shot of the software

Step 2.  Turn On The Targets

Press the button to the ‘on’ position. The target will turn red. Seconds later the target turns blue. Blue is the ready position. 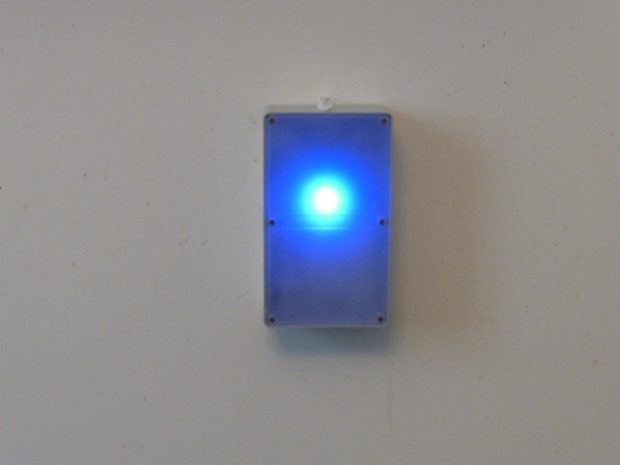 Take a shot. The blue light will turn off if you hit the target then return to the ready blue light two seconds later.

Step 4. Use The Software

Using the software is profoundly easy and self-explanatory. Use the pull-down menu to select a drill. There are four drills from which to choose.

Bill Drill: Shoot one target as fast as you can 6 times.

Freestyle: Engage what you want as many times as you want.

Select the number of shooters.

Next you will hear “shooter ready” and a few seconds later the drill will start. The drill concludes when you complete the drill parameters.

The software interface will immediately indicate your drill time and split times for up to four shooters.

How The Laser Gun Works

The provided gun has the same basic dimensions as a Glock 17. The bright orange slide is fixed. The body of the handgun is black. There is a magazine release that will drop the weighted magazine and a rail on the underside of the gun to attach a light. The sights are adjustable for windage.

When you pull the trigger the laser will fire once. The trigger creep and break are similar to a striker fired handgun. The trigger resets when let forward and is ready to fire immediately. AimWell literature states, “guaranteed 1 million trigger pulls and over 250,000 laser rounds.” So you have plenty of laser bursts to train for many years.

This was fun: I took the targets out at night and fired from 25 to 40 yards and it worked great. I found I could see the laser up to 100 yards.

Something important to note is that you don’t have to run the software to use the system. The software is to use the drills and measure your progress. My night shots took place with my computer turned off. 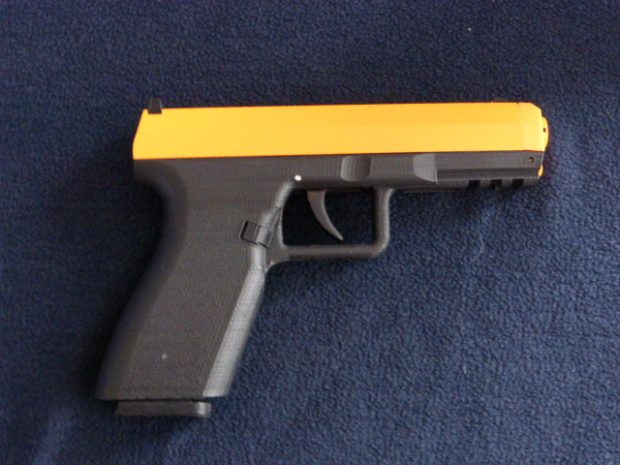 Why Buy A Laser Training System

Training is expensive and time consuming. It is nearly impossible to train at a “shoot house” as law enforcement does. Range rules are often very strict to the point where you can’t draw your gun from a holster. Ranges usually require one target at a fixed distance. The AimWell system solves these problems.

Here Is What I liked About The System

You can train under a variety of conventional and unconventional shooting positions. Get on one knee, lay on the ground, get behind the bed – whatever position you can conceive you can execute with this training system. It replicates real life and the situations you may face. You might not be able to find the perfect Weaver stance during a home invasion so practice the reality of imperfection and chaos.

Train under fatigue. It is easy to bring yourself closer to a point of failure and measure the effects of training before and after a workout or a run. You will be surprised how your times will vary throughout the course of the day. If you really want to simulate reality wake up and grab the gun in the middle of the night and take out the targets.

Measure the influence of drugs or alcohol. You can’t do this with a live firearm and let’s not pretend that people don’t drink or use drugs to go to sleep. You can use this system to measure the degradation of skills while under the influence.

Train in your own home where an armed confrontation could take place. I placed the targets in a variety of rooms and didn’t have any problems with the functionality. I even took the targets outside and the system worked just fine with my wireless connection.

Weak-hand training is where I found the largest benefit. I was able to use my left hand (weak-hand) to improve my grip and trigger pull.  After a few drills you can feel your brain adjust to weak-hand shooting which was amazing to experience. Weak-hand training is just not natural and I found I liked the AimWell system more than shooting my Buckmark .22 at the range. I’m positive the system has improved my weak-hand shooting with only a few days practice. I’m looking forward to some left hand range time after training with the AimWell system.

Low pressure training. Taking a beginning shooter to the range can be loud, confusing, rule encumbered and stressful. AimWell takes all stress off a beginner and allows them to focus on grip, trigger pull, sight picture and execution in a friendly environment. The only things missing are recoil and noise. Sight and hearing protection aren’t required to use the AimWell system – and you won’t be using those during a home invasion or a concealed carry situation.

There is an old saying that goes, “never quote price without establishing value or price will be too high.” The AimWell Laser Target System will set you back $599 for the system with three targets, the software and pistol. LEO’s get a 15% discount. That is a reasonable price for a lifetime worth of practice. Not to mention the system is just flat-out fun to use. Everyone who tried the system had a fun time and saw measurable improvement in their shooting skills.